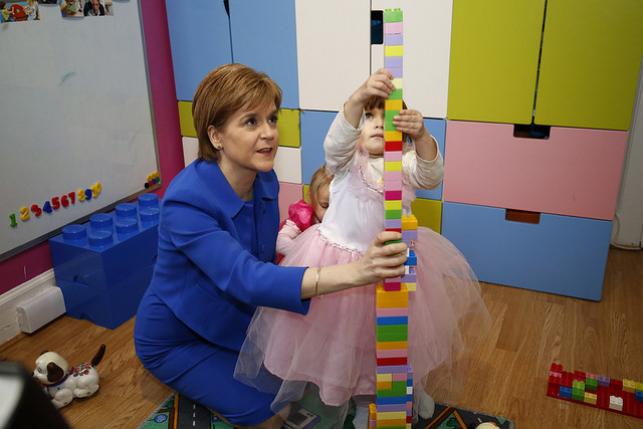 A radical change to the early years system is needed to offer an “equal start”, Unison and Common Weal have argued

FOLLOWING THE publication of an Audit Scotland report indicating that the Scottish Government is unlikely to meet its 2020 target of doubling access to funded childcare from 15 hours to 30, public sector trade union Unison and think tank Common Weal have renewed calls for a national public sector early years service.

Reporting on the Scottish Government’s ambitious plans for expanding free nursery places for three- and four-year-olds, and two-year-olds whose parents/carers are on qualifying benefits, public services watchdog Audit Scotland has said that there are “significant risks that councils will be unable to deliver that change in the time available”.

The reason, the report says, is the need for a considerably increased number of childcare staff and physical capacity, delays in setting the plans in motion, and an underestimation of the cost required compared with what local authorities are reporting.

READ MORE: An Equal Start: A plan for equality in early learning and care in Scotland

Unison and Common Weal have both previously advocated for the early years service – which is currently delivered by the public, private and voluntary sector – to be brought fully into public control, and both told CommonSpace that the need for this approach is increasingly apparent.

Head of research for Common Weal Ben Wray said: “The basic problem in the doubling of free childcare hours is: how do you significantly expand a sector that is already struggling with capacity issues?

“The early years and childcare sector is fragmented between public and private, has serious issues with low pay and inequality of pay, and has big divergences in standards, driven in part by the fact that the pay is so poor that it makes it difficult to incentivise childcare workers to pursue qualifications.”

In a 2016 Common Weal paper, authored by Wray along with several experts in early years and education, a vision was outlined for a National Childcare Service for Scotland. The report argued that the current system did not offer children an “equal start” in life, and warned against using that system as the basis for expanding funded places.

“Common Weal’s report warned that unless the Scottish Government took an approach to the delivery of 30 free hours of childcare which sought to address the structural problems in the sector, there was a danger that what is a very positive change ends up driving down standards in the sector,” Wray said.

“Two years later, the Scottish Government has not pursued an approach based on transforming the sector and the result is this damning Audit Scotland report.

“Common Weal’s proposal is to establish a National Childcare and Early Years Service, based on providing a publicly provided for place for every child in Scoltand. This would have unified standards and pay in the sector to ensure all children got an equal start.”

“There’s still time for this policy to be transformational, but a much more ambitious approach to delivery is required urgently.” Ben Wray, Common Weal

The paper highlighted that issues of capacity, funding and quality of provision would be significant barriers to achieving the expansion, but said that this could be successfully managed by creating a national service which would introduce: national pay rates for practitioners; a national rate for parent-paid hours; and nationally standardised opening hours of 9-6pm, during which time parents could be allowed flexibility on how to use their 30 funded hours.

The service would be managed at a national level in terms of standards and evaluation, while local authorities would be responsible for the delivery – much the same as with school education.

Wray added: “All the evidence shows early years is the most crucial time for a child’s development – there’s still time for this policy to be transformational in that respect, but a much more ambitious approach to delivery which understands the need to transform the sector is required urgently.”

She said: “Childcare is at the crux of three big policy areas – fighting poverty, supporting women into the workplace, and creating jobs for those who aren’t working.

“So you need to ask: What do you want childcare policy to be? What’s it for? If you want it to be about anti-poverty and reducing inequality – which the Scottish Government is focussing on – it needs to be in the public sector.”

This, she said, need not eliminate the option of private nurseries altogether, given that those who can afford it are still able to send their children to private schools.

Sillars was emphatic that the use of voucher schemes or extra funding for the private sector would do nothing to support an anti-poverty agenda. “That sort of policy just leads to greater inequality, as parents with more money will top it up and parents without that money won’t be able to,” she said.

“What the Scottish Government pays for a child in nursery is not what a private sector nursery charges,” she added, noting that the cost of private sector childcare can still be difficult for parents to afford, even with the funding.

“They’re already doing the 30 hours in England, delivered largely by the private sector and the nurseries are introducing charges for all sorts of reasons to keep functioning as a business,” Sillars said.

Aside from inequality for parents, Sillars said the mixed model system drives inequality amongst workers. “The private sector is awash with low pay,” she said.

“The Scottish Government are saying that in order to get public money you have to pay the living wage – this shows how low the pay currently is if the living wage is a pay rise.”

By contrast, she said, an early years practitioner can earn double the salary in the public sector, resulting in a staffing shortage within the private sector.

“The private sector is there to make a profit – that’s what it’s for.” Kay Sillars, Unison Scotland

Sillars was clear that Unison supports the proposed expansion of funded childcare hours, particularly given the difference this could make to supporting women into work.

She said: “Women have to earn, I think, £40,000 to make money while having children in full time childcare – for most women it’s not worthwhile working. We are the biggest organisation of working women in Europe so we fully understand the need for childcare.”

However she said, the expansion to 30 hours will be expensive and issues around workforce and capacity will need to be addressed.

“Having lots of different providers won’t help with that,” she argued. “The best way to do this is to coordinate it through councils – you can’t lose any money to profit. The private sector is there to make a profit – that’s what it’s for.”

Furthermore, she added, delivering the policy through the current system would lead to administrative difficulties. “The whole private sector procurement system will be a mess,” she said. “If you look at what’s happening with adult care, it’s going to be the same situation.”

However, depute chief executive of Early Years Scotland Jane Brumpton told CommonSpace that the membership organisation does not believe that moving to a fully publicly sector model is the solution.

“Parents welcome and want to have that choice, and they are already struggling to find places for their children.” Jane Brumpton, Early Years Scotland

“Early Years Scotland have over 12,000 members and a lot of those are voluntary and private sector, so we are very committed to the rich diversity of the early years sector in Scotland,” Brumpton said.

“It’s a very different system [to school education]; it is diverse and complex, but that’s what we should celebrate, and with expansion there is going to be even greater diversity.

“Parents welcome and want to have that choice, and they are already struggling to find places for their children.”

Brumpton emphasised that the organisation was “absolutely committed to the aspiration” of expanding funded childcare hours in a bid to reduce inequalities. “There is a direct correlation between high quality early years education for children and outcomes in later life,” she noted.

Brumpton added: “We do want all children to have an equal start, and for this not to be based on postcode. That’s our mission statement: we’re committed to providing the very best start in life for every child in Scotland.”

To this end, Brumpton said, Early Years Scotland wants to see the private and voluntary sector given greater support. “There is no doubt that the rates of pay local authorities are paying for places in the private sector needs to be increased,” she said.

In order to address concerns around requirements of the workforce, she said, Early Years Scotland has supported a recent campaign to encourage more people into the early years sector. “We are canvassing so that people see the value of the sector, and to attract more diverse recruits, including men,” she explained.

Brumpton said that a change in pay scales was one way in which a career in the early years sector could be made “more viable”.

“There does need to be more equitable pay scales, which would give early year workers flexibility and choice as well in whether to work in a private, or voluntary, or local authority nursery,” she said. “If there is a huge disparity between private and public sector pay, people will move.”

Responding to the concerns raised by the Audit Scotland report, childcare and early years minister Maree Todd said: “Despite the scale of challenge, we remain on track to deliver 1,140 hours by 2020.

“It is not unusual, at this point in the life of a major project, for people to have different ideas as to the final cost. What is not in doubt is that the Scottish Government has pledged to fully fund this policy.

“That’s why we are working with councils to help them develop their expansion plans and have recently reached agreement with Cosla on the process of arriving at the multi-year funding needed.”