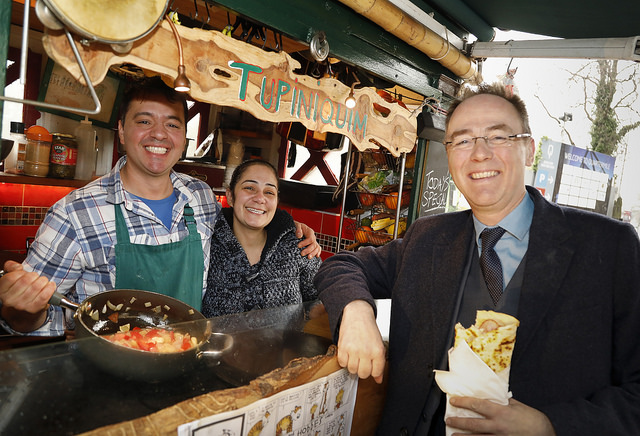 £328M PER DAY would be the price for the UK economy if all non-UK nationals did not show up to work according to a new report by the New Economics Foundation (Nef).

The report released today (Monday 20 February) coincides with a day of action #Onedaywithoutus that has witnessed Scots and other UK nationals campaign for the rights of EU and non-EU nationals living and working in the UK.

It was also found by Nef that key parts of the economy and state would not be able to function without the human resources and talent brought to bear by non-UK migrants.

Stephen Devlin, the senior economist at Nef, said: “Our research shows that if those born overseas were to down tools for a day, our whole economic system could grind to a halt. We urgently need to address the helplessness which so many people feel in the current economy.

“But we will not do that by succumbing to hatred and xenophobia. So today let’s celebrate the contributions made by everyone, no matter where they were born.”

The UK economy’s daily GDP would fall by 4 per cent if all non-British citizens stopped working for 24 hours according to the research.

Additionally, this was backed up more figures showing that up to 26 per cent of health professionals are migrants outstripping the average presence in other areas.

EU nationals have faced increasing threats of uncertainty and insecurity as the UK Government refuses to give a cast iron guarantee that they will have right to stay and work. Many that have set up businesses, families and contribute to the UK’s society have been left in a state of paralysis as the UK Government pauses until negotiations begin to give any assurances.

“Our research shows that if those born overseas were to down tools for a day, our whole economic system could grind to a halt.” Stephen Devlin

Response from Scotland was given from the SNP who have maintained their commitment to EU nationals in addition to those from non-EU background.

SNP MSP Stuart McMillan said: “These are just the latest warnings that Brexit is going to have a harmful impact on our economy – and Theresa May’s complete failure to provide clarity is making things worse. A hard-right Tory Brexit threatens to cost 80,000 Scottish jobs and cost Scotland’s economy by up to £11 billion a year by 2030.

“But the Tories seem determined to take us down the route of a harmful ‘hard Brexit’ regardless of the impact.”

When contacted by CommonSpace, the Scottish Conservatives declined a statement but instructed comment to be taken from the UK party in Westminster.