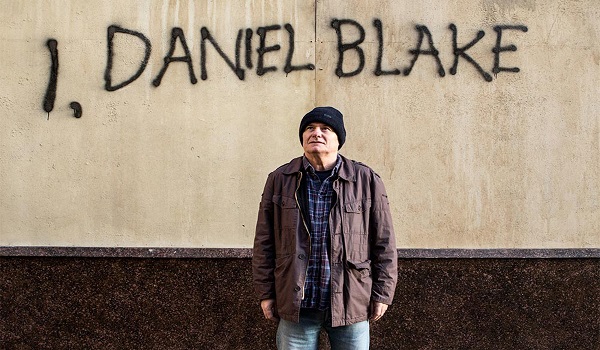 Writer Neil McLeod says Ken Loach's new movie, 'I, Daniel Blake', shines a stark light onto the brutal real-life experiences of those struggling the most in society

The hashtag #wearealldanielblake has been trending on Twitter with people telling their stories of negotiating the labyrinths of the UK benefits system. Many people see the film as a rare reflection of themselves and the world they live in and, as always when this happens, rightwing commentators and critics simply deny this reality.

The Times' film critic Camilla Long dismissed the film as "a povvo safari for middle class people". Pretty much the only people who would use, or have even heard, the slang "povvo" would be the type of people who would dream of literally going on a safari with the Duke of Westminster where they could shoot at homeless Glaswegians and teenage single mothers, probably before going on to drown unreliable servants at Henley regatta.

"I’m no expert in the welfare system," columnist Toby Young blithely stated in the Daily Mail before charging headlong into a set of utterly inaccurate claims stated as fact.

It’s like me negatively reviewing a Brian Cox documentary by saying: "I’m no expert in astronomy but I find what Cox is saying about the prograde orbits of Saturn’s moon wildly implausible."

It might seem extreme to take the views of two Oxbridge-educated hacks as an example or prevailing viewpoints on benefit claimants but their sentiments are sadly rather mainstream.

Inaccuracies, lies and misconceptions abound, leading to shame and stigma for those claiming state benefits. It’s the reality portrayed in Loach’s film that can help us overcome this and protect a system that has been invaluable and life-saving for the past seven decades.

I don’t blame Young or any other commentators who fail to grasp the intricacies of the benefits system. I worked in welfare rights for over 20 years and keeping up to date with the continual changes was an endless task. Sisyphean, one might say.

"I’m no expert in the welfare system," columnist Toby Young blithely stated in the Daily Mail before charging headlong into a set of utterly inaccurate claims stated as fact.

In Greek mythology, Sisyphus was forced to roll an immense boulder up a hill only to watch it come back to hit him, repeating this action for eternity, presumably either as part of a fit-for-work test by an ancient Greek Atos or a punishment for missing his signing-on appointment at the Parthenon.

I don’t necessarily consider myself an expert , but after much of two decades of providing benefit advice, and three periods of claiming benefit, I’m more of an expert than Toby Young.

He asserts that a decision that a claimant is fit for work can be appealed as soon as a letter is received informing them of the decision. Wrong again – a mandatory reconsideration from a DWP decision maker has to be sought prior to any appeal.

This can take some weeks, or even months, while the claimant is left in limbo and at the mercy of charity and foodbanks.

Young and Long are incredulous at the Kafkaesque nature of the system, but that sadly isn’t an issue of far-fetched plotting in a film, it’s grim reality. They can’t believe Daniel Blake is representative of real people because he "listens to Radio 4 and classical music, and isn’t shown drinking alcohol and smoking".

It’s like me negatively reviewing a Brian Cox documentary by saying: "I’m no expert in astronomy but I find what Cox is saying about the prograde orbits of Saturn’s moon wildly implausible."

I can confirm to them the dizzying fact that some benefit claimants listen to opera and some listen to techno, some read Thomas Hardy and some read Take a Break, because they are all individuals with different and varied tastes and attitudes. Not some homogenous, faceless mob.

"She is more like a Dickens character than a resident of 21st-century Britain, the fourth richest country in the world," Young complains of one of the film's characters, ironically failing to grasp that that is indeed one of the points that the film is making: that we are in the new quasi-Victorian age of deserving and undeserving poor, punishment and reliance on charity.

Young continues incredulously to fume: "Daniel’s experience of trying to claim Employment and Support Allowance (ESA) is also a little implausible. Would a middle-aged man who’s just had a massive heart attack really be declared 'fit for work' by the Department for Work and Pensions?"

Yes, in my direct experience and in the experience of anyone who has worked in welfare rights, this would be a very typical example. I would estimate that in one year, the office I worked in in North Glasgow would deal with dozens of Daniel Blakes – people living with, and in some cases ultimately dying of, serious conditions which failed to tick any of the boxes entitling them to be classed unfit for work, but while they were clearly not actually fit enough to adhere to the rigorous demands of a jobseeker’s agreement.

One extreme but far from unique case which was reported (but not widely) in 2013 was Linda Wooton, 49, who was on 10 medications a day after a double lung and heart transplant.

In one case I had a client, whose son had been murdered, initially assessed as not having a mental health problem because his anxiety was based on an "actual event, not an unjustifiable fear".

She was weak and suffered regular blackouts. She was nevertheless put through the Atos Work Capability Assessment, and as she lay in a hospital bed dying, she received confirmation she was 'fit to work'.

It’s perhaps no wonder that several critics and commentators find the world encountered in 'I, Daniel Blake' unbelievable. I sat next to hundreds of appellants over the last decade and represented them as they faced a tribunal on reinstating their benefits and I still managed to find myself incredulous at some of the decisions I encountered.

Perhaps the mental health assesments are the worst. Clients are regularly caught in a catch-22 situation: too uncommunicative at assessment and they’d be judged too vague to get sufficient information from, but too articulate and they’d be viewed to have an insufficient problem with social interaction to be judged sufficiently depressed. Simplistic bullshit like "no rocking movements visible: rocking indicates anxiety".

In one case I had a client, whose son had been murdered, initially assessed as not having a mental health problem because his anxiety was based on an "actual event, not an unjustifiable fear". On such flimsy, palpably ludicrous decisions, lives hang in the balance.

I’m not going to pretend I’ve never met anyone who was 'at it', who didn’t feign a mobility problem or exaggerate the state of their depression in an effort to get a few extra quid. But they were the tiny minority. A minority who, incidentally, always seemed to have the knack of keeping their benefit as genuinely sick people lost out.

It’s notable that this era of austerity-packaged cutbacks and clampdowns has seen a marked decline in support for benefits spending, as highlighted in the British Social Attitudes Survey.

Young asserts that the benefits budget rocketed under the last Labour government, and it’s tacitly suggested that this is due to escalating costs of sickness and disability benefits.

But it isn’t correct. The rise in spending is due to the rising number of older people receiving state pension and pension credits. State pension accounts for 42 per cent of the total welfare spending, around £108bn. Sickness and disability benefits account for 16 per cent, and unemployment a mere one per cent.

When I first worked in a Citizens Advice Bureau, John Major was prime minister and we thought that during the introduction of Incapacity Benefit, Jobseeker’s Allowance and Disability Living Allowance we were in the midst of a terribly regressive regime. In retrospect, it looks like a utopia in comparison to what has come since.

It’s notable that this era of austerity-packaged cutbacks and clampdowns has seen a marked decline in support for benefits spending, as highlighted in the British Social Attitudes Survey.

In 1993, only 24 per cent of people thought claimants did not deserve help. That has recently grown to nearly 40 per cent. The unemployed bear the brunt of scorn, with 48 per cent stating that less should be spent on the unemployed when in reality only one per cent of the welfare budget is spent on Jobseeker's Allowance.

It’s the stark absence of films and TV dramas like 'I, Daniel Blake' that have allowed the country to accept the scapegoating and old fashioned divide and rule. If you don’t see the human face you can easily continue to demonise.

It’s the stark absence of films and TV dramas like 'I, Daniel Blake' that have allowed the country to accept the scapegoating and old fashioned divide and rule. If you don’t see the human face you can easily continue to demonise.

It works, even among those claiming benefits there is a common misconception that those with different health problems get more. "If I was a junkie/alcoholic/in a wheelchair, I’d get everything," is a frequently heard lament.

The attacks on benefit claimants, particularly on the unemployed and the sick and disabled are part of the same sordid tapestry of lies and hate the government uses to attack refugees, spun to pull the wool over our eyes and blind us to reality.

'I Daniel Blake' is performing a hugely beneficial role in tearing off that which obscures our view of the real enemy: inequality and a government run for the interests of the few, intent on punishing the poor so the rich don’t suffer for the capitalist crisis they alone created.

If we don’t grasp that reality before it’s too late we could lose the welfare state that, for generations, has given us the helping hand we needed.