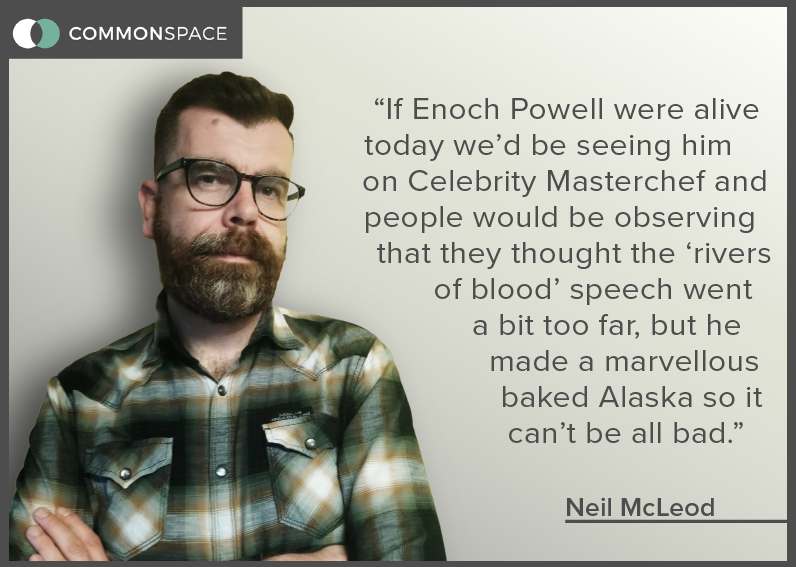 CURRENTLY playing in UK cinemas, the saccharine sweet romantic comedy ‘Yesterday’ posits an alternate reality where the protagonist wakes in a world in which the Beatles did not exist and takes advantage of the public’s ignorance to pretend he wrote the tunes, propelling himself to success.

Currently playing in reality throughout the UK an altogether more horrific event: a ‘Yesterday’ in which millions of people appear to have forgotten the advances of the 20th century and seem happy to return to the 19th century, unfamiliar with the pitfalls of being led by the political aristocracy for their own nefarious self-interest, resulting in Boris Johnson taking advantage of the public’s ignorance and becoming front runner for Prime Minister.

It seems that huge swathes of England and a significant enough portion of Scotland have unremembered the progress that saw the UK move from the workhouse to the welfare state. From a prolonged era in which the upper classes were seen disparagingly as donkeys leading lions, bumbling P.G. Wodehouse characters, psychologically damaged, the inept but entitled comic relief have been rewritten as heroic in a demented twenty-first century boy’s own ripping yarn.

A warped nostalgia for a past and a place that never existed in reality, the days of empire and the blitz spirit have proven a fertile substitute for actual policies. Brexit and the rise of Johnson are symptoms of this tactic.

To a large extent of course the privately educated descendants of old money have remained in control of the civil service and judiciary throughout the supposedly more meritocratic era, regardless whether the PM position was held by McDonald, the son of a farm labourer, or Major, the son of the circus. Now there seems to be no great need to hide the privilege behind a mask of commonality. Another old Etonian is poised to takeover three years on from the last old Etonian PM.

READ MORE: 8 times Boris Johnson has made bigoted remarks – and faced no consequences

There may be a fair amount of validity in the observation that it makes little practical difference that a government includes those from a working class background if it is represented by the ‘semi-house trained polecat’ Norman Tebbit and his cohorts in the Thatcher administration. That regime saw some of the lowest rates of old Etonians in government history alongside some of the greatest attacks on traditional working class areas. However, it does say something deeply worrying about what we are prepared to find acceptable in our leaders, a symbol of what the New Statesman called in a recent editorial “the unseriousness of our politics, the enduring dominance of British public life by those educated at elite private schools”, and it comes hand in hand with an increasingly unequal society and a rolling back of social mobility.

Recently, the Sutton Trust and the Social Mobility Commission published a new report, Elitist Britain 2019. Only 7 per cent of the UK population are privately educated but 65 per cent of senior judges, 59 per cent of civil service permanent secretaries and 39 per cent of cabinet ministers fall into this category.

While the political and economic malaise that we find ourselves in has many causes, the fact that Johnson is promoted as a viable solution is largely the result of years of unquestioning mainstream media exposure of the humorous, cheeky chappie character continually referred to mononymously simply as  ‘Boris’, like we should all be on first name terms with him. Subliminally suggesting that yes, he’s a multi-millionaire wielding power and influence, but he’s avuncular, charming and trustworthy

The mainstream media have performed the role of Johnson’s PR team. In the case of the Daily Telegraph and the Daily Mail intentionally, in the case of TV channels, we must assume more unwittingly. Like Gipetto and Doctor Frankenstein collaborated and animated what they thought was a mere puppet that came to grow a life beyond them, and one in which with every lie spun his stature grew bigger, as did the lies. Lies so huge they are literally the size of a bus with funding the NHS to the tune of £350 million emblazoned on it.

From early appearances on ’Have I Got News For You’, the BBC has been an accomplice in building his larger than life personality into a brand that obscures the blunt and unglamourous, old fashioned neo-liberal policies that he advocates.  The BBC are repeat offenders. Certain sections of the left adopt a defensive attitude to the BBC to avoid providing ammunition for enemies of public broadcasting and open the floodgates to the Murdoch empire. But perhaps the real threat to the Corporation has never been in the loss of its charter or a sudden extinction but in the more gradual and invidious erosion of the values of informing and educating that it purports to be founded on. The desperation to be seen as non-confrontational has led it to pander to the right.

That includes assisting in breathing political life into Farage, again initially via the light entertainment oxygen of publicity on ‘Have I Got News For You’ then by giving him a seemingly endless platform on Question Time. Similarly Ann Widdicombe is viewed as an eccentric maiden aunt thanks to Strictly Come Dancing, rather than a regressive religious fundamentalist conservative who thinks homosexuality might one day be ‘cured’. If Enoch Powell were alive today we’d be seeing him on Celebrity Masterchef and people would be observing that they thought the ‘rivers of blood’ speech went a bit too far, but he made a marvellous baked Alaska so it can’t be all bad.

Farage and Johnson are usually portrayed as affable, bloke-ish sorts who like a laugh and a pint down the golf or rugby club while Corbyn is viewed as a killjoy and a ‘hardliner’ like a Stalinist Victor Meldrew, drinking herbal tea on his allotment and plotting to abolish Christmas.

Such is Johnson’s privileged position in the media that no sooner were the reports of his domestic disturbance surfacing than there were the likes of Alison Pearson being given column inches and airspace to question the political leaning of the neighbours who reported the incident. No deliberation of the actual events and what this may or may not say about Johnson as a person were deemed necessary. It would barely be extreme to imagine a scenario where Boris Johnson was picked up by the police with ten grams of coke, only for the tabloids to lead with an investigation into the alleged Guardian reader who supplied it.

Johnson is in many ways a British version of Trump, not just because they seem to be from the same species of delusional entitled right-wing megalomaniacs with appalling mops of hair, but because they were created by the same political disaffections and operate in a similar manner. Like Trump, Johnson cannot concentrate for long, says and/or does laughable, cringeworthy things at serious moments and has no vision except of his own advancement. His warped cleverness is to turn his incompetence into a joke, but beyond the scripted and rehearsed humour the incompetence is real. The only sense in which he is smarter than he looks is in continuing to sell this schtick. Again, he needs the complicity of the media to achieve this.

In an echo of the media coverage of claim and counterclaim during the EU referendum campaign there is little real analysis, no presentation of the facts and figures to polish the dirt of propaganda off and find the kernel of truth buried within. Research by Cardiff University in 2018 found that false statistical claims in Brexit debates and news coverage were challenged in fewer than one in five cases, and so it goes with Johnson’s claims during his leadership campaign.

He knows he cannot renegotiate a new withdrawal agreement by 31 October. He knows there will then be no legal alternative to a tariff wall and a barrier with the EU, yet he just keeps repeating the lies to the contrary without any significant scrutiny from traditional broadcast media. Yet the facts are rarely highlighted. There’s similar scant scrutiny over his lengthy record of racism, homophobia and bigotry and his two dismissals from employment for dishonesty.

It’s worth noting the observations of Henry A. Wallace, the US Vice President from 1941-45, who observed in a succinct and prophetic manner that the American fascist would not use violence to achieve power: “Their method is to poison the channels of public information,” Wallace said.

Trump has shown, seventy years later, just how right Wallace was and his conclusion also serves as an observation of the tactics of Johnson: “The problem is never how best to present the truth to the public, but how best to use the news to deceive the public into giving the them more money or more power”.