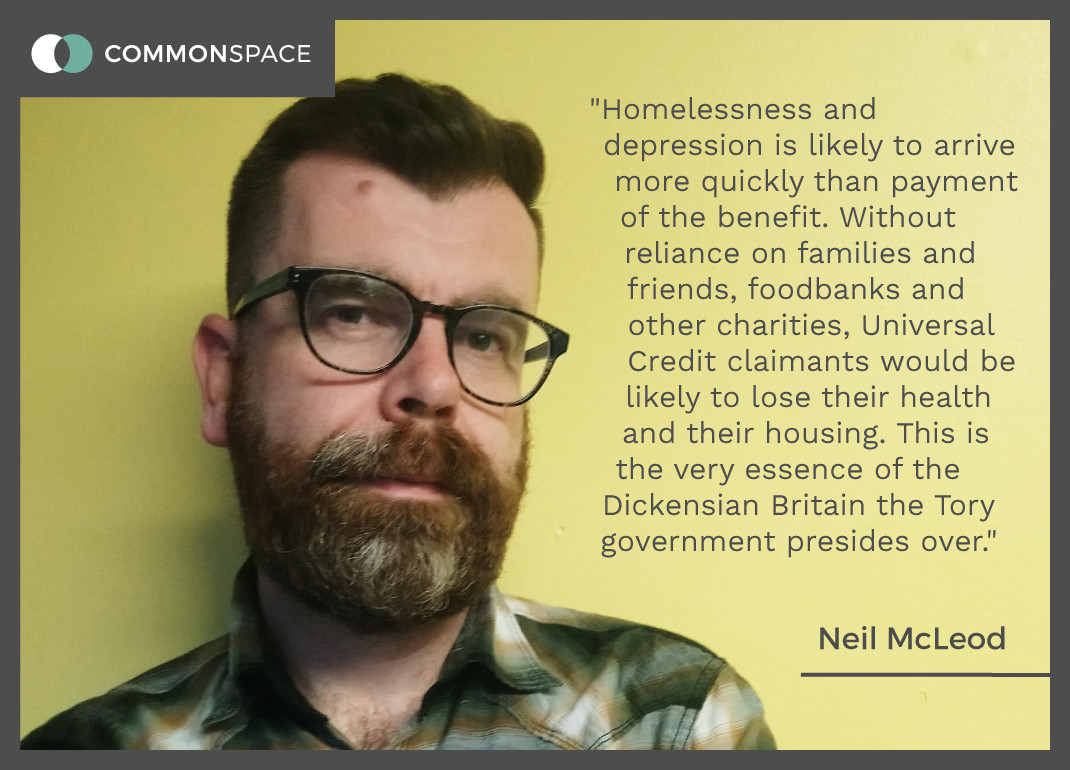 CommonSpace columnist and former welfare rights worker Neil McLeod argues that Universal Credit is the very essence of Dickensian Tory Britain, a benefit that will bring you homelessness and depression quicker than it will actually get paid

ON 15 JUNE, with little media coverage, filtered out to a nation beaten down by news of Trump’s latest atrocities and the latest Brexit shambles or anaesthetised by the World Cup and Love Island, the National Audit Office published a highly critical report into the implementation of Universal Credit, the Government’s flagship benefit reform policy.

Universal Credit merges six benefits (Income Support; Income-related Jobseeker’s Allowance and Employment and Support Allowance; Housing Benefit; and Child and Working Tax Credits) into one. Simplifying the complexities of the benefits system all sounds fine in theory but in practice the built-in delays in payment, with six week waiting periods for initial claims and IT issues that caused a massive initial overspend has led to the £1.9 billion Universal Credit system ending up costing more to administer than the benefits system it is replacing.

Eight years after implementation of Universal Credit began still only 10 per cent of the expected eventual number of claimants are on the system and significant numbers of those are not paid on time. Some 20 per cent of those paid late, usually the more needy and complicated cases, have waited a staggering five months or more to be paid. These aren’t early teething problems as now, eight years after the first introduction of the benefit one-fifth of new claimants in March 2018 did not receive their full entitlement on time.

Indeed homelessness and depression is likely to arrive more quickly than payment of the benefit. Without reliance on families and friends, foodbanks and other charities, Universal Credit claimants would be likely to lose their health and their housing. This is the very essence of the Dickensian Britain the Tory government presides over.

Meg Hillier, chairwoman of the Public Accounts Committee, said UC had been “one long catalogue of delay with huge impact on people’s lives” and the Child Poverty Action Group questioned whether the government should push on with a programme that was “demonstrably failing”. It’s like the government has taken the maze of the benefits system and turned into some kind of MC Escher creation from which it’s impossible to navigate a way out. A bureaucratic monstrosity even Kafka or Orwell could have failed to describe accurately.

Dame Louise Carey, an adviser on social policy to four prime ministers in the last 18 years urged a rethink several months ago, likening the policy to jumping off a cliff and warned it “will end up in dire circumstances, more dire than I think we have seen in this country for years”.

Anyone with a working knowledge of the benefits system could have told the government this would happen all along. In fact they did so, repeatedly. When the reform was introduced in 2010 I was working in welfare rights in Glasgow and was at consultation meetings where problems were highlighted but there was never any interest in letting the facts get in the way of a blinkered desire for change at all costs. This is the fatal foolhardiness of this and much of the Government’s other pseudo-reformist austerity package.

The man who epitomised this belligerent approach is the architect of welfare reform, Iain Duncan Smith, although ‘architect’ implies competence that fails to match the reality. An architect would possess a professional qualification and a detailed and viable blueprint. Universal Credit is more like the equivalent of a house drawn in crayon by a four year old that someone has had the ego and temerity to build it despite having no load bearing walls or foundations and being perched atop sand: a crumbling showpiece of Tory austerity.

Duncan Smith is a man who spent years in opposition popping up in places like Easterhouse, sagely lamenting the need for reform, supposedly becoming an expert but then concocting and implementing a system that contained the same level of expertise and insight as something a Daily Mail reader might scrawl on the back of a fag packet in a particularly irate and short-sighted burst of misplaced anger.

The ever-drifting timescale for full implementation highlights the ongoing ‘teething troubles’ of system that should be near maturity by now.  It originally had an October 2013 start date then kept being delayed by years as the reality of the shortcomings became apparent. Rolling out of Universal Credit initially occurred in the sort of sleepy English villages that have an unemployment rate lower than Camberwick Green as the DWP knew full well that attempting to introduce the benefit in towns and cities with large numbers of unemployed, sick and disabled living in rented accommodation with dependents would cause exactly the catastrophe we are seeing now.

READ MORE – UK welfare policy is pushing Scots into poverty: What can the Scottish Govt do to alleviate the suffering?

With regard to cost effectiveness, Universal Credit currently costs £699 per claim – four times as much as the government intended to spend when the systems are fully developed. The National Audit Office report states that “Government expectations that UC would deliver £8bn of net benefits annually depended on “unproven assumptions”.

However, the truth of the matter is that Universal Credit was never intended to be the Government’s flagship benefit policy but it’s flagship divide and rule policy, and in that regard its own internal audit would say it is providing value for money. To be seen as being hard on the feckless and workshy is worth every penny to Iain Duncan Smith and his acolytes.

The public perception of benefit fraudsters, malingerers, single parents, immigrants coming simply to drain the system are the scapegoats built up through years of print and broadcast propagandizing. This has had the desired result with the British Social Attitudes Survey showing a majority still think benefit spending is too high and discourages people from finding jobs, with Conservative voters the figure believing this to be the case is as high as 70 per cent. If it’s a choice between carrot and stick, the stick is favoured each time.

The truth is the biggest obstacle to people being able to find work is not a cosy, overly generous benefits system but a lack of actual jobs. In my lengthy experience working in some deprived communities in the North of Glasgow, where successive governments have quite conveniently and contentedly left swathes of the population on the scrapheap for multiple generations, the main barrier in becoming employable was as a result of fear not laziness.

Lack of economic and social opportunities leads to a lack of skills and confidence and therefore some benefit claimants end up in a comfort zone where staying on benefit is the least worst, least stressful option. Punitive measures to restrict or remove benefit are only going to exacerbate this.

What it would take to overcome this is a hugely costly programme of assistance providing training in practical and interpersonal skills, literacy and numeracy alongside counselling to combat the mental health problems and all the massive societal issues that no government or opposition has yet had the vision to outline.  Another of the real tragedies of the situation therefore is the money wasted on Universal Credit could have been spent on this kind of proactive development of life chances, offering a helping hand instead of an iron fist.

Only when we stop seeing those affected by government policy as justifiable collateral damage and overcome the cliché and false perceptions that stop us holding the Government to account on benefit reform will we be able to move forward and implement a welfare system that is just and fair and fit for the 21st Century.