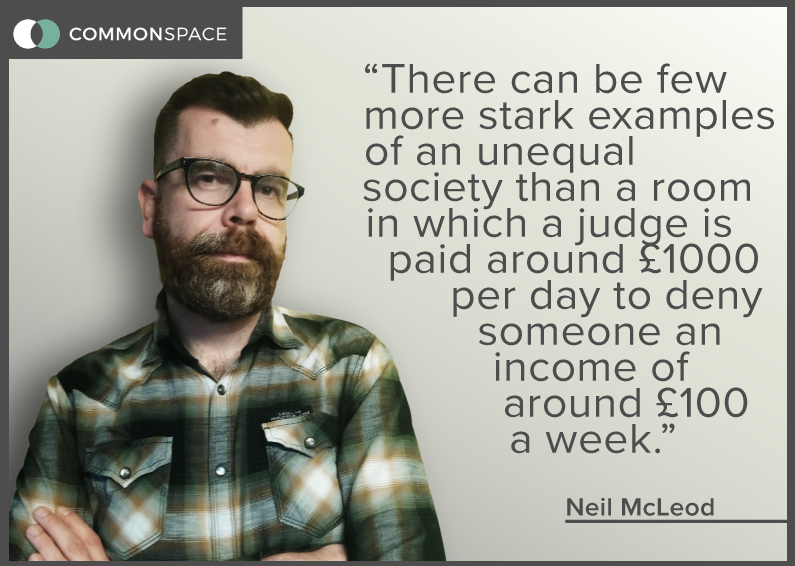 CommonSpace columnist and former welfare rights worker Neil McLeod looks at the benefits appeals system, which has skyrocketed in cost to the government due to the huge number of appeals being lodged against incompetent and callous DWP sanctions

DO WE need any more evidence that even in times of austerity money is no object to the government when it comes to keeping the poor in their place? If so, we had a textbook example at the end of August as it was revealed that £200 million had been spent defending sickness and disability benefit appeals in the last five years.

The costs have been increasing drastically every year. During a period of supposed belt-tightening the government have been loosening theirs further. Personal Independence Payment reconsiderations and appeals have risen from a comparatively frugal £292,435 and £147,164 respectively in 2013/14 to a gut-busting £17,847,514 and £20,123,668 respectively in 2017/18. In addition to the cost to the DWP, the running of the tribunals is funded by the Ministry of Justice, which spent £103.1m on social security and child support tribunals in 2016/17 alone.

In less vexing times this would have provoked more anger and something of a backlash. The danger now is people are so used to one more piece of objectionable but predictable and stereotypical Tory behaviour that it ceases to actually cause objection and simply more of a resigned sigh and shrug. People barely stop to process the reality and severity of what all this entails, which is basically that some of the poorest and most vulnerable members of society are being, in quite calculated way, victimised and denied benefit to which they are entitled for as long a period of time as possible.

As this government has already proven with Universal Credit, they’ll continue to throw money at systems that don’t work and throw more money at defending the indefensible. They now seem like a bunch of aristocrats in a crumbling country estate, lacking apparent wherewithal to protect the leaking roof and shaky foundations but willing to spend a small fortune on some shiny new implements with which to beat the servants and peasantry.

The number of successful appeals is a clear illustration that neither of the flagship benefits actually succeeds in securing an award for those who meet the criteria. Personal Independence Payment (PIP) was introduced to replace Disability Living Allowance for most disabled benefit claimants of Employment and Support Allowance which replaced Incapacity Benefit for those unfit to work

In the first half of 2017-18, 66 per cent of PIP appeals and 68 per cent of ESA appeals went in favour of the claimant. The percentage of cases lost by the DWP on appeal has been steadily increasing as new benefits have been introduced. In 2007 a minority, 44 per cent of all cases, went against the DWP, ten years later that figure was 61 per cent. The eventual decisions to award the benefit are welcome but usually come after six months to a year of waiting, struggling to cope financially, physically and emotionally with having less than a pittance to live on and effectively being called a liar by a government department who are denying the extent of your sickness and disability.

The main contributing factor to the delay is the fact that before an appeal can be heard the DWP itself has to revise its verdict via a ‘mandatory reconsideration’ in which a Decision Maker who is employed by the DWP looks again at the award and supposedly ensures the regulations were correctly applied.  However, they are under pressure to refuse the vast majority of reconsiderations. In May last year, a Freedom of Information request revealed staff conducting mandatory reconsideration reviews were held to a “key performance indicator” that said “80 per cent of the original decisions are to be upheld”.  In other words, don’t let the facts of each case get in the way of statistics.

This situation is compounded by the fact that the DWP disposed of experienced staff via early retirement and redundancy and replaced them with cheaper, inexperienced staff unfamiliar with decision making process. Starkly illustrated by the fact I once had a discussion with a staff member who said “what you say may be true, but you have to remember you’re talking to a layman here”.

Britain’s most senior tribunal judge last year claimed that most of the benefits cases that reach court are based on bad decisions where the Department for Work and Pensions has no case at all. Sir Ernest Ryder, senior president of tribunals also stated that the quality of evidence provided by the DWP is so poor it would be “wholly inadmissible” in any other court.

Sometimes challenging DWP decisions is as taxing as marking a five year old’s homework, so riven with basic errors are they. I could go for weeks or sometimes a couple of months without losing a Tribunal case, not through any great advocacy skill but simply because the DWP decision-making was poorly justified or not even justified at all. Medical evidence from healthcare professionals who knew and treated the claimant had been overlooked or cast aside and credence given instead to rudimentary assessments, usually lasting between 10-30 minutes by a nurse employed by companies such as the infamous ATOS and justified on the basis they were ‘impartial’ and ‘independent’.

There are shades of grey here, as in all areas of life it’s not a clear distinction between good guys and bad guys. Many DWP staff are also victims of the system rather than arch villains. Cogs in the machine, not its designers. Stuck in a labyrinthine bureaucratic nightmare they can’t negotiate their way out of. Knowing all too well the sanctions they’d inflicted would fall on them should they themselves quit or fall sick.

To qualify for a sickness and disability benefit a claimant will have to meet a certain criteria outlined in the regulations, known as descriptors. These are notoriously inflexible, arcane tests of ability that mostly bear no relation to the unique circumstances of individuals, the inconsistencies and variations in their condition and how these concretely affect them on a day to day basis.

Those with mental health problems are particularly poorly served by the system, which takes scant regard to the changeability of their conditions. I frequently saw clients refused simply because they had coped with the assessment, interacted with the healthcare professional sufficiently to be coherent and not rocked backwards and forwards which, the Decision Maker said, ‘indicates anxiety’. Displaying the subtlety and understanding of someone whose sole understanding of mental health issues was that they had once watched ‘One Flew Over the Cuckoo’s Nest’

There are strange and unhelpful divisions between mental and physical health issues, and seemingly semantic but hugely important debates to be had over the frequency of a claimant’s ability to interact socially and whether their ability to do or not do something is ‘rational’. In one particularly stark example a Tribunal once ruled that one of my client’s fear of going out to a particular area was perfectly rational as his son had been murdered there and the client himself threatened and that as this fear was based on an obviously traumatic event and a genuine possibility of his own physical endangerment it ‘wasn’t a mental health problem per se’ and did not result in the award of benefit as somehow a ‘genuine fear’ was construed not to be a psychological issue. This unique hybrid of Kafkaesque pedantry holds sway in DWP decision making.

READ MORE – Paul Spicker: The Scotland Act and the loophole on benefit sanctions

Even though the Tribunal system could be said to work when simply looking at the number of successful appeals, in fact this is a flawed system too. There’s a ‘luck of the draw’ approach to justice at play at Tribunals. Anyone with experience of Tribunal representation will tell you there are a few judges in each area with which it is virtually impossible to win an appeal and seem to make it their mission to prevent anyone winning their case. For every considerate and balanced judge, there’s one who wields their power in a self-aggrandising opportunity to belittle someone else. They will use their legal knowledge to construct an expertly worded judgement to justify their decision and prevent it being challenged further on grounds of law.

Tribunals, even when deciding in favour of a claimant is an unnecessarily traumatic experience, steeped in formality and legal jargon. It effectively treats a benefit claimant as if they have done something wrong and are lying unless and until they can demonstrate otherwise. There can be few more stark examples of an unequal society than a room in which a judge is paid around £1000 per day to deny someone an income of around £100 a week.

There will be no change to this unrelenting, alienating system in the foreseeable future. It’s too complex, time-consuming and expensive to overhaul and, despite the fact that the effects of the system are all around us in terms of the poverty and social problems that ensue, it’s a largely and conveniently neglected issue, both by political parties and the mainstream media.

We can’t begin to adequately address the problems of inequality and exclusion and mental health unless those multiple millions spent on the bureaucracy of denying benefit is instead devoted to thoroughly restructuring the system. Sickness and disability benefits need to be completely overhauled, from the basis on which they are awarded, decisions made and appeals held, at each stage with the involvement of disability rights groups and those with welfare rights experience.