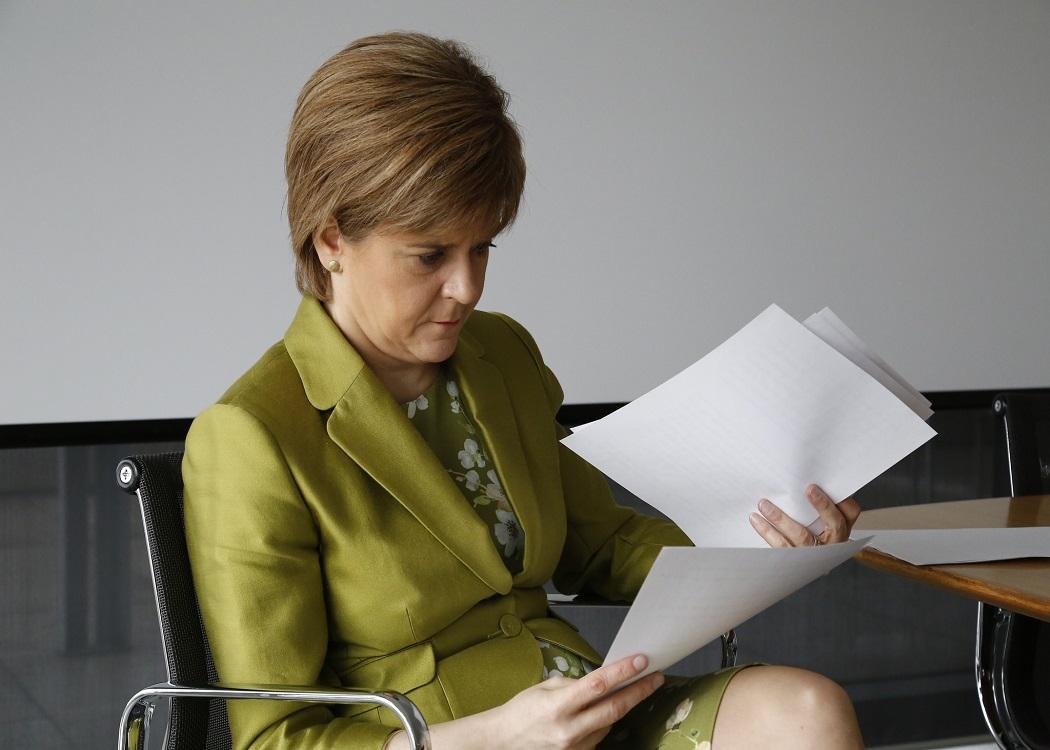 AT the end of the week of the Hillsborough verdict and the accompanying rekindling of national distaste for the Sun and all it stands for, the sight of Nicola Sturgeon smiling like a proud mother holding a copy of the Scottish Sun’s SNP-endorsing front page last weekend was particularly unedifying.

For a great many it was obviously so unedifying that they simply refused to believe it was real. In a shining example of the more delusional capabilities of social media, by Sunday evening the virtual world was awash with shares of what purported to be the original, undoctored photograph of Nicola Sturgeon holding a copy of the Dandy, and those who had shared or commented critically on the Sun photo were lambasted as nothing but unionist stooges who’d believe anything they read in the tabloids – unlike those proud defenders of the truth who apparently believe anything they read on social media, clearly.

You get the feeling that Sturgeon could literally be caught red-handed stabbing a granny and if the photo was published on the front page of a tabloid, within minutes there would be a new photo doing the rounds on Twitter with her knife replaced by a sandwich and a story about how she was feeding the old dear.

It’s interesting that so many SNP supporters are simultaneously scathing of the Sun and unwilling to believe that Sturgeon would willingly pose with its front page. Typical comments on Twitter and Facebook were along the lines of “there’s that disgusting right-wing rag, lying again, photoshopping oor Nicola into a picture for their own nefarious ends”.

What this is effectively overlooking is the long history of the SNP courting Murdoch, that the Scottish Sun endorses the SNP and would not (for the time being) intentionally seek to draw negative publicity to its leader. Yet the reality is lost in a knee-jerk, knicker-twisting frenzy of condemnation of daring to question the infallible SNP leadership, even if you actually qualify any criticism with the proviso that you do actually vote SNP.

Sturgeon herself has steadfastly avoided any invitation to clarify that the Sun photo is genuine. Possibly because, despite the obvious truth of the matter, silence on her part leaves a significant number of SNP supporters free in their belief of a nasty photoshopping smear.

Typical comments on Twitter and Facebook were along the lines of “there’s that disgusting right-wing rag, lying again, photoshopping oor Nicola into a picture for their own nefarious ends”.

Interestingly, the mainstream media, so often seen as endemically anti-nationalist, have failed to give any detailed coverage of the online furore and any deeper meaning that may be read into it – one exception being the Herald article published on 3 May detailing the resignation letter of former Labour MEP Hugh Kerr who has left the SNP in light of Sturgeon’s “endorsement” of the Sun.

He states: “I will continue to support the SNP where appropriate but would warn against being corrupted by power. I saw this in New Labour where gaining power for its own sake became the objective rather than using power to change the world.”

One of the few comments made by an established SNP figure (albeit again only on social media) came from John Nicolson MP who, while saying that he hadn’t spoken to directly to Sturgeon on the matter, defended the relationship with the Sun, saying: “It’s important we use every outlet to get our message across,” and asking, “is it fair to punish Scottish journalists here for something Kelvin MacKenzie did down there 27 years ago?”

Nicolson’s response is breathtakingly naive or breathtakingly disingenuous. While MacKenzie’s editorship of the Sun and the Hillsborough coverage is the most notorious in the newspaper’s history it is was not the problem, just a symptom of a bigger one: Murdoch.

Quite separate from the Hillsborough coverage, the Sun in both its UK and Scottish editions remains a reactionary anti-trade union paper with questionable coverage on gender and race.

While MacKenzie was the Darth Vader of journalism, Murdoch and News International as a whole were the Empire and they remain the root cause of the spread of ignorance and deceit.

Quite separate from the Hillsborough coverage, the Sun in both its UK and Scottish editions remains a reactionary anti-trade union paper with questionable coverage on gender and race. It’s no wonder that so many SNP supporters have a problem accepting their leadership’s willingness to embrace it.

This highlights the shortfall in what the SNP leadership purports to be and what it actually is. The march to the right of all the other mainstream parties and the democratic, inclusive civic nationalism of the independence campaign quite rightly and understandably saw a surge in membership and support for the SNP.

This was a support for anti-austerity and redistribution of wealth almost as much as it was for independence, and the more than admirable opposition at Westminster has shown that the SNP landslide was clearly the best thing to have happened in the otherwise depressing 2015 Westminster election.

It’s no wonder that so many SNP supporters have a problem accepting their leadership’s willingness to embrace it.

However, there is a huge deficit in how radical the SNP is perceived to be and what its policies actually are. There is a lack of any truly redistributive economic policies and it remains broadly pro-business and pro-monarchy. The new membership are clearly much more anti-establishment than both the leadership and the majority of the more traditional SNP support.

No newspaper owned by Murdoch would endorse anything truly radical and no truly radical party would seek endorsement from Murdoch.

In Hugh Kerr’s resignation letter he also states: “I am also concerned that the SNP is becoming a top down centralist control freak party which doesn’t brook dissent. We saw this at recent conferences where motions were systematically excluded or changed to suit the leadership, this way lies decline and despair.

“Success will happen this week and didn’t need the endorsement of the Sun but seeking power without principles is the way to defeat.”

The Sun is latching onto the SNP due to its popularity, not vice versa and the intimacy with Murdoch media will lose the party more support than it gains.

The latter point highlights perhaps one of the most baffling, least understandable aspects of the saga: that the SNP doesn’t need the Sun. The Sun is latching onto the SNP due to its popularity, not vice versa and the intimacy with Murdoch media will lose the party more support than it gains.

This has already been my experience with many responding that they will either no longer vote SNP at all or at least will not give them their second vote. It’s just poor judgement and poor politics. As borne out by the fact that not even the staunchest SNP supporter has actually launched an enthusiastic argument in favour of Sturgeon posing with the Sun. Denial rather than defence has been the sole reaction.

In courting and accepting the endorsement of the Scottish Sun, the SNP risks falling into the same trap as Tony Blair and Gordon Brown, used as a populist vehicle for the Murdoch press during the days of wine and roses then dumped unceremoniously when the hangover strikes and the flowers wilt.