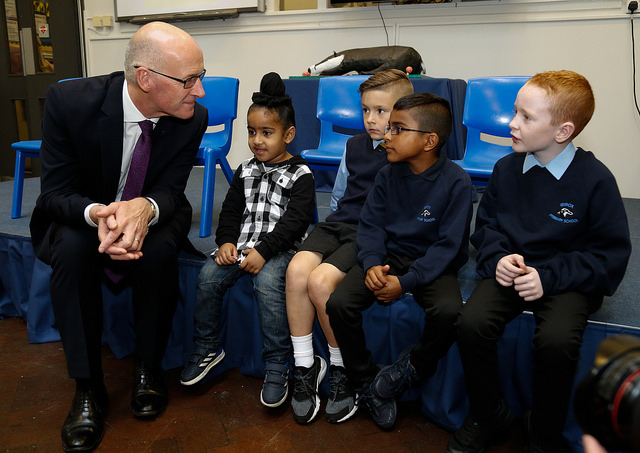 The call from the Scottish Children’s Services Coalition (SCSC), which campaigns to improve services for vulnerable children and young people, comes as the latest Scottish Government statistics publication showed that despite an increasing number of those identified with ASN, rising from 118,034 in 2012 to 199,065 in 2018 (28.7 per cent of the pupil population), an increase in numbers of 68.7 per cent, the number of those with a CSP has decreased from 3,448 to 1,986, a drop from 2.9 per cent to 1.0 per cent of those with ASN.

A CSP is a legal document requiring services such as education, health and social work to work together to give a child or young person the support they need.

While those with ASN are two times as likely to come from the most deprived neighbourhoods as the least deprived, poorest areas are half as likely the wealthiest areas to have ASN children with a CSP.

SCSC have said this is evidence that those from deprived communities who are entitled to a CSP are not receiving the legal support they are entitled to.

In calling for the urgent review, Lynn Bell from Love Learning Scotland, a member of the SCSC, commented: “It is clearly of some concern that we are experiencing a decline in the use of CSPs, which is to support those with the most complex needs.

“The disparity in those with a CSP between those in the least and most deprived areas is also worrying, as if we are to close the educational gap, it is key that we target the resourcing to achieve to those in the most deprived communities.

“We are also concerned about the disparities that exist between local authorities on such support, which clearly raises concerns about how such a policy is being implemented and a lack of standardisation of who is identified as having ASN and who gets a CSP.

“It is vital that the Scottish Government urgently undertake a review of how CSPs are being implemented by local authorities.”

The SCSC have raised concerns that the drop in the number of CSPs is due to the fact that authorities are more reluctant to provide a CSP than previously. Local authorities appear to have changed practise, according to SCSC, now not providing CSP’s unless parents request them, with Local Government facing significant cuts in recent years.

At First Minister’s Questions last week, Scottish Greens co-convenor Patrick Harvie highlighted the story of Ryan, a five-year-old with autism, who is unable to use the toilet himself and whose parents are now having to attend school twice daily to change their son after being told that his specialist support was being immediately slashed from two hours per day to just two and a half hours per week.

The intervention came as the Scottish Government, which proposed its draft budget for 2019/20 last month, continues to seek a budget partner to pass its Budget, with the Scottish Greens demanding local government tax reform as the price of their support.

Harvie said: “Tales like Ryan’s are horrendous, but by no means unique. The reality is that school life is getting worse for thousands of our most vulnerable children because of the lack of specialist support they need due to council budget cuts.

“Figures revealed by Green MSPs lay bare the crisis for young people with additional needs, their parents and teachers – demand is soaring, specialist teacher and support staff numbers are falling, and just one in every hundred ASN pupils gets the tailored support they need to thrive in mainstream schools.

“And as if the current crisis wasn’t enough, councils are now being forced to consider even more savage cuts to additional support needs provision because of the multi-million pound hole they have to plug in local budgets. Derek Mackay has admitted that councils will have to make ‘efficiencies’ – but COSLA made clear this week that “councils have done all they can to make efficiencies… the core is simply crumbling”.

Harvie continued: “The cold hard reality is that if Parliament passes the budget in its current form, cuts to jobs and front-line services for the most vulnerable people will be inevitable.

“Time’s running out for the Government if they want Green votes to pass their budget. Councils need new powers to make them less dependent on central government funding, but in the meantime they also need the funds that are necessary this year to protect vital support for pupils like Ryan.”

Council umbrella body Cosla has claimed that the Scottish Government’s Local Government funding plans, which were presented as a slight increase to council budgets over the next year, are in practise a £237 million cut.