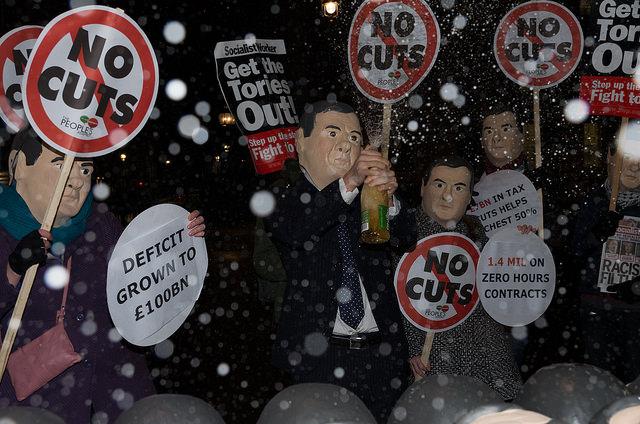 A summary of the report concludes that rather than reimagining the volatile structure of our economy or addressing our deep rooted economic issues, the 2015 budget was used to legitimise continuing on the same path that led to the financial crisis:

“George Osborne’s fifth budget revealed an economic recovery built on debt. The government’s own forecasters, the Office for Budget Responsibility (OBR), predict household debt will rise even higher than before the crash, fuelling an unsustainable, debt-led recovery.

The Chancellor has added more than PS517bn to government debt, more borrowing than every Labour government in history added together, and has missed his own target on deficit reduction.

This is the direct result of austerity-driven falling earnings bringing down tax receipts.

The headline increase in the personal tax allowance will do little for the 5m lowest paid workers who are already below it. Only a quarter of the PS2bn cost of the measure will go to the poorest 50% of households. The Treasury’s own analysis shows, once again, the disproportionate impact on low earners, with the poorest 30% worse off due to the combination of tax and benefit changes since 2010.

This was reiterated by the Institute for Fiscal Studies (IFS) in its own post-Budget briefing, stating that “the poorest have seen the biggest proportionate losses” from the tax and benefit changes introduced by the coalition. It also predicted that the richest would gain the most from the personal savings allowance changes in the Chancellor’s statement.

This is in a context in which the UK is becoming a more unequal society with higher levels of debt than ever before.

Household savings has already fallen back to levels last seen in 2007, while company investment fell in the last half of last year.

Whilst the number of jobs in the South of England is up 10% since 2010, the rest of the country has barely returned to the levels of employment seen in 2010. And for all the chancellor’s talk of “Northern Powerhouses”, his colossal cuts to investment, made in early 2010, have left spending on vital infrastructure down PS15bn from before he entered office.

Similarly, whilst Osborne claimed living standards have risen for most people since 2010, this is only if projections for rising wages are included for the rest of this year. As things stand, in March 2015, it is safe to say that most people are worse off than they were before he arrived in office. (The projections, meanwhile, are probably too optimistic. Currently nearly half of employers surveyed say they have no plans to raise wages at all this year.)

The budget also favored corporate interests over climate, with a PS1.3bn tax cut for North Sea oil operators, including some of the largest corporations on the planet, further undermines the Prime Minister’s boast of “the greenest government ever”.

The UK has always undertaxed the immense natural resource of the North Sea, effectively squandering billions to boost company profits. If we had applied the same tax rate as successful producer Norway operates, an extra PS118bn would have been raised in taxes over the last decade.

This is money that could have been invested in building a future-proofed low carbon economy. At a time when we should be looking to cut carbon emissions, the Chancellor has given in to oil industry blackmail.

Instead of following the same path that led to the last financial crash, the Budget could have been used to seriously address these issues. There are a number of alternative measures that would see moves towards a fairer and more sustainable economy, including:

* Ending austerity. The reduction in the coalition’s cuts target is welcome, but more could be done. End austerity and use government spending to sustain public services and deliver good quality jobs across the country.

* Higher wages. Raising the national minimum wage to the Living Wage standard would lift 4.6m out of poverty wages and, thanks to the boost to their spending, create 30,000 extra jobs.

* Local banking. Publicly owned banks like RBS should be broken up and turned into responsive, publicly accountable local banks. We estimate this could deliver PS30bn extra investment where it is most needed.”

Office for Budget Responsibility (OBR): economic forecasting unit, set up by George Osborne in June 2010. Aims to provide “independent” assessments of the economy for use in government’s own planning. Government-funded, uses mainstream forecasting methods, but has established a degree of independence under its second director, Robert Chote.

Keep up to date with the policy news from NEF here: http://www.neweconomics.org/