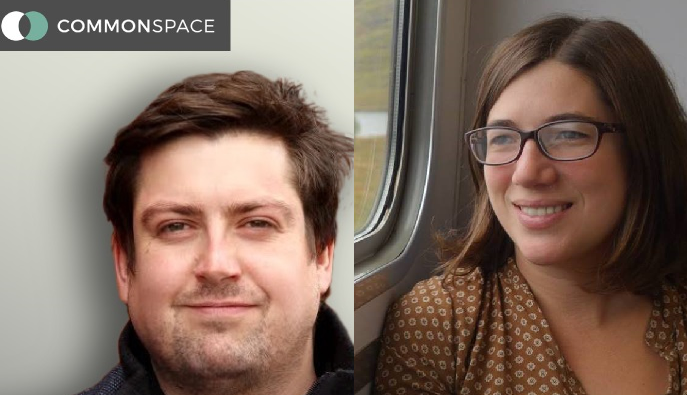 COMMONSPACE is pleased to announce two new journalists are joining our team.

David Jamieson, who previously worked at CommonSpace from July 2015-August 2017 and has contributed columns to the site in recent months on culture & ideology, is returning as a reporter, and with an additional role to lead a weekly podcast called Beyond the Noise, the first episode of which was published last Friday.

Jamieson will be replacing Caitlin Logan, a reporter with us since August 2017, who is taking up a new challenge (TBA).

Rhiannon J Davies will be taking up a new position as production & communications assistant at CommonSpace from 10 September. As a freelance journalist Rhiannon has written for various new media publications including CommonSpace, and was a writer and columnist in Turkey for many years. Rhiannon returned to the UK in 2016 to do a Masters at Glasgow University in international journalism, where she has learnt skills in video production, and spent five months on the audiovisual news desk at the European Parliament. You can visit her website here.

Commenting on the new appointments, CommonSpace editor Ben Wray said: “We are delighted to welcome Rhiannon to the team and David back to the team. They both bring great skills which can help the development of the site, as we go through a period of change where we will be introducing regular audio-visual content into what we do. We think this is going to be something that our existing readership is excited by, but which also helps us attract new readers and viewers to CommonSpace.

“We are very sorry to lose Caitlin from the team who has been a fanatastic reporter in her 12 months here. Later this week we will be publishing a CommonSpace special investigation which she has lead, and which will showcase what an asset she has been to the site – so watch this space! We wish her all the best for the future.”