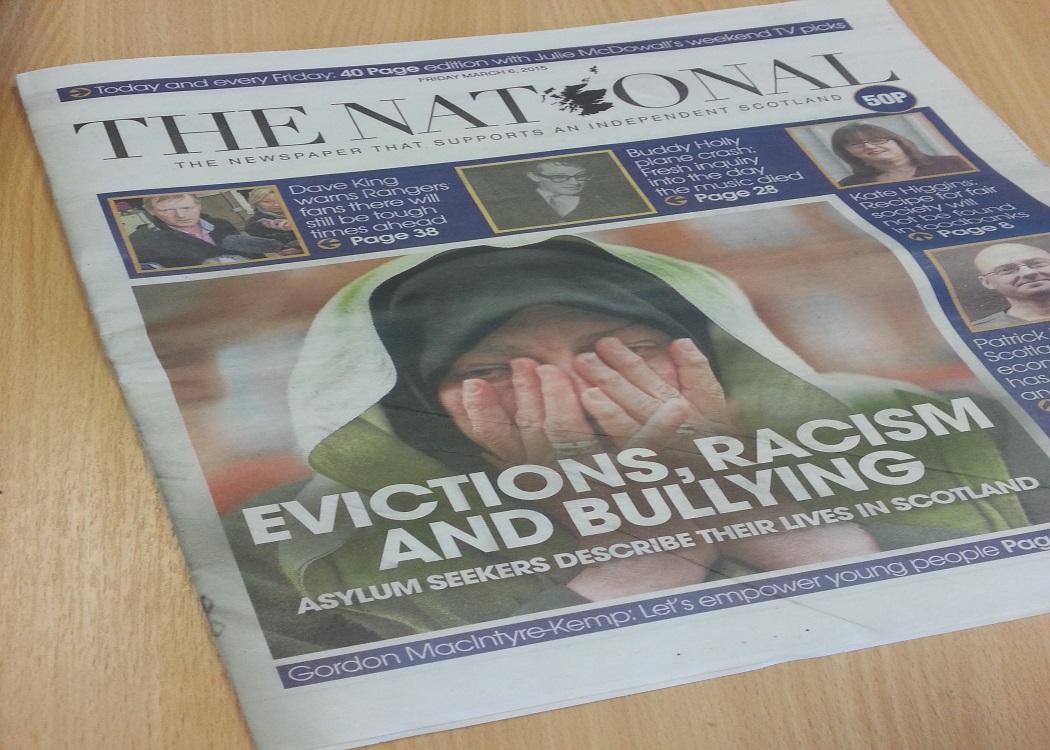 CommonSpace editor Angela Haggerty explains how the news service is already changing the narrative, but asks whether the readers of this emerging media realise how important their part in the new model is

ONE WEEK AGO, a CommonSpace investigation graced the front page of The National newspaper.

A story by reporter Liam O’Hare into deeply concerning mistreatment of asylum seekers in Scotland (click here to read) was splashed across not just the front page, but the second and third pages of the paper.

Three pages in a national newspaper giving a voice to those people who are rarely heard. This is exactly what CommonSpace was set up to do.

Liam’s article was not the first of ours to be picked up by a national outlet. Within only six weeks of CommonSpace, BBC Scotland picked up a story about the University of Glasgow’s arms trade investments (click here); the Independent credited CommonSpace for breaking the story of the head of Transport for London’s attendance at fancy clubs excluding the presence of women (click here); and The Herald and STV picked up our story about schoolchildren in North Lanarkshire being given homework labelling Palestinians as terrorists (click here).

Scotland has a genuine new media movement which is challenging the mainstream certainties and breathing life into UK politics.

Some of our most popular content has been coverage of issues like TTIP, land reform and fracking. We approach these dry subjects with different styles and formats in a bid to make them more digestible – and it’s working.

In February we launched our first editorial campaign (click here for more), in support of the community bid to take over the Castle Toward estate in Argyll & Bute, which was facing controversial opposition from the council.

During a week of dedicated content, we not only raised the profile of the buy-out bid, but we delved even further into questionable practice by the local council and exposed serious allegations of bullying and intimidation at a senior level (click here to read).

Traffic on CommonSpace has steadily increased since launch, and we are averaging out at around 20,000 unique users every week already.

We’re also upfront about how we get our content; on the source bar of each article we tell readers whether a story came from our journalists’ own sources or whether it came from a press release. Our duty is to inform readers and give them all of the information they need to make up their own minds.

CommonSpace can’t be compromised by big corporations because we don’t take their money.

We can only expose the PR culture which has infiltrated politics and media in Scotland and the UK by offering transparency.

CommonSpace has published literally hundreds of articles since launch. We are a small team of people – four in total – and CommonSpace reporters Ben Wray, Liam O’Hare and Michael Gray work incredibly hard.

If they could sleep in our office, I have no doubt that they would.

The passion and commitment they have to producing good journalism in the interests of the people of Scotland, not corporations or PR agencies, is inspiring.

Scotland has a genuine new media movement which is challenging the mainstream certainties and breathing life into UK politics.

But we do this without any advertising revenue. CommonSpace can’t be compromised by big corporations because we don’t take their money.

Our funding instead comes through the Common Weal think-tank, although we remain editorially independent.

It’s our job as journalists to ensure that the ignored voices in society can find a platform.

Our commitment to our readers is to strive to produce well-sourced, accurate journalism which covers subjects too often ignored in mainstream media. It’s our job as journalists to ensure that the ignored voices in society can find a platform.

And so we need your help. In exchange for everything we do, we ask you to give us a regular monthly contribution. Our commitment is to our readers, not advertisers, and in turn we really need your support to carry on producing the kind of journalism Scotland so badly needs.

If you can help, visit allofusfirst.org/donate (click here) to set up your contribution – even just PS5 a month can make a big difference to us.

CommonSpace is part of the Common Weal, and the latest video (below) from the think-tank gives a flavour of the various projects and ideas that Common Weal supporters fund as well as CommonSpace.

Thanks for all your support.