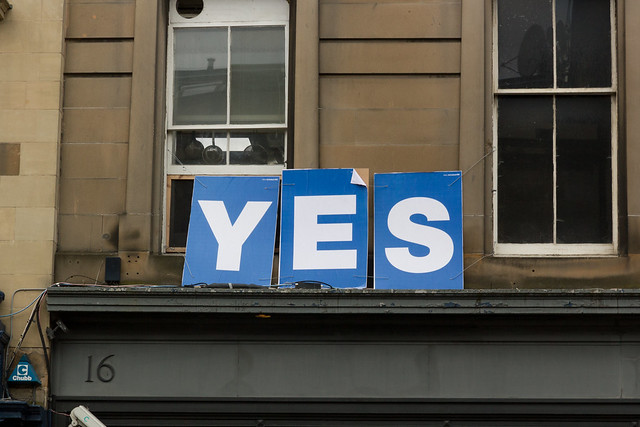 Professor John Curtice comments: “It can no longer be presumed that Scotland would vote ‘no’ again in an independence ballot”

A MAJORITY of Scottish voters now back a second independence referendum in the near future, while support for the SNP continues to rise as the Scottish Conservatives face a near-wipeout in the event of a snap General Election.

The YouGov poll, commissioned by the Times Scotland, reveals that a total of 45 per cent of respondents support another vote on independence within the next five years, with 44 per cent opposed and 11 per cent unsure.

The poll also shows that support for independence is holding steady with 49 per cent in favour, echoing a similar result released in April this year.

In Westminster voting intentions, the poll suggests that the SNP could win 51 of 59 seats, with the Tories current 13 MPs reduced to three and Labour’s representation taken down to one.

48 per cent believe that Boris Johnson’s tenure as prime minister has made Scottish independence more likely, while 57 per cent of those who voted Remain in the EU referendum now say they would vote for independence.

“Today’s poll poses another difficulty for unionists. Hitherto they have felt able to claim that most voters in Scotland do not want another independence referendum. That claim is now in doubt.” Professor John Curtice

In terms of Holyrood voting intentions, the SNP enjoys a comfortable advantage over all other parties, with a 45 per cent level of support – 22 points ahead of the Scottish Conservatives. The opinion poll also predicts that the Scottish Greens will increase their representation to 10 MSPs, making a further pro-independence majority across the Scottish parliament more likely.

Commenting on these findings, the political scientist and pollster Professor John Curtice wrote in the Times: “It can no longer be presumed that Scotland would vote “no” again in an independence ballot. Throughout 2017 and 2018 YouGov consistently reported that “no” votes outnumbered “yes”. On average, once “don’t knows” were left to one side, just 44 per cent said they would vote “yes”, little different from the result in 2014.

“But in April YouGov reported Yes support had risen to 49 per cent. It was perhaps possible that was simply random variability. That can now be dismissed. Our new poll again puts support for independence at 49 per cent.

“But perhaps just as importantly the evidence in April’s poll that the increase in support for independence was being occasioned by the Brexit debate is confirmed.”

Curtice continues: “Today’s poll poses another difficulty for unionists. Hitherto they have felt able to claim that most voters in Scotland do not want another independence referendum. That claim is now in doubt.”

The poll’s results are likely to bolster the efforts of First Minister Nicola Sturgeon, who confirmed yesterday [4 September] during her speech on the 2019-20 Programme for Government that she would seek the transfer of power necessary to declare a second independence referendum. Scotland’s opposition to Brexit and right to choose independence would, she added, be “at the very heart” of any General Election campaign.

The polling was welcomed by SNP Depute Leader Keith Brown, who said: “This is a brilliant poll, which underlines the strength of opposition to Brexit in Scotland and the increasing support for Scotland having the right to choose our own future amidst the Westminster chaos.

“With the prospect of an election imminent, the SNP never take a single vote for granted. We will continue to work hard for people across every part of Scotland – doing everything we can to stop Brexit and give the people of Scotland a choice on their future.

“Scotland has been completely ignored throughout the Brexit process. The people of Scotland deserve the right to choose our own future – instead of having it dictated to us by Westminster.”

Elsewhere within the SNP, MEP Alyn Smith – who this week led a cross-party group of MEPs to sign “the Brussels Declaration”, which states that the “the proroguing, or shutting down the UK Parliament in order to limit the scrutiny of the implications of a potential no deal Brexit is completely unacceptable” – also noted the influence of Brexit upon support for a second referendum and the SNP.

Smith said: “The SNP position is clear – Scotland voted for Europe and we want to remain therefore we will work with colleagues across the parties to ensure the UK and Scotland does not crash out of the EU with a disastrous no deal.

“It is no wonder that support for independence is growing and a majority of people now want a fresh referendum. It is clearer than ever, that the only way to properly protect Scotland’s interests is by becoming an independent member state of the European Union.”

“With only six we have been agenda-setting and pushed the Scottish Government to be bolder. Ten would give us a platform to push for a truly transformative Scottish Green New Deal and build a future for all.”

However, the unionist campaign group Scotland in Union took a different view on the poll’s implications, highlighting the slim majority that remain opposed to independence.