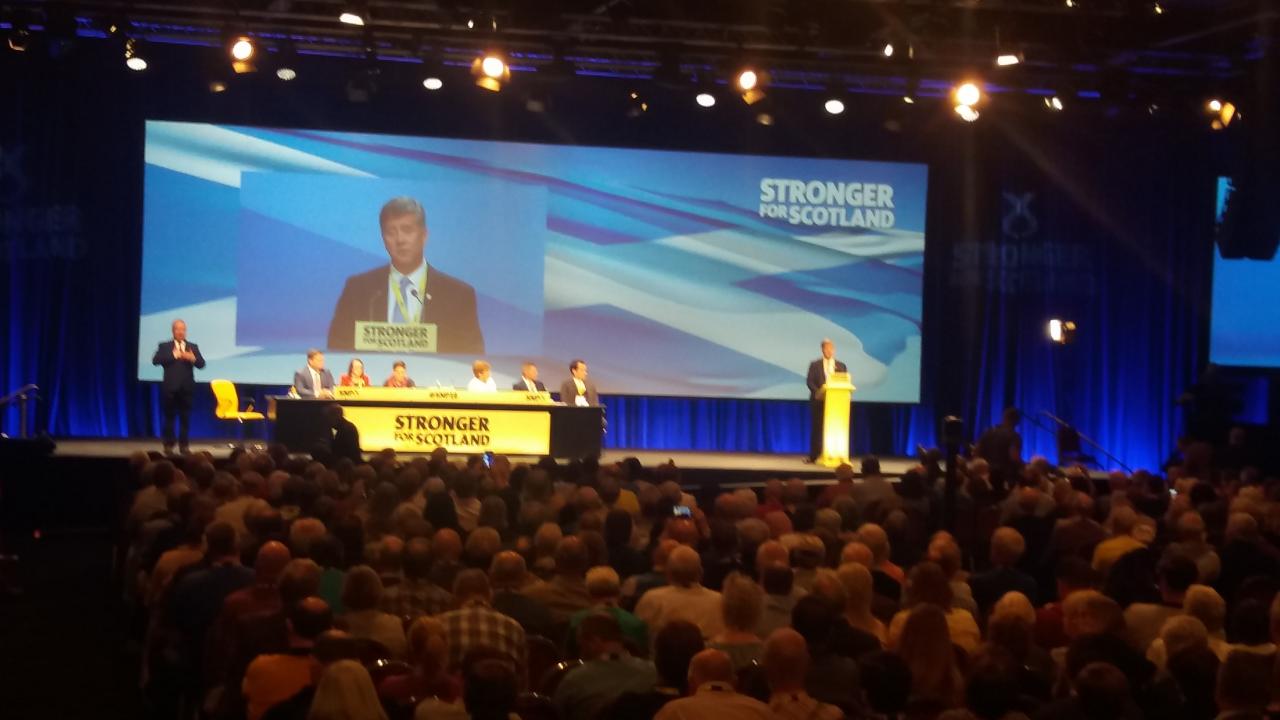 Brown will chair three national assemblies over the summer, pledging to reach out to “the wider Yes family”

KEITH BROWN has begun his tenure as the new SNP depute leader by promising to reach out to the party grassroots and the wider independence movement in a nationwide debate spurred by the SNP’s recently published Growth Commission report.

At the opening session of the SNP’s party conference in Aberdeen this morning [8 June], it was announced that the Cabinet Secretary for the Economy, Jobs and Fair Work had defeated his two opponents in the leadership election, party activist Julie Hepburn and councillor Christopher McEleny.

Addressing the conference following the announcement of his victory, Brown welcomed several recent polls as encouraging for both the SNP and the independence movement.

The latest findings from the National Centre for Social Research indicate that voters are overcoming fears that independence may harm Scotland’s economy, with more Scots believing that leaving the UK would improve the Scottish economy rather than making it worse.

A new Social Attitudes Survey has also shown that independence is now the most popular constitutional option in Scotland, while a poll published in the Times newspaper suggests voting intentions for the SNP have risen at the expense of Labour.

Brown told the conference: “I believe I am taking on this post with the party in extremely good heart. With the polls showing us in a leading position at Holyrood and at Westminster, and that’s after 11 years in office.”

Congratulations to @theSNP new deputy leader @KeithBrownSNP – he will be brilliant. And well done to @juliehepburnsnp and @SNPChris for making it a great contest and showing the depth of talent in our party. #SNP18

Brown paid tribute to the achievements of the All Under One Banner marches, which have seen the independence movement turn out in force on the streets of Scotland: “You may have noticed friends, outside this hall things are beginning to start once again.

“Tens of thousands of people are marching in our towns and our cities, and the discussion on Scotland’s future is taking place up and down the country.

“We’ve all seen a myriad of projects and activities, big and small, bubbling to the surface, as individuals and groups come together to prepare for what is undoubtedly ahead. Yes groups are forming, organising and connecting; people with ideas are making them happen.”

On the SNP’s Growth Commission report, Brown said: “With the publication of the Sustainable Growth Commission report, we have also opened up a new debate on how Scotland can move beyond the damage and the despair of Brexit to a new dialogue of hope and ambition. And that report shows that independent countries can be successful – more successful, in many cases, than their larger neighbours.”

While defending the Growth Commission as an inherently anti-austerity document, Brown devoted a significant portion of his conference speech to outlining the ways in which he intends to ensure that all perspectives within the party and the independence movement are heard.

Reiterating his commitment during this depute leadership campaign to address the concerns of the party grassroots, Brown pledged to chair three such assemblies over the summer to discuss the Growth Commission’s findings: “I’m looking forward to chairing those discussions of what promises to be an exciting and invigorating debate, and it will be a debate.

“That debate is not just for us – of course. The national assemblies are about the SNP – but we also have a responsibility to set out a credible plan for independence, and to listen to others, and to take on their ideas.

“So I’ll also engage in a wider discussion, inviting trade unions and business groups, as well as people from across civic Scotland, and of course the wider Yes family to share their views with us.

“And whatever we decide – and it will be our members who decide – our position will reject austerity. That’s what this party has always done, and that’s what the Growth Commission also says we will always do.”