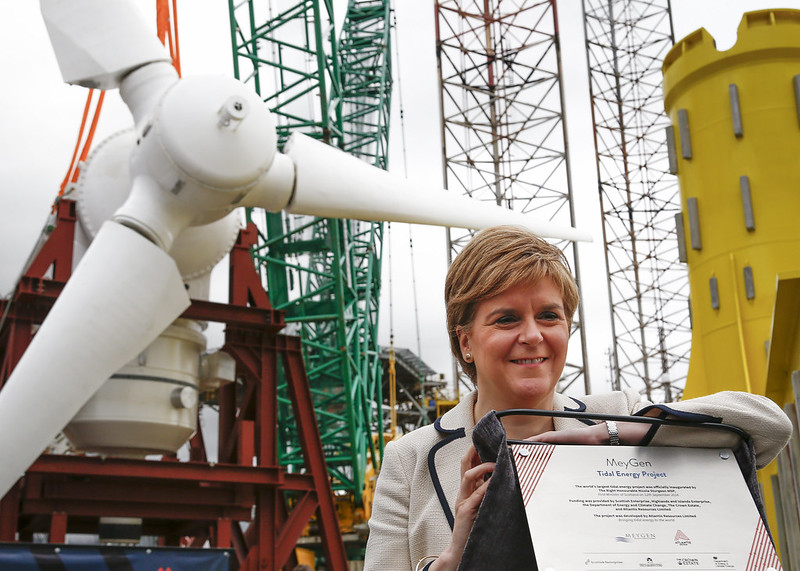 PLANS unveiled by the SNP for a ‘Green Energy Deal’ aimed at bringing about a transformational shift in the UK energy strategy have drawn criticism from environmental campaigners and the Scottish Greens.

Speaking ahead of a General Election campaign visit in Edinburgh today, First Minister Nicola Sturgeon called on the UK Government to “get its act together” on tackling long-term energy challenges and criticised Westminster for “years obsessing over nuclear power and a complete lack of vision and ambition over the energy technologies of the future.”

Backing what the SNP has described as its ‘Green Energy Deal’, the first minister will seek to apply pressure on the UK Government to increase support for the renewables industry through a package of measures including:

Sturgeon commented: “At this election, Scotland can elect a strong team of SNP MPs to demand the radical action needed to tackle the climate emergency and secure the future of our green energy industry.

“Scotland is already a world-leader on tackling the climate crisis and delivering green energy. By contrast, Westminster has wasted years obsessing over nuclear power and a complete lack of vision and ambition over the energy technologies of the future.

“Put bluntly, there is no more time to waste – it’s time for Westminster to get its act together.

“It’s time for the UK Government to match the SNP’s ambition – with a Green Energy Deal which will bring about a transformational shift toward the energy schemes of the future.

“Climate change is without doubt the single biggest challenge we face. In Scotland, the SNP has declared a climate emergency and introduced the toughest legal targets in the world to ensure net zero emissions by 2045. The next UK Government must stop falling behind and follow Scotland’s lead with radical action to secure our future.”

However, the measures proposed by the Green Energy Deal drew criticism for their lack of radicalism from environmental campaign group Friends of the Earth Scotland, who warned that more transformative action will be necessary to achieve a just transition from fossil fuel dependency.

Friends of the Earth Scotland director Dr Richard Dixon said: “The proposals in this Green Energy Deal, such as providing greater long term certainty for investment in green energy projects and including onshore wind in the UK’s industrial strategy, would be welcome support for the renewable energy industry but they don’t go nearly far enough.

“The climate emergency demands transformative policies to deliver a Just Transition to a fossil free economy. The proposals put forward focus on increasing private sector investment but we must see a more interventionist approach, using all levers at Parliament’s disposal to support the transition.

“Many of the proposals in the SNP’s Green Energy Deal announced today were included in their last election manifesto in 2017. Since then, the public demand for action to cut emissions has grown even louder – and we hope to see all upcoming manifestos reflect this, offering significant developments to the 2017 offerings.

“This election is critical for the climate emergency. This must mean an immediate end to new exploration for oil and gas, redirecting the vast fossil fuel subsidies into clean energy and putting forward a plan to manage the phase-out of extraction while protecting and enhancing the lives of workers and communities.

“We need all political parties across the UK to get serious about shifting away from oil and gas to clean energy by putting forward comprehensive plans for managing the energy transition at a pace to tackle the climate crisis while delivering a Just Transition.”

Also responding to the Sturgeon’s comments, Scottish Green co-leader Patrick Harvie MSP offered further criticism, saying: “If the First Minister’s world leading rhetoric was matched by her government’s actions Scotland would be well on its way to playing our part in tackling the climate emergency.

“Unfortunately, the SNP, just like Johnson’s Tories, want to extract every last drop of oil from the North Sea. The SNP cannot claim the moral high ground, only a month after letting BP and Heathrow airport sponsor their party conference.

Common Weal has billed the proposal as the first comprehensive and fully costed Green New Deal in the world, and endorses policies such as a National Housing Company to increase the thermal efficiency of Scotland’s homes, a District Heating Scheme powered by large-scale renewable heat generation, the replacement of all non-renewable electricity generation, the radical reform and diversification of land ownership and the reforestation of 50 per cent of Scotland.

Earlier this week, the New Economics Foundation also called on the next UK Government to commit 2 per cent of GDP to a Green New Deal aimed at decarbonising at pace whilst lifting living stands, with half of those resources devolved to regional authorities.

Commenting, NEF chief executive Miatta Fahnbulleh said: “The UK is in the grip of three interlinked crises: a crisis of living standards, an ecological crisis and a democratic crisis. But at the moment when we should be tackling these crises, we are locked in a seemingly unending battle over Brexit. We need a transformative political programme that mobilises people and maps a new role for the state.”