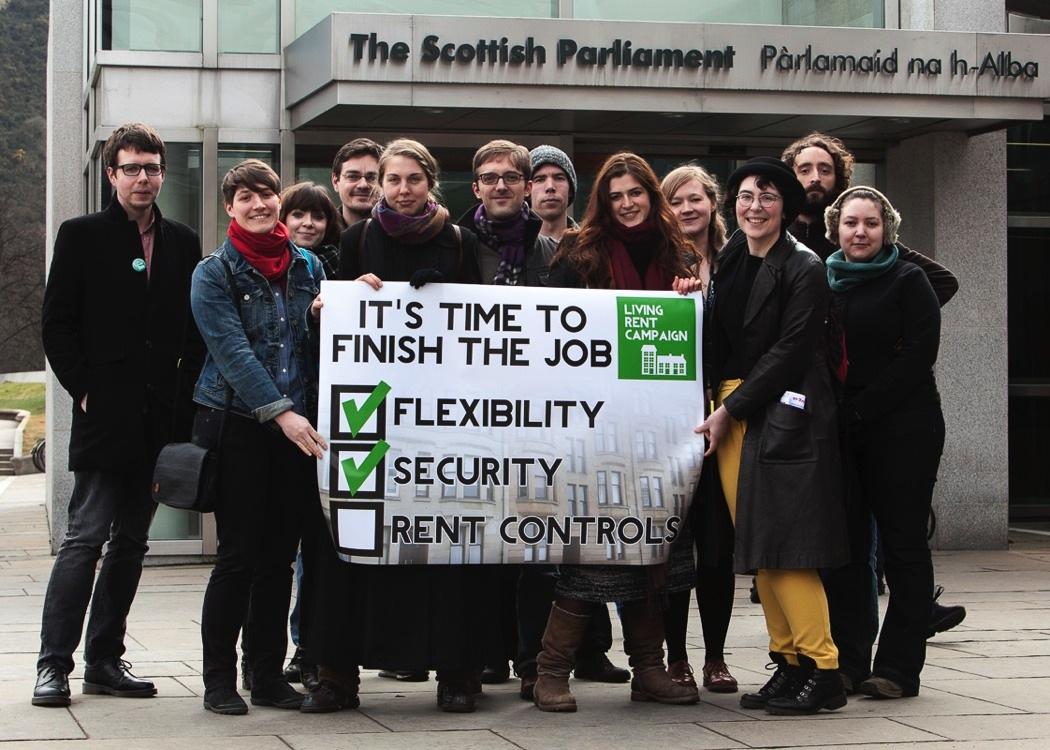 THE SNP’S new conference commitment to rent controls would have a substantial impact in reducing education inequalities, according to campaign group Living Rent.

With more young students burdened with sky-high rents than ever before, campaigners claim that a new system that reduces rent costs would improve access to higher education for the poorest pupils. They gathered outside the Scottish Parliament calling for a future government to “finish the job” with full rent controls.

“If the Scottish Government is serious about creating a better, fairer country for the next generations, it will make proper rent controls its top priority after the election in May.” Lewis Macleod, student

Lewis Macleod, Aberdeen student and Living Rent activist, called on the SNP to deliver its new conference policy in the next parliament: “Some people are under the impression that living in poor quality, expensive rental flats is just a harmless rite of passage students have to endure for a few years until they ‘graduate’ to home ownership.

“In reality, the high cost of renting is keeping many people from poorer backgrounds from studying, and for an increasing number of young folk, renting will be the only option available even after they graduate.

“It’s great to see Scotland’s political parties finally recognise the damage high rent prices are doing to our young people, with the SNP conference last week voting in favour of nationwide rent controls to tackle poor conditions and cost for private tenants. If the Scottish Government is serious about creating a better, fairer country for the next generations, it will make proper rent controls its top priority after the election in May.”

Students Ashley Cameron and Laureen Gilmour spoke of their struggle to afford further education. Both mentioned high rents as a significant factor in making education difficult to afford.

Following a fringe event on education access at the party’s conference, Scottish Government minister for learning Alasdair Allan said he was interested in how rent controls worked in other European countries as examples to inform future party policy.

Another SNP advisor told CommonSpace that the motion in favour of a national rent controls system would have to be “dealt with” during the next parliament.

Students Ashley Cameron and Laureen Gilmour spoke of their struggle to afford further education. Both mentioned high rents as a significant factor in making education difficult to afford.

The government aims to end wealth inequalities in education access by 2030 through a commissioner for fair access, new admissions thresholds for poorer students, and full bursaries for students with care experience.

However, the report did not confront sky-high rents for students in both educational accommodation and the private rented sector.

A Scottish Government spokesperson told CommonSpace that “students in the mainstream private rented sector should be treated the same as any other tenant”.

But the current system means that young people in full time education often have students loans – if they qualify for them – eaten up by high rent costs, while lacking the opportunity to work available to other tenants.

This year students will also pay out tens of millions of pounds in university regulated rent costs.

The University of Edinburgh advertises its monthly halls costs as PS390-PS685 per month. Catered accommodation costs are much higher, at a cost of up to PS1,100 per month.

At the University of Glasgow monthly costs vary between PS384-PS624 per month. Catered accommodation costs up to PS754 per month. According to student president Liam King, rents have risen for 14 years in a row at the campus’ main accommodation centre.

In Aberdeen, which has suffered from substantial rent hikes, university halls cost PS429-PS615 per month for this year.

Grahame Smith, general secretary of the Scottish Trades Union Congress (STUC), called for greater action on education inequalities following the new access report: “It is a continuing scandal within our education system that the wealth of your parents determines how likely you are to go to university.

When asked how the SNP plans to implement the conference motion and the potential benefits for education access, a spokesperson focused on the current Private Housing (Tenancies) Bill.

“SNP Conference last weekend passed a motion to tackle high rent costs and we have always been concerned over tenants facing rent hikes which can make the private rented sector unaffordable for many – which is exactly why the SNP in government has introduced rent pressure zones into this tenancies bill,” the spokesperson told CommonSpace.

“Any further action cannot be taken without the normal process of consultation with stakeholders and parliamentary scrutiny and debate – and would therefore be an issue for a future Scottish Parliament session.”