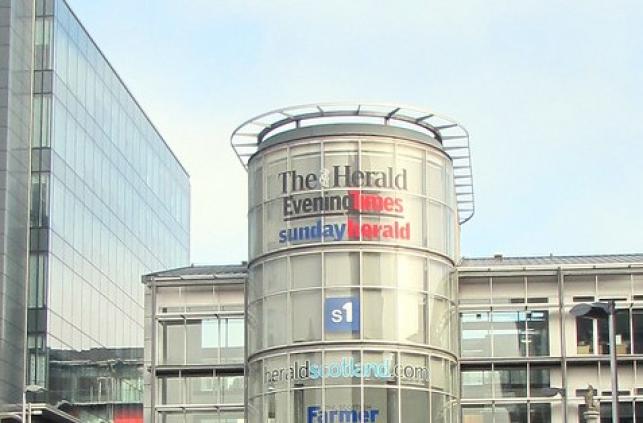 NEWSQUEST, the Glasgow-based publisher of the Herald, the National and its sister papers, has lifted the threat of compulsory redundancies, following the overwhelming vote in favour of strike action from members of the National Union of Journalists.

In response to this week’s confirmation that nine members of Newsquest staff had opted for voluntary redundancy following a plea from Newsquest Scotland editor-in-chief Donald Martin, 86.7 per cent of voting NUJ members at Newsquest threw their support behind industrial action.

The NUJ confirmed today that a well-attended meeting of Newsquest union members – representing the Herald, the Herald of Sunday, the Glasgow Times (formerly the Evening Times), the National and the Sunday National – had voted unanimously to withdraw the threat of such action.

The union has also raised the issue of bullying, but said that the company had dealt with this issue “promptly”. It has also been reported that six posts will be filled externally.

Commenting on these latest developments, NUJ Scotland national organiser John Toner said: “Our members are heartened that their employer has listened and that no member of staff will be forced to leave.

“We are also appreciative of the speed by which the bullying issue was resolved and of the company’s assurance that bullying will not be tolerated. The relief among our members was palpable.

“Management has agreed to meet the union’s reps regularly, and to have routine staff meetings to deal with the problems expressed through our recent stress survey. Any management restructure will throw up issues for our members, and we look forward to working more closely with Newsquest management to create an acceptable working environment.”

Also commenting, a Newsquest Scotland spokesperson said: “From the outset we have been actively seeking to avoid compulsory redundancies, and following ongoing constructive dialogue with both the union and staff, we have managed to achieve the savings required via voluntary redundancies.

This afternoon I asked the First Minister about the cuts to journalist jobs at Newsquest. We are in a bad place. @scotgp stands ready to take part in any discussions about the future of print media in Scotland & in solidarity with all journalists. pic.twitter.com/86cXWL64RZ

“We will continue to work positively together to ensure that we have a sustainable business model.”

Wightman asked First Minister Nicola Sturgeon: “The first minister will be aware of job cuts at Newsquest and that journalists there have voted for strike action. She’ll be aware that this is just the latest challenge for Scottish print media following a 44 per cent decline in circulation since 2006.

“I won’t comment too much on the vote for strike action – that’s for the workers there to decide. But I fully understand the sentiment.” First Minister Nicola Sturgeon

“Does she agree with me that a free press is a vital part of any democracy? Does she agree that journalists losing their jobs undermines the vital role that the media play in holding power to account, and does she agree that at a political level we need to we need to explore what can be done to restore and sustain a healthy, vibrant print media?”

Sturgeon replied: “Yes, I do agree that a free media is absolutely essential to the health of our democracy. I think it is always a matter of concern and regret when journalists lose their jobs and are made redundant.

“All of us feel the discomfort of media scrutiny from time to time, but is absolutely essential that we have journalists there to do that, to hold us to account, and to make sure that scrutiny on behalf of the public happens.

“I do think, looking at Newsquest in particular, some of the cuts that are happening there are deeply concerning. I won’t comment too much on the vote for strike action – that’s for the workers there to decide. But I fully understand the sentiment.

Sturgeon added: “Obviously, politicians have to always be careful about how we look to intervene, or anything that could be construed as interfering in the media, but I think all of us want to make sure we’re doing what we can to support not just a free and fair media, but a vibrant and successful media as well in Scotland and indeed in countries across the world.”