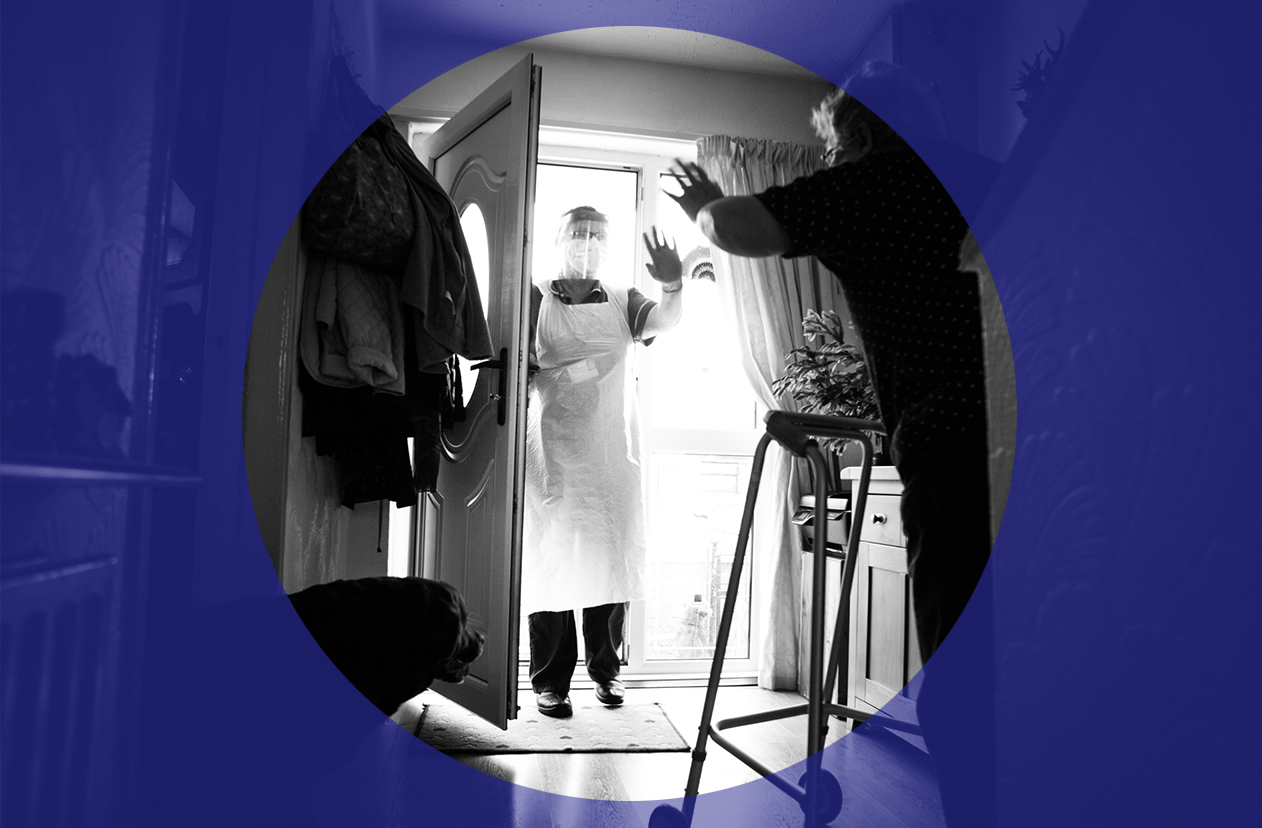 “If the Scottish Government were to decide to create a not for profit National Care Service under which the workforce was fairly paid and properly trained, domiciliary services would be the easiest to reform.”

ON 24 SEPTEMBER, to little fanfare until today, the Care Inspectorate published a report on how care services had been delivered to people living in their own homes during the pandemic.

While public focus over the last six months has rightly been on the care home disaster, around twice as many people receive what are known as home care and housing support services in their own homes. The impact of Covid-19 on those people and their carers is now becoming increasingly apparent. The publication of this report by the Care Inspectorate is, therefore, very welcome.

The report appears to have been commissioned by the health secretary Jeanne Freeman, and covers the period from March to August 2020 and all age groups. It has been produced in a remarkably short period of time. The speed of publication contrasts with Public Health Scotland’s recent announcement that its report on the role played by the discharge of infected people into care homes was being delayed another month. Instead of being forced to reveal information bit by bit, as has been happening with the care home sector, it is as if government has decided to try and pre-empt public criticism by getting there first.

None of this invalidates the report, which should be read by anyone with an interest in the impact Covid-19 has had on vulnerable people living at home and the people, paid and unpaid, who look after them.

The eight main findings include the following:

This rings true. Without extraordinary efforts from unpaid carers and the frontline staff who were still able to work, almost all of them women, services would probably have collapsed.

While the report states that the volume of home care and housing support services “only” reduced by 5-20 per cent during the crisis, it also refers to the closure of other services, such as day care and respite. Taken together, there appears to have been a drastic reduction in services.

The report is also sprinkled with insights into what really went on, which support the need for a public inquiry into the handling of the Covid crisis. For example, the report notes that considerable pressure was put on care at home services in the rush to empty hospitals in March and April, but after that there was a significant reduction in the number of new referrals (with families and friends presumably assuming responsibility for care).

The report is therefore generally a positive step forward – it puts on record what many will have previously suspected and provides a basis for future inquiry and planning. It presents, however, only part of the picture. It is based on surveys and interviews with senior managers in the health and social care partnerships (HSCPs), responsible for the delivery of care at home services and a sample of 692 of those services (out of over 1,800 in Scotland), of whom 305 responded. It therefore presents the viewpoint of managers, with all the biases that brings.

It also makes no attempt to explain which providers responded to the survey or consider how this might have affected the results. Most importantly, as it acknowledges, this does not include the views of people receiving services at home, or their carers. All of this indicates that the report, which is very upbeat in tone and reports on the positives of the pandemic before the negatives, arguably under-represents the extent of the crisis and its consequences.

Unfortunately, the only data contained in the report are the findings from the surveys of HSCPs and Providers. These are included in two useful appendices. Information collected by the Care Inspectorate during the crisis is completely missing; that includes the number of people who died from Covid-19 while receiving or providing domiciliary services and the number of staff reported off sick or isolating. Data provided by the HSCPs for the report, including information about the number of people whose services were stopped or reduced, whether they asked for this or not, is also omitted.

Without this data, the report lacks objectivity. Just as with care homes, unless outbreaks of Covid-19 are properly mapped, we will never understand why it affected some services and not others. Nor what now needs to be done to prevent more people dying needlessly or suffering the long-term consequences of the disease.

Five days after the Care Inspectorate released its report, the Alzheimers Society,  which has been actively researching the impact of Covid-19 unlike its Scottish counterpart, published its latest report.

Its findings flesh out what was skated over in the Care Inspectorate report:“Since lockdown on 23 March… family and friends have spent an extra 92 million hours caring for loved ones with dementia due to the double whammy of lockdown making dementia symptoms worse, and the chronically funded social care system leaving them nowhere else to turn”.

The Alzheimer Society found that that 41 per cent of people who had been in receipt of care at home services had had this stopped or reduced during lockdown, and that 45 per cent of carers felt they were being asked to contribute a greater level of care than they were able. Social care in England has been subject to even greater cuts than in Scotland, so the situation may be better here. But if so, that is all the more reason for the Care Inspectorate to publish the data it holds. As importantly, we urgently need to give a voice in Scotland to the experience of people who needed care during the crisis and their carers, whether paid or family and friends. A first step towards this has been made in the report published today by the Scottish Human Rights Commission.

A stated intention of the report was “to inform future planning for, and improvement in, these services”. Ten of the sixteen recommendations are primarily directed at HSCPs and another five at national and local partners. Only one, on the need to review how additional Covid-19 funding is accessed, mentions the Scottish Government. While references to resource issues are sprinkled throughout, the report carefully avoids making any recommendations for increased resources or service reform. As a consequence, its recommendations read like another example of the Scottish Government using regulatory authorities to discipline local government and health boards to do more with less. This is a sector in crisis and without tackling the resource issues, the recommendations can’t be implemented.

The fundamental issues in the care at home sector that need to be are illustrated by the announcement on 28 September that Mears Care (Scotland) Ltd, which operated 34 services registered with the Care Inspectorate and employs 1,000 staff, had been sold to Cera Care for £2.5 million. Neither the Scottish Government nor the Care Inspectorate made any comment on the sale.

While the Herald reported Mears Care Scotland Ltd had generated £0.6 million profit from £21.7 million turnover, its accounts to 31 December 2019 show profit of £1.5 million on turnover of £33.4 million. Given the £2.5 million price, the former appears more likely to be true. It is possible Mears transferred part of its Scottish business before selling off the care at home arm.

Unlike care homes, domiciliary care companies have few fixed assets. In Mears’ case, the accounts record fixed assets of £181,000 (leases on 12 offices and the associated equipment). A tiny amount. The value of these companies comes from what they can extract from fees for services, much of which is paid by local authorities. If Cera can continue to extract £0.5 million a year that would provide a handsome 20 per cent return on its investment.

Over the last ten years, local authorities have continued to outsource services and the proportion of home care hours provided by the private sector has increased from 50 to 70 per cent. At the same time, competitive procurement processes have kept fees low.  This has driven down the pay and conditions of the workforce.

One way providers have managed to do this with care at home service has been to stop paying workers for travel time between visits. In the case of Mears’ service for Edinburgh and Midlothian, for example, the most recent inspection report states “the service is currently not commissioned to include travel times between visits to support people. Some of the supported people we spoke with told us that staff were often rushed with the time restraints placed upon them.” Care at home staff have been left with the unpalatable choice of either working for even less than the minimum wage or cutting corners with the people they are trying to support.

The consequence of this has been very high turnover of staff. The same inspection report states: “the service has experienced a high staff turnover, which although not unusual within the care sector at this time, it has been having an impact on some people receiving care and support. Some people told us that they did not have a degree of consistency in terms of who supported them and this caused people a degree of frustration, not always knowing who was coming to visit them and whether they would have to explain to the support worker what support they required as the staff member did not always have the time to read people’s support plans.”

The extent of the problem is shown in Mears’ accounts where carer “churn” of 39.8 per cent was reported in 2019. That was down from a staggering 48 per cent the previous year. The miracle is that any quality care can be provided in these circumstances. The whole system depends, as it did during the first part of the Covid-19 crisis, on the goodwill of care staff, almost all women, and their willingness to be exploited for the benefit of others. For most, it does not take that long to decide enough is enough and vote with their feet. The labour shortages in the care sector are caused by the way staff are treated.

Mears appear to have decided that this situation was unsustainable and it was time to get out of the market. Cera, however, clearly believe profit can still be made by using technology more effectively. Initiatives include a link up with Uber, to reduce the costs of transporting staff from house to house, and a rapid recruitment platform. They have been helped with this by none other than Sir David Behan, former head of the Care Quality Commission, which regulated care in England, who has been chair of their advisory board. Sir David is also Chair of HC-One, the UK and Scotland’s largest care home provider, which managed to get the Care Inspectorate to withdraw their attempt to cancel the registration of Home Farm Care Home on Skye before selling it to Highland Health Board for £900,000.

With advice from Sir David, Cera – like Impact Healthcare – clearly don’t believe the Scottish Government is likely to do anything soon that might risk their investment.  They will also have been re-assured by the Care Inspectorate’s report and its good news story about managers across the sector working together.

Yet if the Scottish Government were to decide to create a not for profit National Care Service under which the workforce was fairly paid and properly trained, domiciliary services would be the easiest to reform.  People would flock to work with providers who paid them properly and unlike care homes, there are no assets that would need to be transferred. While paying for such a service would be more expensive, staff currently employed by Mears/Cera could be awarded an immediate £500 annual pay increase if we stopped the profit leakages. We should be depending on the goodwill of paid and unpaid carers, highlighted in the Care Inspectorate’s report, to support vulnerable people or get through a second wave of the pandemic.