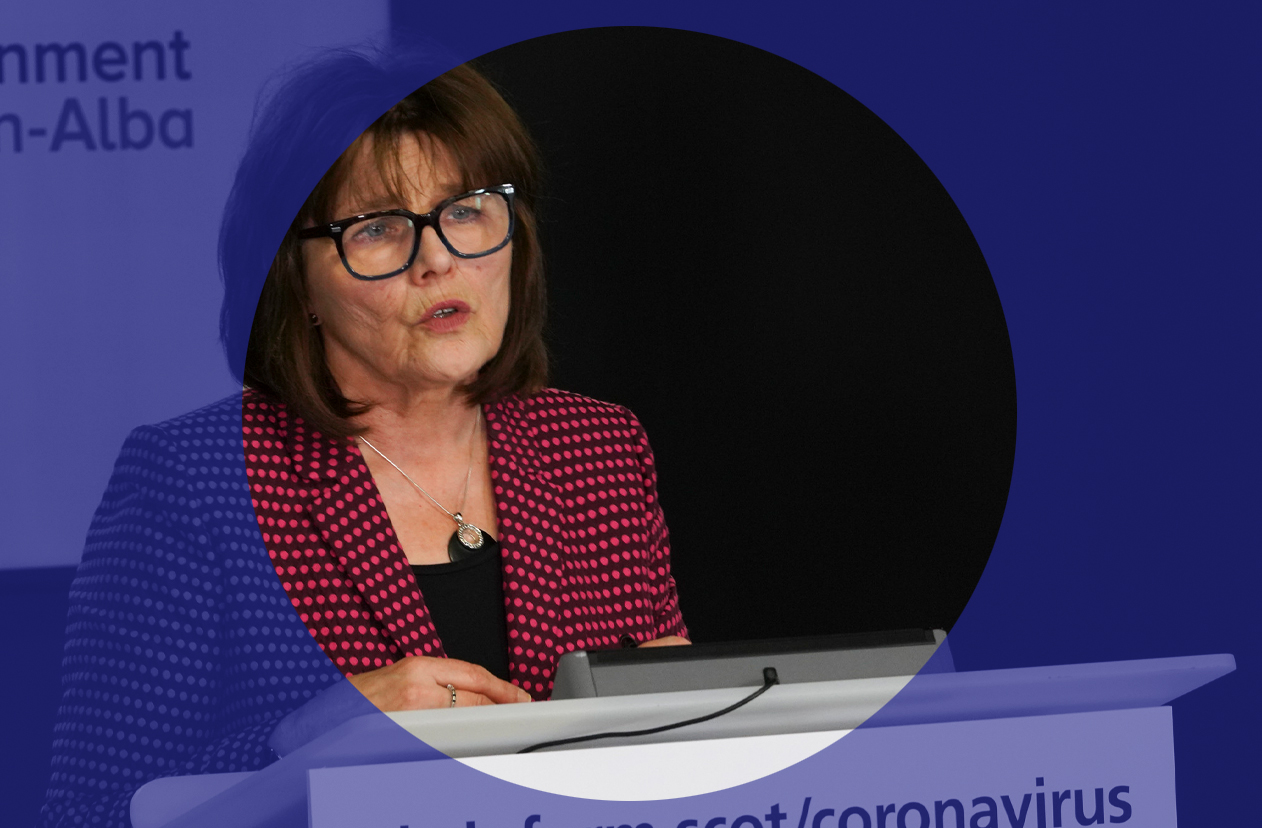 “Accepting Jeanne Freeman at her word, why didn’t she realise what anyone working at the coalface in the sector could have told her – that discharging any infected person from hospital to a care home could have disastrous consequences?”

Nick Kempe, author of the recent Common Weal report on Scotland’s care homes and the Coronavirus pandemic, argues that the Scottish Government has not yet reckoned with the problems facing the sector

ON SUNDAY, Jeanne Freeman, Scotland’s Health Secretary, announced that there should be a review of the care home system once the Coronavirus crisis is over.

This was a partial acknowledgement from the Scottish Government of the scale of the crisis in our care homes and that it goes back a long way, as I argued in ‘A Predictable Disaster’, published by Common Weal last week. A proper inquiry into the care system, and how it has been financialised to put profit before care, has been needed since the Scottish Parliament was created.

Any inquiry, however, needs to avoid the mistakes of the last attempt to review the system, the ‘Review of Long-Term Residential Care’ which was published by the Scottish Government in 2014. That was conducted in partnership with providers, failed to engage with older people, their families or people working in care homes and changed little.

Its main success was to pave the way for the eventual introduction of the Living Wage into care homes, but it avoided looking at the tens of millions of pounds being extracted out of the system in profit and all the other issues associated with low pay, such as poor conditions of employment, staff having to do training in their own time etc.

Some of those issues have now bitten with a vengeance. One example is that the Scottish Government have had to step in to set up arrangements to pay sick pay for care home staff so they don’t have to work when ill.

An inquiry, however radical, won’t deal with the immediate questions of how to protect older people in care homes from Covid-19 – or how to respect their rights, which have been completely trampled over in the last ten weeks – while doing so. For that, we need action.

Unfortunately, the developments over the last week since a ‘Predictable Disaster’ went to press suggest the Scottish Government still has little sense of what is required.

On the staffing crisis in care homes, on 19 May Jeanne Freeman announced in the Scottish Parliament that 895 former social care staff had been recruited and 254 matched into jobs across the whole social sector. Even if almost all eventually ended up working in Scotland’s 697 registered care homes for older people –a highly unlikely scenario – that would provide one new member of staff per care home. This was a sector that has been struggling to recruit for years, due to low pay and poor conditions, had a high vacancy rate before the crisis and has had hundreds of staff off sick or isolating due to Covid-19.

The Scottish Government’s recruitment drive is clearly completely inadequate to address current staff vacancies let alone to the levels needed to care safely for older people in care homes and allow them some contact with the outside world. Using personal protective equipment properly takes time. For example, tasks that might take 15 minutes with non-Covid patients might take double that with non-Covid patients; to assist families to see residents safely might mean taking a resident out into a garden. Such things also take time. That means you need more staff to deliver the same amount of care.

Also on the 19 May,  Jeanne Freeman stated: “We already have an effective system of inspection for social care in Scotland”.  Just how effective is illustrated by what has happened in Home Farm Care Home in Skye, which featured in ‘A Predictable Disaster’ and has been in the news frequently over the last week.  After all the publicity about the Care Inspectorate intending to cancel the home’s registration and talk of Highland Health Board taking it over from the Provider HC-One, it looked at last as though poor care might no longer be tolerated.

Instead, the Care Inspectorate announced to the Sheriff Court last Wednesday that Home Farm Care Home was improving – and so it should have with all the help it was receiving from public authorities – and they asked the Sheriff to allow HC-One another three weeks to remedy their failures.

There could be no better illustration of the flawed culture of “partnership working” and how the Care Inspectorate puts the financial interests of providers before people (free support from Public Authorities to a provider to get back on their feet).  This is a care home which had failed to act on legal requirements to improve staffing and infection control and in which ten people have died from Covid-19.

Then, on Sunday 24 May, Jeanne Freeman “confirmed” that Police Scotland were investigating the circumstances of the deaths of three residents at Home Farm Care Home on Skye. How does this fit with the Care Inspectorate doing an effective job?

Sadly, the Police Investigation is most likely another smokescreen, an appearance of doing something while not being prepared to tackle the fundamental issues. I suspect the police officers at the forefront of the investigation, just like the Care Inspectors who reported on what was going on at Home Farm, won’t be allowed to take action.

The third major issue I will cover here is the discharge of older people from hospital into care homes. Relentless questioning in the Scottish Parliament revealed last week that the numbers of older people discharged without test was four times higher than previously reported, at just under 1000. Given that Covid-19 appears to have already been in hospitals by mid-March, when the great discharge started, this was rather like sending an infected Dominic Cummings to stay with his parents. But in this case, the older people didn’t have separate houses – they were crammed together in shared living spaces.

The Scottish Government still doesn’t appear to understand the issue.  Again, here is Jeanne Freeman in the parliamentary debate on the 19 May: “Quality infection prevention and control, which should exist in our care homes in any circumstance, is the primary way by which we can prevent transmission.” But there was no means of isolating people with Covid-19 in Care Homes – like discrete units with discrete staff teams –  and most staff had nothing like the skills and training of staff in the NHS.

So, accepting Jeanne Freeman at her word, why didn’t she realise what anyone working at the coalface in the sector could have told her – that discharging any infected person from hospital to a care home could have disastrous consequences?

The answer, I believe, is two-fold. One is the rotten system of government where everything has to be portrayed as a success whatever the evidence to the contrary. In this culture, to admit openly that your agency or team can’t do their job properly will end any career you might have had and to argue you need more resources is to invite having your budgets cut even further.  Our whole system of government in Scotland is based on toadying, not truth; hence all the senior public sector managers and board members who might have told Jeanne Freeman she was making an almighty mistake, that would cost hundreds of lives, but stayed silent. As did the people below them and so on down the ladder until you get to the frontline staff who have no power to speak out.

In this rotten system, where there is no transparency and no democracy.  Senior managers tell ministers what they want to hear: “Yes, of course we could free up hospital space by discharging older people into care homes”.

The second reason is the government’s deliberate policy of working with the private sector as equal partners. Jeanne Freeman’ main source of advice is not even the head of the Care Inspectorate – in fact, I doubt he ever gets to bend the ear of Scottish ministers –  it’s Donald Macaskill, Chief Executive of Scottish Care. This is the organisation that represents Care Home Providers and where ultimate power is wielded by the large providers based in tax havens. Mr Macaskill could hardly tell ministers that many of the providers paying his wages were totally unprepared in terms of Infection Control.    That would have undermined 20 years of lobbying about how the private sector was better than then NHS. Added to which was the financial lure of filling unoccupied beds, the key to profit levels. Only a few smaller providers appear, to their credit, to have stopped to think through the personal and financial consequences of Covid-19 getting into their Homes and tried to stop admissions.

Understanding these mistakes, is important if the Scottish Government is now to start taking the actions that are needed and re-inforce some of the recommendations from A Predictable Disaster.

On staffing, the top priority has to be recruitment and training of additional staff.  This should be done through the public sector, a sign of intent that people will be put before profit, and the consequences – for example staff working in Care Homes on different rates – should be sorted out as part of this.

On regulation, the Scottish Government needs to give clear messages – instead of the guddle on Skye – that poor providers will no longer be tolerated.  It has to empower the Care Inspectorate to hand-over failing Homes to the public sector and do so quickly (or ultimately to the voluntary sector or community organisations).  That again will need resources.  Unfortunately, while Jeanne Freeman announced a week ago that the Care Inspectorate has started inspecting services again, based on a risk assessment, the guidance on the Care Inspectorate’s website still says inspections were suspended on 13 March.

On discharge from hospital, Jeanne Freeman was correct about one thing: the longer people are in hospital the more likely they are to be infected.  The testing regime that the Scottish Government has set up is not going to solve that. We are now in the situation where an older person admitted to a hospital overnight and treated successfully might need two tests to get out.  In that time they will be at very high risk of catching the virus, as has been shown by another disaster, at Gartnavel, where 25 people without the virus were transferred and then died.

The answer to this dilemma is that we need, urgently, a new type of intermediate facility, where older people who have been in hospital can be kept apart from other older people, whether in hospitals or in care homes until they can be shown not to have the virus. In some cases this could be an isolated wing/area in a care home with its own dedicated staff team.  But again, that needs resources.

We have an opportunity in Scotland to address these issues.  The Scottish Parliament in the last ten days has been shown at its best with the opposition parties leading the charge, Labour having re-discovered some of its moral purpose and a number of SNP MSPs being prepared to criticise the government.

They have every reason to keep up the pressure, but we also need to create a voice for older people, their families and the staff who care for them.