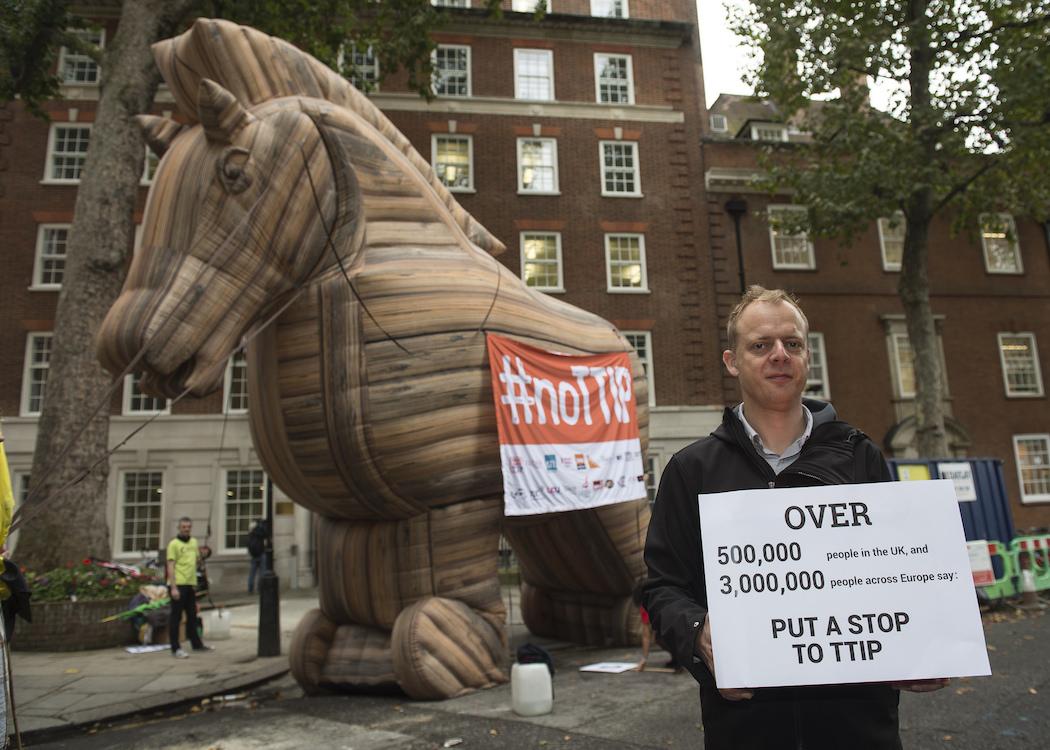 “IT’S US vs big business,” Nick Dearden told an energised room of Scottish activists in Aberdeen. Last weekend he was in Scotland to challenge the UK’s third biggest political party, the SNP, to oppose the so called ‘Transatlantic Trade and Investment Partnership’ (TTIP), a pact its opponents describe as a corporate power grab with severe implications across public services, social protection and the economy.

Now, Scotland has come to Dearden. Eighteen dedicated activists – from a farmer to students to retired grannies – have organised a trip to lobby members of parliament and protest against the secret courts that are thought to give corporations power over the will of parliaments.

“It’s only this kind of activism that really changes stuff,” he says after a meeting to set the group’s objectives. “Emails help. People sitting in an office here writing briefings are an important part of it, but unless ordinary people get involved and go and do stuff like this then nothing changes,”

For Global Justice Now, TTIP – and its lesser known UK-Canada equivalent CETA – are the latest attempts to railroad campaigns for democracy and social justice.

Dearden is concerned the deal risks much of what people cherish in a healthy society, including opening up governments to pro-privatisation law suits, stripping away environmental and trade union legislation and undermining trading standards on the whim of profits.

Although Scotland is not directly represented at the top table, Scottish MEPs are part of the debate and the position the government takes matters in the context of growing opposition to the deal.

Global Justice Now, and various campaigners, succeeded what Dearden describes as “inspiring”, in signing all 55 SNP MPs up to a motion that went further than their previous commitments – including opposing the framework of TTIP.

“Early Day Motions (EDM) don’t in themselves carry any legal weight, but they’re a good way of putting an issue on the political agenda and they make governments think about things twice,” Dearden says.

“So when you have an entire political party signing up to an EDM – and that’s almost unheard of actually – it shows just how much pressure there was in Scotland that every SNP MP signed up, and that’s fantastic.”

“Our point is if you wait to see the full text [of TTIP] it is too late.” Nick Dearden

Resistance is growing in Scotland, England, across Europe – particularly in Germany – and on the other side of the Atlantic. The common concern is the power of corporate interests – and their ability to subvert democracy.

Specifically, TTIP will contain a Industrial State Dispute Settlement (ISDS) court. This gives corporations the power to sue elected government if they are perceived to have acted against the complex details of the financial pact. Despite the wishes of the people, environmental legislation, workers rights, public ownership of water, healthcare and education can all be challenged in corporate courts with little accountability or transparency.

Dearden thinks it is inevitable that any IDS clause will be used to threaten the National Health Service – For instance, by making it a requirement to sell health services in ‘competitive’ contract tendering processes.

“One of the arguments you get quite often from politicians is that we don’t have the full text of TTIP at the moment so we can’t say if we like all of it or don’t like any of it or whatever. Our point is if you wait to see the full text it is too late. If you wait then it will have already been written and then the only power that MEPs will have is to vote for or against it. You can’t change it in any other way,” he says.

“The more politicians and parties that come out at this stage and say “Whatever is in this secret deal we’re going to be voting against it” the more hope that the European Commission will have to back down because they wont be able to get it through the European Parliament or they will start transforming the deal into something completely different.”

“What we’re witnessing is a re-emergence about concern over corporate power on a global scale that we haven’t seen for a long time.” Nick Dearden

The Scottish National Party MPs, the elected representatives of the activist group, are lukewarm on TTIP. The party opposes privatisation of the NHS, and has expressed concern over the secrecy surrounding TTIP negotiations, which are set to be dominated by corporations, the European Commission and US interests.

But for Dearden that deal is just one part of a much larger challenge of globalisation. The ‘Battle in Seattle’ was its peak when tens of thousands of activists shut the city down during the World Trade Organisation summit. The so called ‘North American Free Trade Agreement’ faced prolonged protest as a corporate stitch-up. Today it’s not just TTIP that causes concern, but the Trans Pacific Partnership for US-Asia trade and the UK-Canada equivalent.

“I think that’s one of the reasons I’m excited about this campaign,” Dearden explains. “What we’re witnessing is a re-emergence about concern over corporate power on a global scale that we haven’t seen for a long time. [In the 90s and 2000s] we transformed these issues from something people hadn’t heard about – the G8, the World Trade Organisation, the World Bank and the International Monetary Fund – to issues that engendered massive opposition. We were part of a global movement that believed we were capable of doing something else.”

“Investment sounds like a good thing… [but] It’s speculation, exploitation with resources and people. They [pro-corporate groups] have captured the language so well.” Nick Dearden

Yet despite this resistance being at the apex of demands for a better world there is a constant struggle to explain their case in clear language. The main opponent for Global Justice Now isn’t just corporate power – but the mundane, technocratic branding that surrounds it. Trade. Investment. Partnership. Cooperation. This is the official language of progress, and it can be hard to pick apart.

“We say it’s a corporate power grab and sometimes we just call them ‘pacts’. The idea that this is about setting a bunch of rules that allow everyone a fair go is evidently just rubbish. I’m not in any way a free marketer – but if you were a free marketer like Adam Smith, then he must be turning in his grave about the world that we live in which is controlled by big corporations, controlled by monopolies, by patents and by huge amounts of money made by interest and rent,” Dearden says.

“That’s what TTIP is all about. It’s about extending this semi-feudal system. So the idea this is about trade is rubbish and we are trying to transform that language. They also call it investment deals. Investment sounds like a good thing, it sounds like you’re putting something useful into somewhere else.

“Obviously that’s not really what this investment is. It’s speculation, exploitation with resources and people. They [pro-corporate groups] have captured the language so well and that’s what we’ve got to fight back against.”

“If we don’t stop TTIP here then we are letting down all of those grassroots activists who are putting themselves on the line day after day all across the world.” Nick Dearden

The complete reorientation of our political and economic language isn’t going to happen overnight, and Dearden proves it by accidentally slipping back into the official description of TTIP as a ‘trade deal’ just moments later.

What can you call a mammoth secret financial document which is rejected by millions (3 million in the European Union alone) as the antithesis of a free and fair society? The Glasgow comedian Frankie Boyle, for instance, described the pact as an corporate takeover of democracy . But as long as the mundane description of TTIP as merely an ‘international trade deal’ persists, enthusing public enthusiasm for the issue will always be an uphill struggle.

What, then, keep Dearden and his campaign going?

“I’ve always done these kind of jobs and people always say to me “It must be quite hard because you’re always on the losing side.” It’s not really true. He said that amount of hope and optimism you can get from grassroots groups all around the world is enormous. From people who are doing hardcore jobs and organising in sweat shop factories for a different way of life; peasant farmers that are organising against trade agreements they know will rob them of their livelihood, those people who do it – and have amazing victories – have held back a lot of stuff on trade.

“The World Trade Organisation hasn’t managed to come to an agreement since Seattle (1999). The last time we had something like TTIP was the Multilateral Agreement on Investment in the mid-1990s and we fought that and we beat it. We’re creating red lines all the time.”

For Dearden it is a moral imperative to do what he, and millions of others, are doing to change politics, economics and wider society: “We win by people being organised at a grassroots level all across the world.

“If we don’t stop it here then we are letting down all of those grassroots activists who are putting themselves on the line day after day all across the world. So I gain a lot of strength from that,” he says.

Just miles away from the Global Justice Now offices – in Downing Street and the Palace of Westminster – those who hold power in Britain remain resolutely behind TTIP and all that it entails. Nick and many others will need to hold onto that strength in the months ahead.