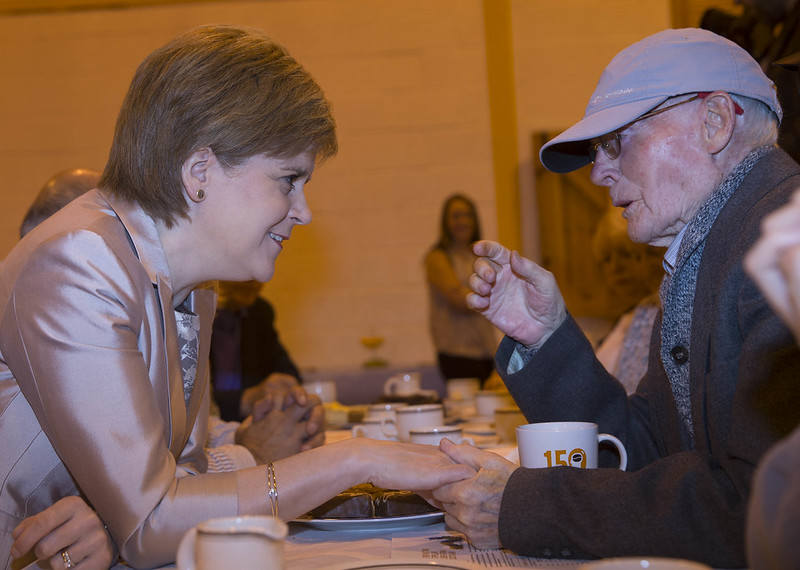 “No one should go hungry or have to rely on charitable food provision in a country as prosperous as Scotland,” says first minister

FIRST MINISTER Nicola Sturgeon has blamed “punitive welfare reforms” by the UK Government on the increasing reliance on food parcels, whilst thanking volunteers across Scotland helping those facing hunger.

Sturgeon expressed her gratitude to food bank volunteers across Scotland on a visit to Broke not Broken, a volunteer-led food bank and advice hub which offers help before people end up in crisis.

However, the first minister lambasted Tory government welfare reforms, such as the introduction of Universal Credit, for fuelling an increasing reliance on food banks.

Data produced by the Independent Food Aid Network [IFAN] showed nearly 600,000 food parcels were distributed across Scotland between April 2018 and September 2019, and increase of 22 per cent compared to the previous period.

Despite these “shocking statistics”, the campaign group A Menu for Change, which produced the research, said the 600,000 figure could be just the “tip of the iceberg”.

Margaret MacLachlan, from A Menu for Change, said: “Experts also warn that data on food parcel distribution only provides a partial picture of the number of Scots struggling to put food on the table, with many choosing to skip meals rather than use a food bank.”

The Scottish Government’s Fair Food Fund has been increased to £3.5 million to help tackle food poverty, with some £2 million committed to a programme providing healthy food throughout the summer holidays when school canteens would usually be closed.

Mary McGinley, from the Helensburgh and Lomond Foodbank, said politicians should do more to tackle the causes of food bank use rather than relying on charitable organisations.

McGinley said: “Today’s figures shine a light on the essential role independent food banks play in offering emergency help to those who are no longer being supported by the social security safety net which isn’t strong enough to provide protection to those who need it.

“While it is heartening that people are willing to donate to and volunteer at food banks, there is a real need for change. There should not be a system which is driving this year-on-year increase in demand. It is not right that people should need to go to a food bank to put a meal on the table,” she said.

Nicola Sturgeon said in a statement: “Broke not Broken have my unending thanks for their kindness. The charity is a shining example of the many compassionate organisations throughout Scotland that are helping those in our society who, through desperation and often as a result of UK welfare cuts, are forced to turn to charities to feed their families.

Read more: Fresh calls for a right to food to be put into Scots law follow shocking food poverty figures

“It is a disgrace that increasing numbers of people across the country are struggling to feed themselves and their families. No one should go hungry or have to rely on charitable food provision in a country as prosperous as Scotland.

“We invested over £1.4 billion in support for low-income households in 2018-19, including over £100 million mitigating the worst impacts of the welfare cuts. Our £3.5 million Fair Food Fund is supporting communities to respond to food insecurity in a way that promotes dignity and helps to move away from charitable food aid as a primary response.

“We will continue to challenge the UK Government’s punitive welfare reforms that take money out of the pockets, and food out of the mouths, of some of the most vulnerable in our society. That is why we are embedding a human rights approach in the design and delivery of our new Scottish social security system.”

Nourish Scotland, who campaign against food insecurity, have called on the Scottish Government to enshrine the “right to food” in Scots law.

Speaking to CommonSpace, a spokesperson for the group said: “We are deeply concerned about the continued rise in emergency food parcel distribution in Scotland, a country where everyone should be able to afford enough food for themselves and their families. Along with our partners in the Scottish Food Coalition, we are calling on the Scottish Government to bring the right to food into Scots law through the upcoming Good Food Nation Bill because this is an important opportunity to establish a more coordinated and cross-sectoral approach to preventing food insecurity in the future.

“We welcome the rights-based approach used to underpin Social Security Scotland and believe that dignity and respect should be at the heart of all our public services.”

Image courtesy of The Scottish Government