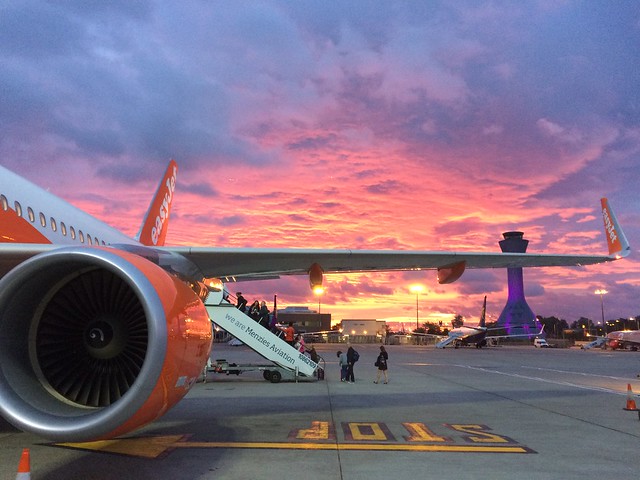 Labour, the Green and the Liberal Democrats pressed the first minister to shelve the aviation tax cut following the Scottish Government’s commitment to achieving net-zero greenhouse gas emissions by 2045

FIRST MINISTER Nicola Sturgeon has announced that the Scottish Government’s delayed flagship plan for an Air Departure Tax (ADT) may be reconsidered, after being challenged by Scottish Labour, the Scottish Greens and the Scottish Liberal Democrats to abandon the reduced levy in the wake of new Scottish targets on reducing emissions.

Adopting new advice from the independent UK Climate Change Committee (CCC) – as was promised by Sturgeon during her recent address at the SNP conference in Edinburgh, at which she also declared a “climate emergency” – Scottish ministers have lodged amendments to the Climate Change Bill to set a legally binding target of net-zero greenhouse gas emissions by 2045 at the latest, with Scotland becoming carbon neutral by 2040.

Scotland now aims to reduce emissions by 70 per cent by 2030, and 90 per cent by 2040 – goals which the Scottish Government have heralded as the “the most ambitious statutory targets in the world for these years.” However, the Committee’s recommended targets for Scotland are contingent on the UK also adopting a net-zero greenhouse emissions target for 2050.

Commenting on the new targets, Climate Change Secretary Roseanna Cunningham said: “I have been consistently clear that our targets must be ambitious, credible and responsible. We must take an evidence-based approach and balance our climate, economic and social responsibilities. We have already halved greenhouse gas emissions from Scotland while growing the economy, so we know we can do it. I am committed to meeting the most ambitious targets possible, and doing so while continuing to build an inclusive and fair economy.

“I call on the UK Government to follow our lead, accept the Committee’s advice, and work with us to achieve this goal.” Climate Change Secretary Roseanna Cunningham

“Every single one of us now needs to take more action – not just the Scottish Government but also all businesses, schools, communities, individuals and organisations. The UK Government must also act.

“The Committee on Climate Change say that Scotland’s ability to meet these world-leading targets is contingent on the UK Government also accepting their advice and using the relevant policy levers that remain reserved. As such, I call on the UK Government to follow our lead, accept the Committee’s advice, and work with us to achieve this goal.”

“As the First Minister recognised last weekend, we are in the grip of a climate emergency and those at the frontline are already suffering. Enshrining this commitment in law puts Scotland amongst the leading group of nations in the world in terms of ambition on climate change, but should now be followed by accelerated immediate action across the board.

“If Nicola Sturgeon is really serious about the climate emergency she should drop her commitment to cut the Air Departure Tax.” Scottish Labour leader Richard Leonard

“Rapidly growing public concern about climate change is sending a strong message to all politicians that rhetoric alone isn’t enough and has to be matched with swift and decisive action. It’s now up to MSPs to show they are listening to public concern by strengthening the Climate Bill to urgently ramp up policy action now and over the next decade.”

However, Chris Stark, chief executive of the CCC, has also argued that meeting the recommended targets would be more difficult if emissions were increased as a result of reducing APD. In their estimation, the Scottish Greens have claimed that the aviation tax cut would result in an increase of CO2 emissions by 60,000 tonnes.

Asked whether Sturgeon should drop APD, Stark said: “It would help immensely with the emissions challenge there is in Scotland.”

While the Scottish Government’s new targets were broadly welcomed in parliament today, Scottish Labour leader Richard Leonard challenged Sturgeon during First Minister’s Questions to abandon ADT, while a similar call was made by the Scottish Greens’ Parliamentary Co-Leader Alison Johnstone.

ADT has been estimated by the Scottish Fiscal Commission to represent a tax cut of £150 million for frequent flyers.

While the rate reduction represented by ADT was originally planned to be introduced on 1 April 2018, with hopes that the tax would be abolished completely by the end of the parliamentary session in 2021, the Scottish Government announced in June last year that the replacement would be deferred by a year until problems relating to an exemption for the air travel-reliant Highlands and Islands had been resolved.

In April this year, public finance minister Kate Forbes announced that that ADT would be delayed even further, partly in light of questions over whether such exemptions should be raised at an EU level due to its possible qualification as state aid.

Reiterating that plans for ADT would not go ahead this year, Sturgeon responded to Leonard’s call for her to abandon her commitment to the levy completely: “The increase in our scale of ambition [on climate targets] today will mean we need to reconsider policies across the whole range of our responsibilities.”

However, Sturgeon did not explicitly commit to abandoning ADT.

Commenting in the aftermath of FMQS, Leonard said: “Nicola Sturgeon has a bold climate change target, but her boldest climate change policy is a £150 million tax cut that benefits the richest the most and actually drives emissions up.

“The SNP tells us that she has factored this in, but that is not good enough. If Nicola Sturgeon is really serious about the climate emergency she should drop her commitment to cut the Air Departure Tax.”

Following her call at FMQs for “immediate action” to tackle the climate emergency in addition to the Scottish Government’s new targets, Alison Johnstone also commented: “I welcome the announcement that the Scottish Government will accept the new targets proposed by the Climate Change Committee. However, an emergency demands immediate action. Last year the world’s climate scientists warned that we have just a decade to deliver the change needed to avoid a climate catastrophe, yet the First Minister was reluctant to name any specific policy change that would be implemented immediately.

“Now that the Scottish Government has declared a climate emergency, it is time to scrap the unfair and environmentally damaging proposal to cut taxes for wealthy frequent flyers and instead invest in everyday transport like buses, trains, walking and cycling.”

Scottish Liberal Democrat energy spokesperson Liam McArthur MSP added: “Last week, the First Minister told Willie Rennie she wouldn’t drop her plans for a £250 million tax cut for the aviation industry, instead boasting that the government would just measure the extra emissions instead.

“Now that the Scottish Government has declared a climate emergency, it is time to scrap the unfair and environmentally damaging proposal to cut taxes for wealthy frequent flyers.” Green MSP Alison Johnstone

Citing Chris Stark’s recent comments, McArthur said: “The First Minister should accept this advice, scrap the aviation tax and use the money instead to deliver on an early target for government and public bodies to phase out their polluting vehicles.”

Earlier today, the Scottish Greens climate spokesperson Mark Ruskell also announced that he will be moving an amendment to the Scottish Climate Bill to increase the targeted reduction in emissions to 80 per cent by 2030, “to drive real transformative action during this critical window of transition.”

Ruskell commented: “A Green New Deal for Scotland must now be put in place that would use the regulatory and fiscal powers available to the Scottish Parliament to deliver big emission reductions and create hundreds of thousands of lasting jobs in the low carbon economy.”