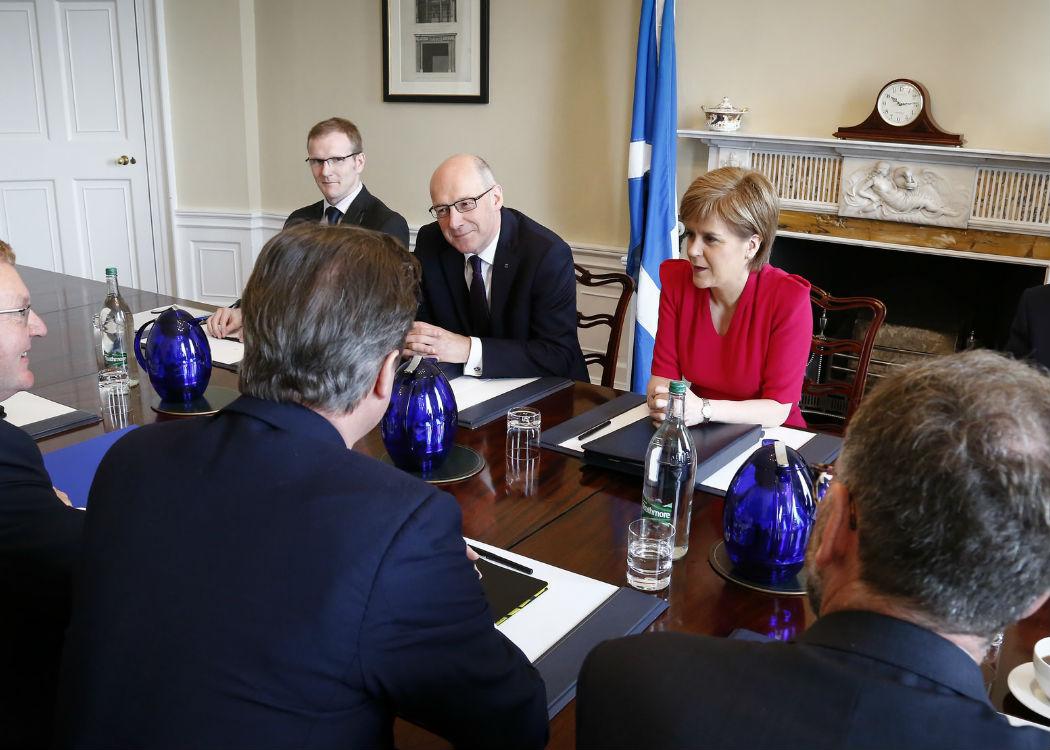 THE CLAMOUR for a second independence referendum will be “unstoppable” if Scotland is forced to exit the EU against its will, Nicola Sturgeon will warn.

The first minister will make her strongest comments yet on the possible effects of an EU exit in a speech today.

She will say that if Scotland votes to stay part of the EU in the planned vote, but the UK as a whole votes to leave, then there will be a “groundswell of anger among ordinary people” that could trigger a second independence vote.

Following the Conservatives election victory, an in/out vote on EU membership is set to take place and could be as soon as next year.

It will follow Prime Minister David Cameron’s attempts to renegotiate Britain’s membership of the EU on issues such as immigration and benefits.

The SNP has said that a “double majority” should be required for the vote, meaning that separate majorities would be required in all four UK nations in order for an exit to take place.

Warning of a “backlash”, if Scotland is forced to exit, Sturgeon will say: “Quite what the result of that would be, one-one knows [sic].

“But I have stated before that this could be one scenario producing the kind of change in material circumstances which would precipitate popular demand for a second independence referendum.

“Bluntly, I believe the groundswell of anger among ordinary people in Scotland in these circumstances could produce a clamour for another independence referendum which may well be unstoppable.

“Of course, it is open to the UK Government to stop that happening by agreeing to the double majority.”

As she addresses the European Policy Centre in Brussles today, Sturgeon will also accuse the UK government of failing to promote the positives of EU membership.

She will argue that unless they “give people something to vote for” in the referendum then they could risk leaving the issue unresolved, even if the UK chooses to stay in.

“Some UK Government rhetoric creates the impression that EU membership isn’t beneficial at present – it will only become beneficial if we achieve big enough reforms,” the first minister will say.

“That approach makes it harder to articulate the benefits we gain from membership.

“There’s a danger the UK will focus the debate on the size of the reforms achieved, rather than the bigger picture of the value and importance of the EU.

“Instead of just arguing against the risks of change, the UK Government should promote the EU’s achievements.

“If it fails to do that, then even if it wins the vote, it may not resolve the issue.”

Sturgeon’s comments will follow her predecessor Alex Salmond’s call for a “distinctly strong Scottish voice in the EU referendum”.

As the SNP’s Westminster spokesperson on foreign affairs, he is set to play a prominent role in the campaign and he has called for a reprioritisation of the debate around EU reform.

“We need a campaign that concentrates on the real issues that we have to face,” Salmond said in the House of Commons yesterday.

“An EU wide strategy to deal with the tragedy unfolding every day in the Mediterranean: a campaign that ensures that we take multi-national action on climate change and that promotes a living wage to give dignity to workers .

“These are some of the issues – the debate must not be dragged down to the Tory and Ukip Euro-sceptic view which dominates the Westminster parties thinking.”