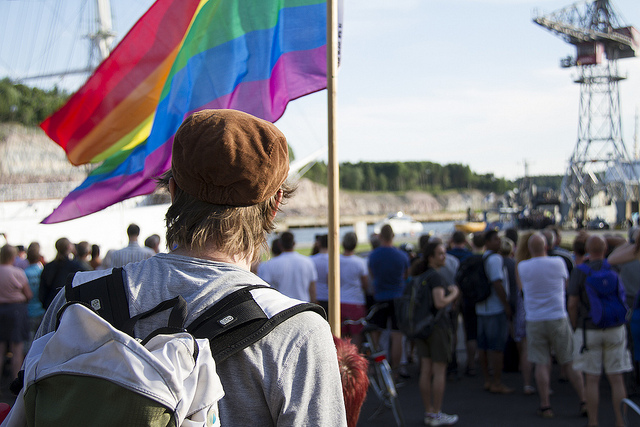 The First Minister told a unified parliament: “The wrong was committed by the state”

FIRST MINISTER NICOLA STURGEON has offered an apology without reservation to the thousands of gay men in Scotland convicted of same-sex sexual offences that are no longer illegal under Scots law.

The apology follows Monday’s introduction of the Historic Sexual Offences (Pardons and Disregards) (Scotland) Act by Cabinet Secretary for Justice Michael Matheson, which will allow for the removal of any such convictions from criminal records.

The often-combative chamber of the Scottish Parliament joined Sturgeon in a rare display of unity and agreement, as she described both the apology and the new legislation as “an important milestone in achieving true equality from Scotland’s LGBTI community.”

The Scottish bill, unlike similar legislation in the rest of the UK, provides an automatic pardon to all those who were convicted in Scotland of such offences, for those who are still living as well as doing so posthumously for those who have died. In the rest of the UK, the pardon does not apply to those still living unless they specifically apply for it. Scottish LGBTI charity the Equality Network estimates that 98 per cent of those still living with such convictions in the wider UK have not received a pardon.

The Scottish bill also covers all offences used in the past in a discriminatory manner, such as “importuning”, which the Equality Network describes as “chatting up other men.” Legislation in the rest of the UK currently does cover such convictions.

Speaking in the chamber, Sturgeon continued: “Scotland has travelled so far in recent years in relation to LGBTI quality that it still shocks us that as recently as 1980 – well within my lifetime – consenting sexual activity between men was still classed as criminal activity in this country, and the age of consent was only lowered to 16 in 2001, two years after this parliament came into being.

“Even within the lifetime of this parliament, this nation’s laws have created suffering and perpetuated injustice.” First Minister Nicola Sturgeon

“Before then, hundreds of people in Scotland were liable to be convicted as criminals, simply for loving another adult.

“Even within the lifetime of this parliament, this nation’s laws have created suffering and perpetuated injustice. The legislation we have published today addresses that injustice.”

Explaining the reasoning behind the new act, Sturgeon said: “The legislation therefore has both a symbolic and a practical value. The pardon sends this unequivocal message to anyone convicted of an offence for activity which is now legal – the law should not have treated you as criminals, and you should not now be considered as such. Instead, this parliament recognises that a wrong was done to you.

“The law should not have treated you as criminals, and you should not now be considered as such.” First Minister Nicola Sturgeon

“At present, as the Equality Network and others have highlighted to us, there are some people who were convicted merely of showing love and affection to their partner, who still have to explain their criminal record every time they move job or apply for a promotion. That is quite simply unacceptable, and we are determined that that will end.”

“For people convicted of same-sex sexual activity that is now legal, the wrong has been committed by the state to them, not by individuals.” First Minister Nicola Sturgeon

There were understated yet evident displays of emotion from those watching in the public gallery as the first minister went on: “A pardon is of course the correct legal remedy to apply for the convictions we are talking about today. But the terms pardon might still imply to some people that parliament sees them as having done something wrong. However, as all of us know, that is not the case here.

“For people convicted of same-sex sexual activity that is now legal, the wrong has been committed by the state to them, not by individuals. These individuals, therefore, deserve an unqualified apology as well as a pardon.

“As First Minister, I categorically, unequivocally and wholeheartedly apologize for those laws and for the hurt and the harm that they caused for so many.” First Minister Nicola Sturgeon

“That apology of course can only come from the government and from parliament, not from the justice system – after all, the courts, prosecutors and the police were enforcing the law of the land at the time. The simple fact is that parliamentarians in Scotland over many decades supported, or at least accepted laws which we now recognise to have been completely unjust.

“So today, as First Minister, I categorically, unequivocally and wholeheartedly apologize for those laws and for the hurt and the harm that they caused for so many.”

Sturgeon continued, in a theme echoed by opposition party speakers who followed, by emphasising that the battle against intolerance and bigotry was not yet won.

“While today’s legislation does mark an important milestone in Scotland’s progress towards LGBTI equality,” she said, “our journey is not yet complete. Considering how recently it that the laws I have just outlined were in force, it is remarkable and indeed inspiring that Scotland is now considered to be one of the most progressive countries in Europe when it comes to LGBTI equality.

“We have still got work to do.” First Minister Nicola Sturgeon

But as all of us know, until we live in a country – in fact, until we live in a world – where no young person suffers hate, or fear, or discrimination or prejudice simply because of their sexual orientation or their gender identity, then we have still got work to do.

Sturgeon’s statement was followed by Scottish Conservative leader Ruth Davidson, who said: “At the time that this parliament passed the equal marriage legislation, I commented on how fast Scotland had changed, was changing, and that the change was for the better.

“I’m not yet 40, and the idea that in my lifetime we’ve gone from consenting adults being persecuted and criminalised for forming a loving relationship, to those same couples having marriage extended to them also is remarkable progress.

“Most estimates place the number of men in Scotland who will now be pardoned in the thousands, both living and dead, and to give a sense of wider scale, Stonewall estimate the number of men convicted across the UK to be anything up to 100,000.

“So we’re not talking about a few unlucky individuals. We’re talking about entire generations who faced the criminalisation of love.”

Davidson emphasised that while the Tories would scrutinise the practical elements of the legislation to ensure there were no unintended legal consequences, she welcomed both Sturgeon’s statements and her sentiments.

“This matters because it affects men who are alive today. Men whose lives were destroyed by legislation which promoted fear and hate.” Labour MSP Kezia Dugdale

Former Scottish Labour leader Kezia Dugdale followed by cementing the relevancy of this legislation: “This matters because it affects men who are alive today. Men whose lives were destroyed by legislation which promoted fear and hate.

“Laws that said the love of two men was unnatural, something other, something criminal, soothing wrong. Feeding intolerance and homophobia.

“But it also matters to the those who loved and still miss the men who are no longer with us today. Men who died with criminal records. Many who took their own lives because they could no longer bear the shame and isolation they faced. And our Scotland today, however proud we are of it, still sees gay men more likely to consider suicide.

“And Stonewall Scotland’s 2017 school report tells us that 1 in 4 young LGBT Scots have considered ending their own life. A truly shocking figure.

“In my adult lifetime, the cause of the LGBT community has moved from fighting against homophobia and demanding human rights to fighting for inclusion and equal rights.

“We should be proud of that journey but not complacent.”

Both Sturgeon and Dugdale separately praised the work of the Tie campaign, which aims to achieve LGBTI-inclusive education in Scotland, and which politicians from across the Scottish political spectrum have pledged to work with.

“I came out at a time when the age of consent for gay and bisexual men was still 21, where consenting relationships – normal teenage relationships, just holding hands – would at theory have risked the possibility of arrest.” Scottish Green co-convener Patrick Harvie

Scottish Green co-convener Patrick Harvie, also reminding all present of how recently legislated homophobia was a dominant aspect of the social order in Scotland and the wider UK, noted that when he first came out as a gay man, the chief constable of Greater Manchester police was “the odious James Anderton, ‘God’s Cop’, who built a reputation for using his office to pursue his particular variety of religious extremism” and was supported by Margaret Thatcher’s government while pursuing a campaign of calculated police persecution against the gay community.

Harvie said: “I very much thank the First Minister for having made the apology we have heard today. I came out at a time when the age of consent for gay and bisexual men was still 21, where consenting relationships – normal teenage relationships, just holding hands – would at theory have risked the possibility of arrest.”

Scottish Liberal Democrat leader Willie Rennie concluded those offering comment and endorsement the first minister’s apology, but concluded the session with words of warning: “Individual human rights – particularly those of gay people – are not universal throughout the world.”