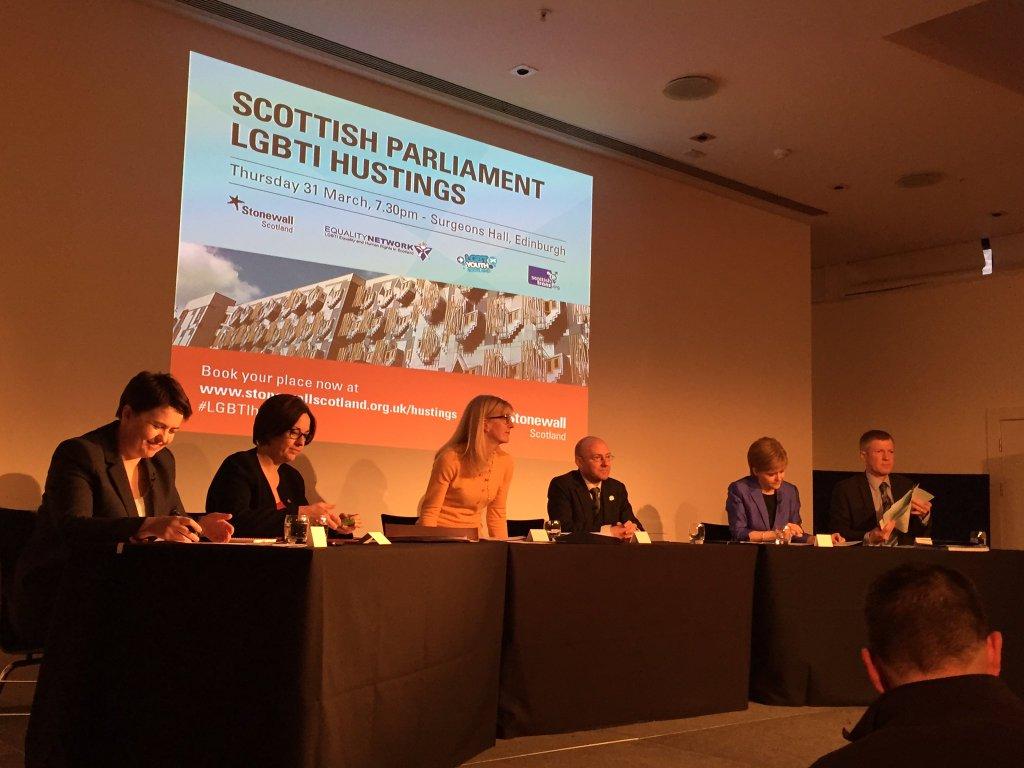 FIRST MINISTER NICOLA STURGEON is avoiding a commitment to earmark specific funding for teacher training to create LGBT+ inclusive education in Scottish schools, as called for by SNP campaigners.

Speaking at an LGBT+ hustings for the Scottish elections in May 2016, the SNP leader pledged to continue working with the Time for Inclusive Education (Tie) campaign, and to introduce a limited programme of teacher training, but would not commit to specific funding for the scheme.

Training funding is a specific demand of SNP Youth and Students groups, who developed policy proposals with the Tie campaign.

CommonSpace asked Sturgeon immediately after the event if she would commit to specific funding, but she declined to answer, saying, in reference to media questions: “I’m not doing this right now.”

The hustings, sponsored by four of the largest LGBT+ equality organisations in Scotland including Stonewall Scotland, the Equality Network, LGBT Youth Scotland and the Transgender alliance, saw politicians hear questions from hundreds of members of the LGBT+ community in the largest ever election event of its kind in Scotland. Calls for teacher training to provide LGBT+ inclusive education in Scotland’s schools dominated the hustings.

Sturgeon announced five key pedges to co-incide with the hustings, including a promise that the SNP would introduce teacher training for inclusive education for all new, guidance and promoted teachers,

CommonSpace asked Sturgeon if she would commit to specific funding, but she declined to answer, saying, in reference to media questions: “I’m not doing this right now.”

Sturgeon said she supported the Time for Inclusive Education campaign , the originator of calls for inclusive education, and pledged to work with the campaign if the SNP formed the next government.

She said: “At our conference, we had a moving debate and passed a motion in favour of inclusive education. I think what Time for Inclusive Education are doing is impressive and I hope that whoever forms the next Scottish Government will work with them, as we will.”

Inclusive education would mean schools teaching young people about the full range of human sexualities and identities in an effort to reduce the abuse and stigma faced by LGBT+ youth.

Dugdale raised the importance of inclusive education being represented across the school curriculum, in classes such as history and modern studies alongside personal and social education (PSE).

Rennie pressed the SNP to go further than their pledge and called for all teachers to receive training.

Patrick Harvie received the loudest cheers of the night, calling on political parties to not allow people who oppose LGBT+ equality to run in elections.

Responding to Sturgeon’s comments that she would continue to work with Tie, a campaign spokesperson said: “We are pleased that Nicola has agreed to work with us and we welcome her support.

“Her party’s current proposals do not go far enough and it is vital that the next strategy to tackle LGBT-phobia in Scottish schools is the right one – for too long we have dealt with a Section 28 hangover, the next Scottish Government must tackle this properly.

“We are happy to work with the SNP, and all other parties within the next parliament to ensure that our education system is inclusive of LGBT+ identities.”

The election hopefuls spoke on a range of topics including reforms to end gender binary classification in public life, the possibilities of extending civil partnerships to mixed sex couples, and changes to laws restricting the right of people to decide their sex or gender.

Harvie received the loudest cheers of the night, calling on political parties to not allow people who oppose LGBT+ equality to run in elections.

Sturgeon said she would make changes to allow people to legally redefine their gender as neither man nor woman.