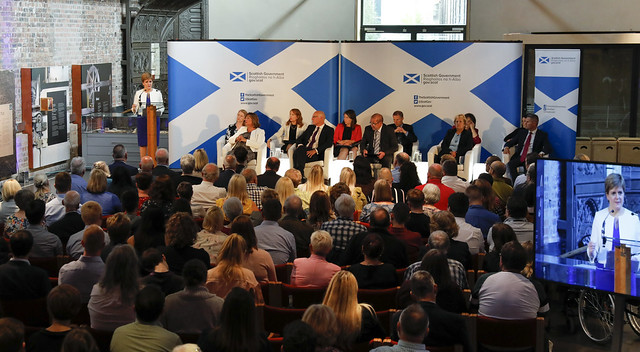 Speaking at a public meeting of the Scottish cabinet in Stirling, the first minister said that a Job Guarantee would be “fleshed out” in the next Programme for Government

FIRST MINISTER Nicola Sturgeon has tentatively revealed that some form of Job Guarantee scheme may be included in the next Programme for Government in September.

Speaking at a public meeting of the Scottish Cabinet in Stirling on 7 August, Sturgeon was asked whether a Job Guarantee scheme would be part of her vision for a Scottish Green New Deal.

A Job Guarantee is an economic policy intended to address both inflation and unemployment, which is generally understood to involve the state acting as an ‘employer of last resort’ to the unemployed.

Different versions of the idea have been proposed across the world, most recently in the United States by presidential candidate Senator Bernie Sanders, who in 2018 announced a plan for the US federal government to guarantee a job to every American worker “who wants or needs one” across hundreds of projects in areas such as education, infrastructure and caregiving.

“I think we have to look at things like that in order to make the transition in a just and fair way.” First Minister Nicola Sturgeon

Responding to the question, Sturgeon said: “We’re currently working our way through our Programme for Government, which we’ll set out September, where climate change is and issues like that are absolutely at the heart of what we’re doing. Things like this (the Job Guarantee) will be fleshed out a little bit more at that point. But ‘yes’ is the short answer.

Sturgeon continued: “I think we have to look at things like that in order to make the transition in a just and fair way. One of the things which I think we’re one of the first countries in the world to do was set up a Just Transition Commission, which is to make sure we don’t leave large legacies of unemployment as we go through this transition. So, watch this space in terms of how some of our policies develop.”

Finance Secretary Derek Mackay added that the key to a potential Job Guarantee scheme was more powers being devolved to Scotland.

Mackay said: “In terms of the Guarantee – with record low unemployment, which is to be welcomed – beneath that there are issues about underemployment and exploitation which we would like to do more about if we had all the powers around employment law.

“I welcome the positive attitude the cabinet holds with regard to a Job Guarantee programme being part of their vision of a Scottish Green New Deal.” SNP activist Cameron Archibald

Commenting, MMT Scotland co-founder and SNP activist Cameron Archibald, who put the question to the first minister, told CommonSpace: “I welcome the positive attitude the cabinet holds with regard to a Job Guarantee programme being part of their vision of a Scottish Green New Deal.

“Scotland needs progressive ideas if we are to protect our planet from the serious dangers of climate change. Derek Mackay is correct that more powers are required for the Scottish Government to properly implement a Job Guarantee programme. Labour laws and monetary sovereignty are absolutely vital in helping pull Scots out of poverty.

“A Job Guarantee programme is more than just increasing Scotland’s productivity. Article 23 of the Universal Declaration of Human Rights states everyone has the right to work, to free choice of employment, to just and favourable conditions of work and to protection against unemployment. International Labour Organization Public Employment programmes offer employment opportunities, income security, extended social protection and basic income security without compromising conditions of work. Martin Luther King, in the Freedom Budget, included a federal jobs guarantee, universal health care, and a basic income. It recognised that a nation’s success rested on employment.

“Large steps can be taken to eliminate poverty if enough decent jobs are made available for all who are willing to work. By adopting a state funded job guarantee scheme, aligned with the above principles, policies and conventions, Scotland has a unique opportunity to realise a fairer and more equal society.”

Also commenting, Common Weal director Robin McAlpine added: “A Green New Deal has to be a transformational project; if it is not changing the way we live and work fundamentally, it’s not working.

“We don’t have the powers in Scotland to do this properly. The Scottish Government’s economic strategy certainly isn’t pointing in that direction at the moment, but if a Green New Deal isn’t enough to wake politicians enough to what we need to do, it’s hard to see what will be.”