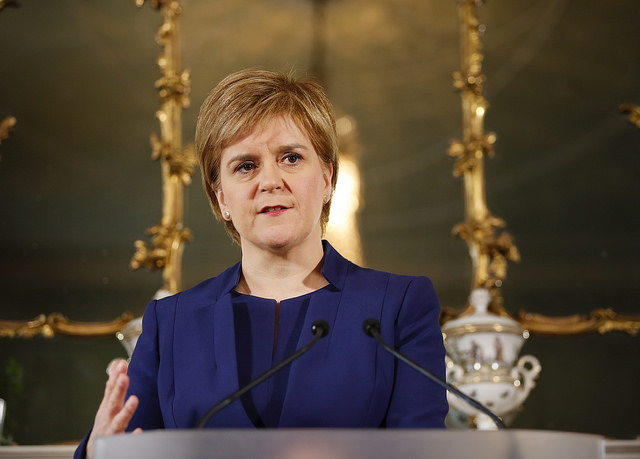 The first minister said she wants Scotland “to be the inventor and ­producer of the innovations that shape the future, not just a consumer of them”

NICOLA STURGEON has signalled a new focus in the Scottish Government’s plans for the national economy, indicating a move away from traditional oil and gas priorities to emergent technologies.

In a speech at Spirit Aerospace in Prestwick in her native Ayrshire yesterday, Sturgeon told staff: “I am determined that Scotland leads on the key technological and social changes. I want Scotland to be the inventor and ­producer of the innovations that shape the future, not just a consumer of them.”

High-tech industries where such innovations could be developed include renewables, which has been an increasing priority for the SNP during its decade in power, as well as aerospace, life sciences and financial technology.

“I am determined that Scotland leads on the key technological and social changes.” First minister Nicola Sturgeon

Increasing automation within the Scottish economy was the subject of a seminar by the Scotland’s Future Forums in February, where Future Forums director and co-chair of the Scottish Government’s Fair Work Convention Anne Douglas outlined the Convention’s vision that, by 2025, people in Scotland will have “a world-leading working life where fair work drives success, wellbeing and prosperity for individuals, businesses, organisations and society,” and endorsed the ‘Fair Work Framework’ as a means of achieving that vision.

Also revealed yesterday were a package of measures for boosting economic growth, including an increase in public support for research and development from £22m to £37m per year for the next three years.

Over the coming weeks, Sturgeon will also outline plans for Scotland to be an “early adopter” of electric vehicle technology.

Sturgeon’s Ayrshire speech follows up her announcement in June, when she told MSPs that the SNP would take the summer to “take stock and refresh” after a decade in power before revealing a new vision for Scotland. Following the release of the GERS figures and the subsequent debate over the relevance of Scotland’s notional deficit, her speech also suggests the Scottish Government’s intention to focus more policy discussion on the Scottish economy, prior to the new session of the Scottish Parliament next week.