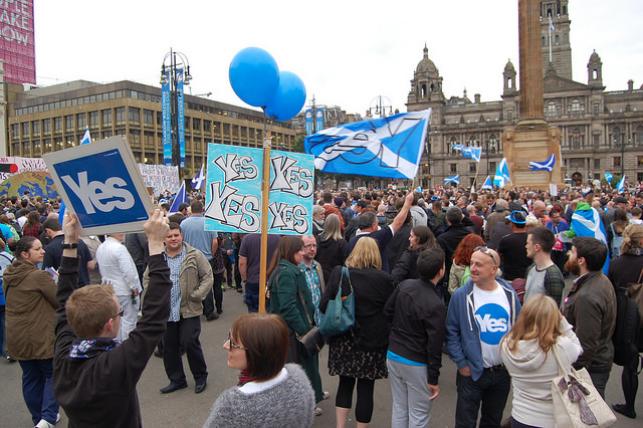 The first minister announced that the SNP will introduce legislation for a referendum next month, and confirmed plans for it to be passed by the end of the year

FIRST MINISTER Nicola Sturgeon has announced that legislation for a second independence referendum will be introduced in Holyrood in May, with plans for it to be passed by the end of the year.

In anticipation of this potential vote, the SNP leader said in her speech to party conference in Edinburgh that this summer will see the launch of what she described as “the biggest campaign on the economics of independence in our party’s history,” as well as the creation of a Social Justice and Fairness Commission.

Addressing UK Government threats to block any future referendum on independence, Sturgeon accused the Tories of wanting to “veto Scottish democracy”, arguing that the Scottish people’s “right to choose” its constitutional future had been mandated in two elections.

This follows Sturgeon’s statement to the Scottish Parliament on 24 April that she would seek a second referendum before the end of the current parliamentary term in 2021, and her challenge to opposition parties to introduce their own proposals for reforming Scotland’s devolution settlement.

“Next month, we will introduce legislation for a referendum. And we plan to pass it by the end of this year.” First Minister Nicola Sturgeon

Addressing the SNP conference in Edinburgh today [28 April], Sturgeon said: “Next month, we will introduce legislation for a referendum. And we plan to pass it by the end of this year.

“The UK Government says it will block Scotland’s right to choose. A right to choose mandated in not just one but two elections, and endorsed by the Scottish Parliament. The Tories – they want to veto Scottish democracy.

Sturgeon further criticised the UK Government’s justifications for opposing a further plebiscite, citing recent polling which put support for independence in Scotland at 49 per cent.

Sturgeon’s combative rhetoric stood in contrast with her address to Holyrood earlier in the week, in which she acknowledged she would seek to replicate the consensus between the Scottish and UK Government that led to the 2012 Edinburgh Agreement, which legitimised the 2014 independence referendum by mutual agreement.

Following a polarised debate on Saturday which saw the Growth Commission passed with an amendment stating a Scottish currency should be introduced as soon as is practicable after independence, Sturgeon did not mention the Growth Commission by name in her speech, and made no reference to the controversial ‘six tests’ for establishing a Scottish currency, which has been at the centre of the debate in the party, including over whether yesterday’s passed amendment rendered the tests redundant or not.

Describing the new campaign on the economics of independence, Sturgeon detailed the SNP’s plan to distribute copies of ‘An independent Scotland – household guide’ to every home in Scotland: “All 2.4 million of them.”

Sturgeon continued: “Our new economic plan demonstrates the potential of an independent Scotland. It stresses the importance of social justice and equality.

“That is why I am announcing today the next step for the SNP in setting out our vision of a fairer, independent Scotland. Building on the foundation of Andrew Wilson’s work on the economy, I am now setting up a Social Justice and Fairness Commission.”

This commission, Sturgeon said, “will set out how the proceeds of economic growth in an independent Scotland can be shared much more fairly,” and will demonstrate how the powers of independence could be used to “end poverty, achieve full employment, and drive equality for all.”

Sturgeon told SNP delegates: “The fact is this. Independence will mean little if it does not ensure a safe, warm home for everyone to live in, a fair chance for everyone to get on in life, and bring an end to the shameful Westminster system which in 21st century Scotland leaves people without enough money to feed their families at the end of the week.

“We are one of the wealthiest countries in the world. But we will only be a truly rich society when we ensure that not a single man, woman or child has to rely on a food bank to eat. That is the prize of independence.”

This follows the defeat last month of a motion by the Scottish Greens calling upon the Scottish Parliament to issue such a declaration, and the publication of an open letter earlier this week backed by 144 scientists from 14 Scottish universities and research institutes, calling on Environment Secretary Roseanna Cunningham to recognise a climate emergency.

Sturgeon said: “A few weeks ago, I met some of the young climate change campaigners who’ve gone on strike from school to raise awareness of their cause. They want governments around the world to declare a climate emergency. They say that’s what the science tells us. And they are right.

“So today, as First Minister of Scotland, I am declaring that there is a climate emergency.”

Sturgeon acknowledged that the Scottish Government has been urged to go further in tackling climate changes, before committing to follow new scientific advice on Scottish climate targets, expected to be published next week, a commitment also made by Cunningham during a debate in the Scottish Parliament earlier this month.

Sturgeon said: “I am making this public promise to the young people I met, and to their entire generation. If that advice says we can go further or go faster, we will do so.

“Scotland will lead by example.”

Responding to Scotland’s housing crisis, Sturgeon also unveiled an new £150 million scheme to help first-time buyers with loans of up to £25,000.

Describing the current plight of young people in Scotland trying to get onto the property ladder, Sturgeon highlighted that the average age of a first-time buyer is now 35, describing this reality as “an issue of generational fairness.”

Sturgeon said: “In a fair and equitable country that cannot stand. And so we will act. We will help young people with the deposits they need. I am announcing today a new £150 million scheme.

“If buyers can find just 5 per cent of the value of their new house from their own funds, we will do the rest. Starting later this year and running until the end of this parliament, we will offer first-time buyers loans of up to £25,000 to fund or top up their deposit.”

The First Minister also committed to regulating short-term lets, following the explosion of Airbnbs in the capital and the Highlands in recent years.

She said: “For many people, accommodation provider Airbnb has enabled cheaper, more flexible travel. It’s one of the reasons Scotland’s tourism industry is booming. But for others – particularly in tourist hot spots, like the centre of this city – it is making it harder to find homes to live in.”

Elsewhere in her conference address, Sturgeon reiterated defence of an independent Scotland’s membership of the European Union, whilst acknowledging the validity of the criticism the EU has aroused.

Making the case for an SNP vote in May’s European elections, Sturgeon said: “Our message will be clear and direct. And unlike Labour’s, it will be unambiguous. Scotland’s not for Brexit, Scotland’s for Europe.”

Portraying the SNP as the only safe hands that pro-EU voters in Scotland could turn to, Sturgeon argued: “Having failed to force her disastrous plan through Parliament, the Prime Minister is now looking for help from Labour.

Framing the case for independence in internationalist terms, the First Minister drew links between the values she saw perceived within the European community, and the treatment of Scotland within the UK, saying: “All of these nations have come together to share sovereignty for mutual benefit, and on the basis of equality and common values.

“The respect, support and solidarity they receive in return stands in stark contrast to the contemptuous treatment of Scotland by Westminster.

“That is why it is now time for Scotland to become a truly equal partner in the British Isles. It is time to take our place among the family of independent European nations.”