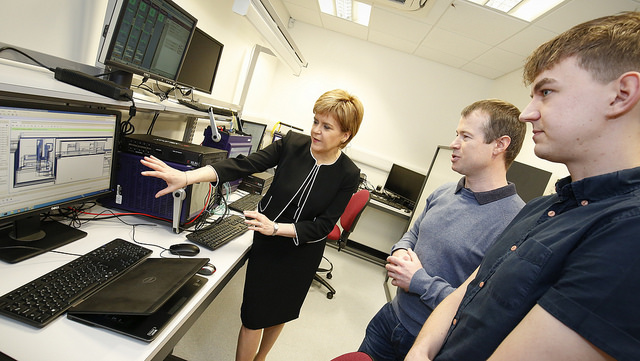 THE ANNOUNCEMENT OF £3.8M to be invested in an Edinburgh technology research facility by US firm Xilinx Inc might allay concerns about the negative impact of Brexit on the Scottish tech sector, especially key industries to Edinburgh and Dundee.

A recent report on the state of the videogame industry in the UK conducted by the Association for UK Interactive Entertainment (UKIE) highlights the danger to the major part of the Dundee and Edinburgh economies, with Brexit set to have negative consequences to videogame companies across the country.

Firefly Studios, famous for the Stronghold series, currently employs 7 EU staff in its Aberdeen offices. An employee said that Brexit is “potentially very damaging because our game has players worldwide and we employee Community Managerss to make sure those games are running smoothly.” While they do not currently have any plans to relocate, the company is waiting “until we have more details before we can put in plans for when Brexit happens.”

One of the EU staff at Firefly expressed his concerns about his future in the country:

“As I’ve been here since 2010, I will be seeking ways to obtain the British citizenship in the next few months, although I am not entirely sure if I will be eligible. The whole process seems very confusing to me. I’ve figured that I already have a right to stay and I am not sure if I will be able to keep this right later. […]I definitely believe that, in case Scotland goes independent, it will be keen to provide us EU citizens who lived here long enough with Scottish citizenship. If Scotland becomes independent, I will be seeking ways to obtain the Scottish citizenship.”

Scottish company Blazing Griffin criticized the barriers to entry and the complexities of obtaining a Tier 2 visa, and said “any new immigration system must be made more efficient and easy for games businesses of all sizes – as well as possible employees – to access. Otherwise, the UK risks losing talented, intelligent individuals to other countries with fewer barriers to entry.”

The prospect of losing EU staff will come as a blow especially to Dundee and the Northeast, where a third of Scotland’s £68m videogame industry companies are based. Between 2009 and 2014, while the city lost nearly 2’000 jobs, the professional tech industry saw an increase of 300, the highest recorded. However, 87% of UK firms confirmed that they have hired non-UK candidates because the domestic applicants “did not have the right skills or specific experience required”.

According to the report, 40% of UK videogame firms are considering relocating outside of the UK. A main reason for this is the high number of European nationals with the necessary skills that British tech firms rely on. 57% of UK videogame firms employ EU staff, who make up on average 34% of these companies’ staff. With Brexit, these companies are now finding it harder to attract European staff, with 60% reporting increased difficulty in retaining global talent as a result.

Programming is the largest employment sector for EU workers in Scotland, with 18.5% of Europeans working as programmers.