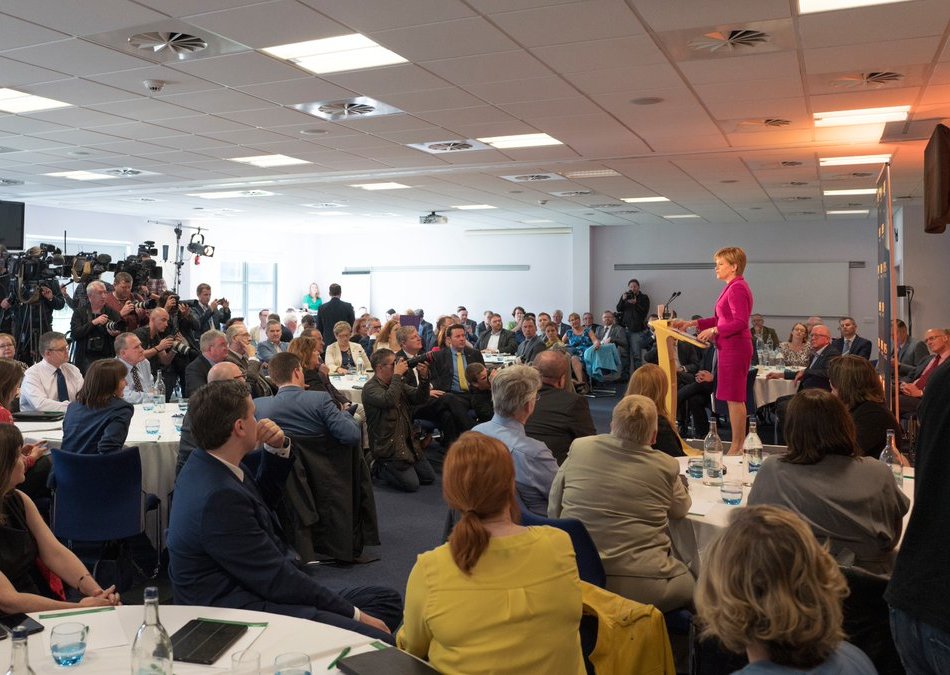 Addressing the SNP’s parliamentarians, Sturgeon raised the “seismic changes” of the Brexit vote and the fracturing of Labour’s Westminster group as reasons to re-examine Scotland’s constitutional options.

Sturgeon claimed her own leadership in Holyrood represents the progressive alternative to threats to the nation’s economy and democracy from a generation of Tory rule and the economic risks of Brexit.

“The UK that existed before June 23 has fundamentally changed. The debate now is whether we should go forward, protecting our place as a European nation or go backwards, under a Tory government with very different priorities. And while we will pursue all options to protect our interests, the debate must include an examination of independence in what are profoundly changed circumstances,” Sturgeon said.

Sturgeon reiterated the threats to Scotland’s economy, such as its financial services and universities sector, from a ‘hard Brexit’ – which would mean leaving the EU’s single market for goods and services.

“The debate now is whether we should go forward, protecting our place as a European nation or go backwards, under a Tory government with very different priorities.” Nicola Sturgeon

She also highlighted the divisions in the Labour party, suggesting that no one now believes the party can win a general election.

In response, Sturgeon promised to campaign to keep Scotland within the EU single market, advocate “Scotland’s interests” during the Brexit process, and launch a ‘national survey’ over the next 90 days on independence.

Opposition leaders in the Labour and Liberal Democrats parties shot down the discussion on independence, claiming the SNP should focus on devolved issues.

The opposition parties have claimed that independence would compound the economic uncertainty from Brexit, due to the scale of the deficit in the recent Government Expenditure and Revenue Scotland (Gers) figures.

In response, the SNP have set up a growth commission – chaired by ex-MSP Andrew Wilson, to consider the deficit issue and future policy on Scotland’s currency.