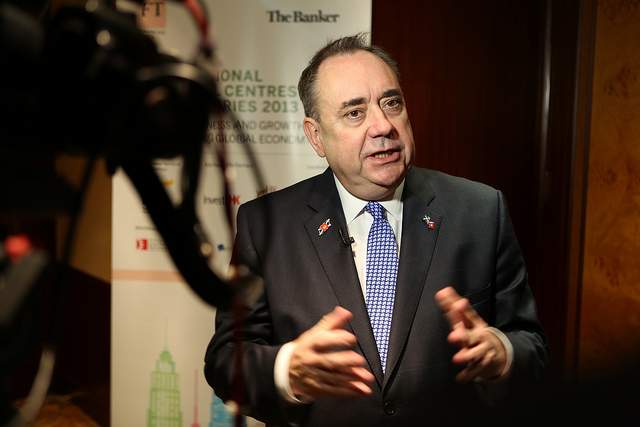 As the former first minister challenges Scottish Government procedure in court, Sturgeon calls for the privacy of those who made complaints against him to be respected.

FIRST MINISTER NICOLA STURGEON has stated that allegations of sexual misconduct against her predecessor Alex Salmond cannot be “swept under the carpet” and emphasised the need to ensure “fair and due process”.

Sturgeon’s public statement on the matter follows reports on the evening of 24 August by the Daily Record newspaper, which revealed that two individuals had made complaints against Salmond concerning allegations dating back to December 2013, during his tenure as first minister.

According to the Daily Record, Salmond has been reported to police over claims that he sexually assaulted two staff members at Bute House, the first minister’s official Edinburgh residence.

Since the revelation, Salmond has strongly denied the allegations, while Police Scotland have told press that it was “not going to comment on whether an inquiry is ongoing”.

In a statement published on Twitter today, Sturgeon confirmed that she had been aware of the accusations “for some time”, and that she initially became aware of them from Salmond. Despite this, she writes, “I have had no role in the process, and to have referred to it before now would have compromised the integrity of the internal investigation which I was not prepared to do.”

Salmond confirmed on Thursday that he was pursuing legal action against Leslie Evans, the permanent secretary of the Scottish Government, over her handling of the claims against him.

“However, this focus on process cannot deflect from the fact that complaints were made that could not be ignored or swept under the carpet.”

Sturgeon went on to emphasise her past statements on matters of harassment and misconduct, saying: “I have been clear on many occasions that all organisations and workplaces must make it possible for people to come forward to report concerns and have confidence that they will be treated seriously. For that principle to mean anything it cannot be applied selectively. It must be applied without fear or favour, regardless of the identity, seniority or political allegiance of the person involved.”

Sturgeon acknowledged that her relationship with Salmond, whom she has worked with for the bulk of her political career, “makes this an extremely difficult situation for me to come to terms with. I am also acutely aware how upsetting this will be for my party.

“However, the overriding priority must be to ensure fair and due process. I would also ask that the privacy of those who have complained be respected.”

“I have been clear on many occasions that all organisations and workplaces must make it possible for people to come forward to report concerns and have confidence that they will be treated seriously.” First Minister Nicola Sturgeon

In his own statement released yesterday, Salmond said that he refuted all of the allegations against him, without specifying what the claims specifically entailed. Nevertheless, he described “some” of these claims as “patently ridiculous.”

Salmond writes that the permanent secretary had chosen “to deny me contact with any current civil servant, many of whom wished to give evidence on my behalf and access to documentation to allow me to properly challenge the complaints.”

Regarding the Judicial Review he launched yesterday against the permanent secretary in the Court of Session, Salmond states that if he loses, “then I will have to answer to the complaints both comprehensively and publicly. Until then I am bound to say nothing which would impinge upon the Court proceedings.”

Salmond’s statement also confirmed that his submissions to the Judicial Review have also asked that the identity of the individuals behind the complaints be protected.