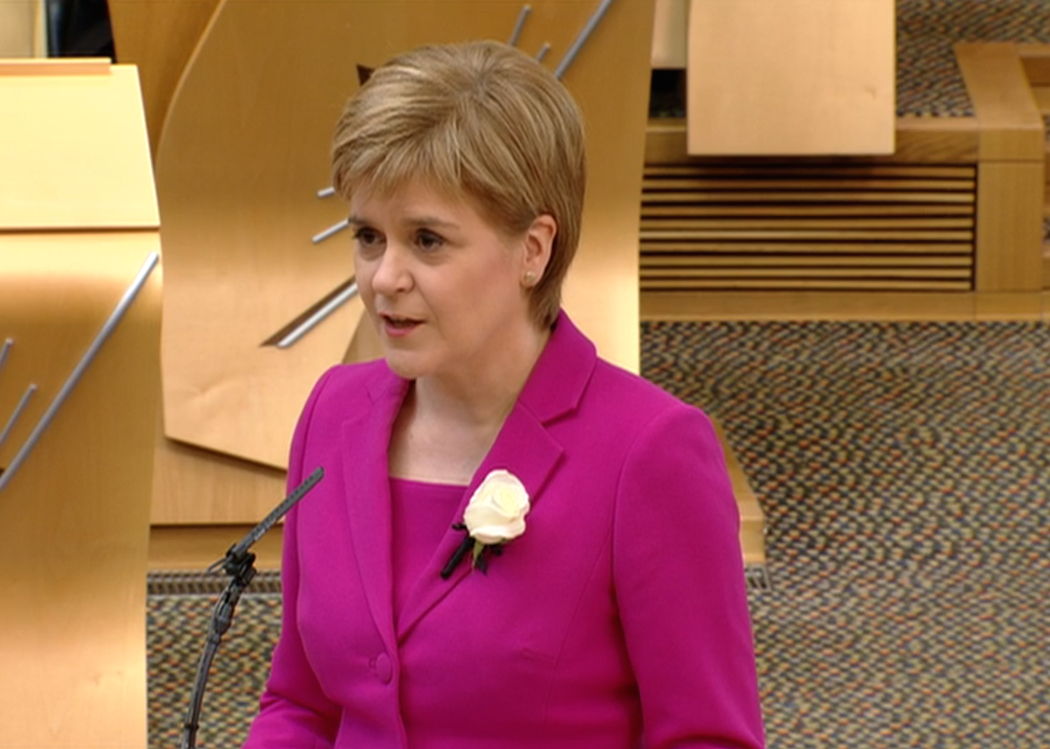 All MSPs are forced to swear allegiance to Mrs Windsor, the Queen, to sit in parliament

FIRST MINISTER Nicola Sturgeon has asserted her party’s “loyalty” to the people of Scotland on the day MSPs are required by law to swear allegiance to Mrs Windsor, the Queen, and any of her successors as unelected head of state.

Sturgeon, speaking on behalf of her party’s 63 MSPs, was the first to take the legal oath or affirmation, which states: “I will be faithful and bear true allegiance to her majesty Queen Elizabeth, her heirs and successors, according to law.”

Party tradition dictates that the leader of the SNP, prior to the royal oath, emphasises the importance of popular sovereignty – the belief that the democratic will of the people is the highest power in the nation.

Addressing the chamber on its first session in the new parliament, Sturgeon – before taking the legal affirmation – said: “The Scottish National Party pledges loyalty the people of Scotland, in line with the Scottish constitutional tradition of the sovereignty of the people.”

The idea that the people are sovereign clashes with sovereignty (the highest conception of national power) being held in the crown in parliament – which is the tradition in the palace of Westminster.

A popular sovereignty view of Scottish history – which some link back to the declaration of Arbroath – asserts that rulers, including monarchs, are legitimate primarily due to the consent of the people.

The swearing in ceremony, which included dozens of new MSPs, is controversial for forcing republican politicians to contradict their principles to take office.

Harvie said: “On behalf of the Scottish Green party and our MSPs, I would like to reaffirm that our priority will always be to serve the people of Scotland, who are sovereign. And that we support the principle of an elected head of state.”

Previously socialist MSPs like Rosie Kane and Colin Fox protested during the ceremony. Kane famously wrote: “My oath is to the people” on her hand as she swore allegiance. Fox was lightly reprimanded for singing ‘A man’s a man’, Robert Burns’ egalitarian anthem, when asked to take the oath.

Labour MSP Neil Findlay added his reservations before taking the oath. He said: “Before taking the oath I state that I believe that the people of Scotland should be citizens not subjects, and that I hold firm that my allegiance should first and foremost be to them.”

Anonymous polling of MSPs in the last parliament by The Herald found that a majority supported a Scottish or British republic. The SNP previously supported a referendum on the monarchy, if Scotland ever voted for independence. However, this position was put on the back burner for discussion after any pro-independence vote.

Today [Thursday 12 May] is the first day of parliament since the fifth Scottish national election.

The Scottish Parliament will later elect a new presiding officer. New week a first minister, expected to be Sturgeon, will be elected and a new government administration formed.