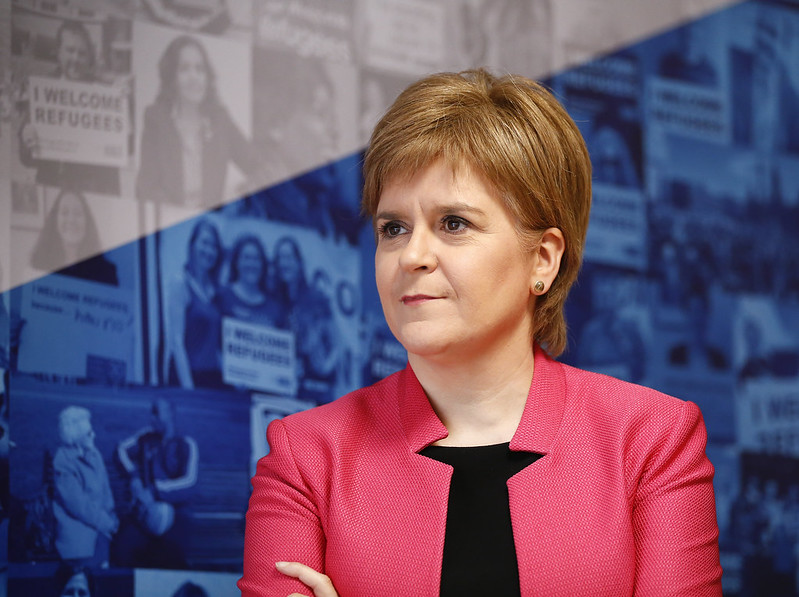 The first minister said a referendum in 2020 was her preference, but conceded it may not happen until after the 2021 Scottish Parliament elections

INDEPENDENCE will only be secured through a “legal and legitimate” referendum with no shortcuts or “clever wheezes”, Nicola Sturgeon has said in a speech to mark the UK’s withdrawal from the EU.

Whilst the first minister stressed that although a referendum this year was possible, she conceded it may not happen until after the 2021 Holyrood elections.

Speaking to an audience of SNP members and the press hours before the UK officially cuts ties with the EU, Sturgeon said Brexit day was a “pivotal moment” for the UK and Scotland.

“Tonight, the UK will leave the European Union. That will be a moment of real and profound sadness for many of us across the UK.

“And here in Scotland, given that it is happening against the will of the vast majority of us, that sadness will be tinged with anger.”

However, the SNP leader insisted she would not dwell on that anger, and instead wanted to focus on something more important – “hope”.

In a message to the wider independence movement, she warned against allowing the Conservatives to turn a “positive, persuasive and invigorating discussion” about Scotland’s future into an “arid and bitter argument” about the process and procedure surrounding a second referendum.

Urging independence supporters to stay the course, she told the audience: “For me to pretend that there are shortcuts or clever wheezes that can magically overcome the obstacles we face might make my life easier in the short term – but it would do a long term disservice to the independence cause that I, like so many, have dedicated my life to.

“My job is to lead us down a credible path that can deliver independence. And that is what I am absolutely determined to do.

“To achieve independence, a referendum, whenever it happens – whether it is this year as I want, or after the next Scottish election – must be legal and legitimate. That is a simple fact.”

Insisting the legality of a referendum must be “beyond doubt”, Sturgeon appeared specifically addressed suggestions over a so-called “consultative referendum” which would have no binding effect on either government and could lead Scotland into a Catalonia-type situation.

Even if such a move was ruled legal by a court, and within the competence of the Scottish Parliament, the first minister warned that the outcome could still be uncertain with the UK possibly denying independence even after a Yes vote.

Sturgeon said: “It could move us forward – but equally it could set us back. So my judgment at this stage is that we should use our energies differently.

“We must focus firmly on building and winning the political case for independence.

“That is necessary to win a referendum. But it is also how we will secure one.”

Setting out a series of steps the Scottish Government and the SNP would be undertaking, Sturgeon announced plans to set up a new Constitutional Convention of MPs, MSPs, former MEPs and council leader.

The SNP will also be publishing a series of ‘New Scotland’ papers detailing how to set up an independent Scotland; the party’s campaigning budget will also be doubled to pay for independence campaign material, local newspaper adverts and a campaign video targeted at undecided voters.

“There are many people who voted No in 2014 now thinking about independence differently in light of Brexit.

“We must show that we understand the complexity of the issues they grapple with and that for many emotions will be mixed.

“So we must make our case with passion but also with patience and respect. And we must never stoop to the level of our political opponents,” Nicola Sturgeon said.

“Or as the great Nelson Mandela said – ‘It always seems impossible until it is done’.

“In Scotland I believe we are on the cusp of such a moment.”