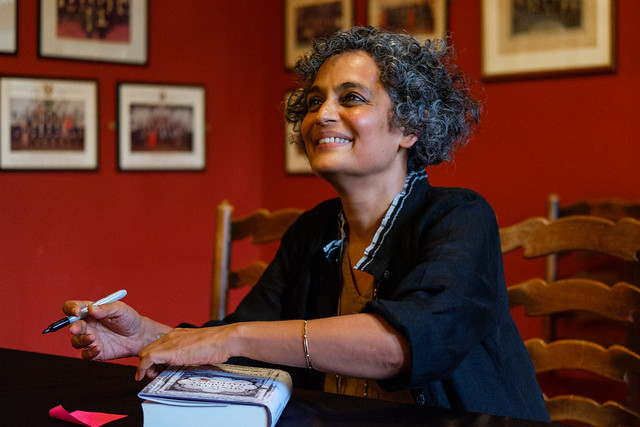 Roy, who won the Man Booker Prize for fictional book The God of Small Things in 1997, has written thousands of non-fiction essays which has been brought together in a collection published this month, My Seditious Heart, which runs over 1,000 pages long.

The interview on 19 August will be the headline of the festival, which runs from 10-26 August and will also include the launch of an update to Lesley Riddoch’s Blossom, a new novel by former MP Chris Mullin following up his bestselling classic A Very British Coup and a discussion between former Prime Minister Gordon Brown and economist Branko Milanovic as he launches his new book Capitalism, Alone.

Very excited to be interviewing Arundhati Roy at this summer’s @edbookfest – I’m a huge admirer of both her novels and now looking forward to this newly published collection of her non fiction writing. pic.twitter.com/mzq0HivV8f

The announcement comes just one week after the re-election of Hindu nationalist Narendra Modi as Indian Prime Minister, who Roy has been an arch-critic of. Roy once described Modi’s first term as a “fascist regime”.

She said in an interview with DW News: “There are thousands of people in jails across the country; poor and disadvantaged people fighting for their homes, for their lands, for their dignity. These people have been accused of sedition and worse, languishing without trial in crowded prisons.

“We are up against a regime that its own police calls fascist. In the India of today, it is a crime to belong to a minority. To be poor is a crime. To defend the poor is to plot to overthrow the government.”

Following Modi’s re-election, Roy questioned in an interview with the New Republic whether the election was fair, due to what she described as the over-weening financial fire-power of Modi’s campaign.

READ MORE: Analysis: Why the largest strike in history in India is a problem for the British state

She said: “That money bought them tens of thousands of IT experts, data analysts, social media activists who ran thousands of Whatsapp groups with carefully directed propaganda—tailored and tweaked for every section, region, caste, and class, every voting booth in every constituency.

“That kind of money can sell anything it decides to sell—in this case a product so toxic, it created an epidemic. Not a single thing of importance, not climate change, not the looming economic crisis, not health, not education was a part of the campaign. Nothing except toxic, medieval stupidity on an epic scale. How can we treat this as a fair election?”

Roy’s history of radical political activism and writing is a long one and spans many issues. She has been charged with sedition for supporting the independence of Kashmir from India; was imprisoned for one day and fined for her opposition to the Narmada Dam Project; was a leading spokesperson of the anti-globalisation movement in the early 2000’s; a vehement critic of US imperialism, especially the wars in Iraq and Afghanistan; backed a boycott of Israeli political and cultural institutions; has defended the Naxalite-Maoist guerrilla insurgency from Indian government attacks; has campaigned against India’s nuclear weapons; and has been a consistent advocate for environmental and human rights.

In 2014 Roy authored “Capitalism: A Ghost Story”, a savage critique of Indian and global capitalism, and described capitalism in an interview with Democracy Now last month as “a form of religion that will brook no questioning”, preventing solutions to climate change and inequality.

“This sort of ‘progress’ is a kind of church now. It is not amenable to reason,” she added.