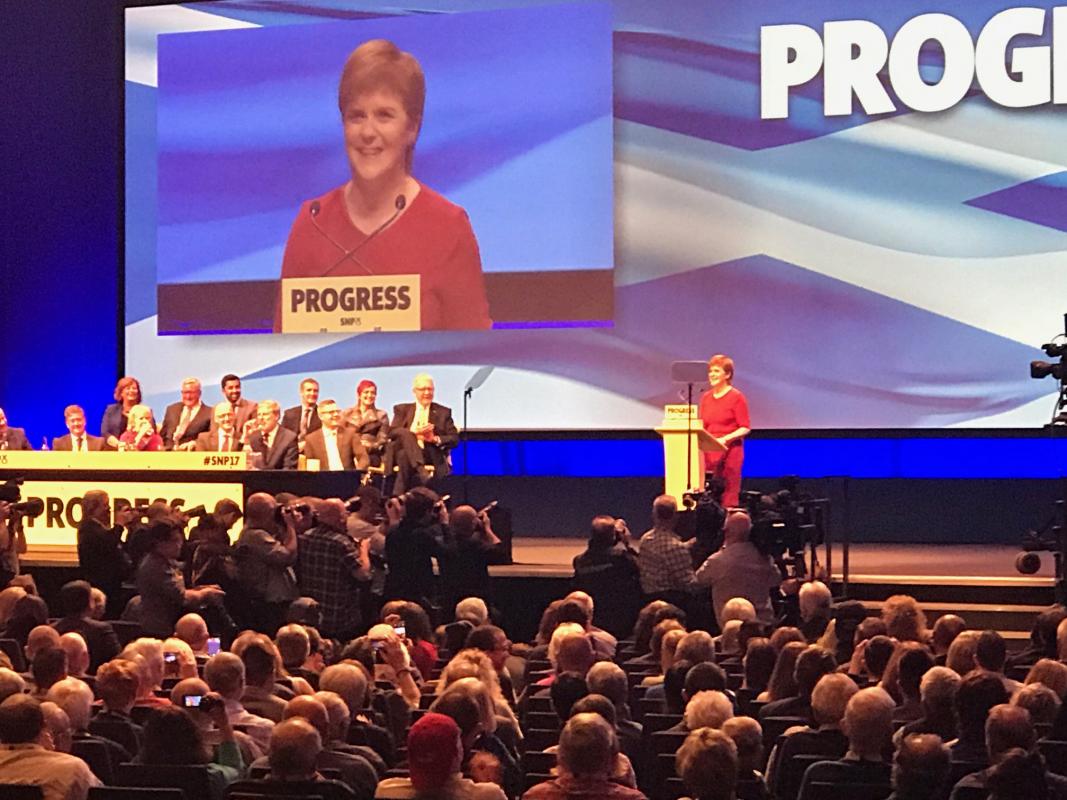 FIRST MINISTER Nicola Sturgeon closed the SNP’s 2017 Autumn conference by announcing a raft of new pledges and policies, including a new publicly-owned, non-profit energy company, a firm date on delivering action against period poverty, doubling investment in free childcare and a confirmation that the Scottish Government will meet the cost for EU nationals working in our public services.

Regarding a second independence referendum, Sturgeon gave no firm commitment to any likely date for another vote, despite deputy leader Angus Robertson’s statement in the speech preceding hers that “there will also be a referendum on Scottish independence,” which was met with wild cheers from the conference audience.

Sturgeon did however reiterate the SNP’s commitment to making the case for independence. Sturgeon also appeared to rise to the challenge of political opponents to use the Scottish Parliament’s “limited” tax powers to combat Tory austerity measures.

Below, CommonSpace provides a summary of the key points from Sturgeon’s speech and what this means for the SNP and the Scottish Government going forward.

In perhaps the biggest solid policy announcement of her speech, Sturgeon revealed that the Scottish Government would create a new publicly funded, non-profit energy company for Scotland, an idea first floated in the SNP’s most recent manifesto.

“The idea, at its heart, is simple,” said Sturgeon. “Energy would be bought wholesale or generated here in Scotland – renewable, of course – and sold to customers as close to cost price as possible.

“No shareholders to worry about. No corporate bonuses to consider.

“It would give people – particularly those on low incomes – more choice and the option of a supplier whose only job is to secure the lowest price for consumers.”

This echoes calls from the energy sector expert Professor Andrew Cumbers, who in a 2013 Jimmy Reid Foundation paper called for a nationalised energy company in an independent Scotland that would help reduce Scotland’s reliance on North Sea oil and gas.

Land reform has long been a priority for the Scottish Government and certain sections of the SNP, despite arguments from some land reform campaigners that it is not going far enough in addressing the enormous imbalance of land ownership in Scotland.

In her conference speech, Sturgeon was able to announce one of the biggest early developments of Scottish land reform by announcing that the Scottish Government “have today granted permission to the people of Ulva to bring their island into community ownership”.

This follows in the footsteps of the people of Eigg, who exactly 20 years ago bought their island from its owner, beginning, in Sturgeon’s words, “Scotland’s modern journey of land reform”.

Sturgeon took pains to reassure public sector workers that the Scottish Government would fulfil its pledge to lift the one per cent public sector pay cap. However, Sturgeon did not address widespread criticism, particularly from the PCS trade union, that the effects of this would not be felt until next year.

“The fact that real wages have stagnated or fallen heightens the sense of unfairness,” Sturgeon said. “So to our nurses, teachers, police officers, firefighters – to all of our dedicated public sector workers – let me reiterate this commitment today. Next year, we will seek pay deals that are affordable but also fair.

“The one per cent pay cap will be lifted. We are the only government in the UK to make this unequivocal commitment.”

The Scottish Government has already pledged to combat the effects of ‘period poverty’, under which low-income women are often forced to choose between food for themselves or their families and tampons.

Sturgeon gave further details of Scottish Government efforts to end period poverty, saying: “I can announce today that this ground-breaking commitment to tackle the gender injustice of period poverty will be delivered from the start of the new academic year next August.”

Sturgeon refused to be drawn into further speculation about the possible date for another independence referendum, focusing instead on the need for the SNP to continue making the case for independence, seemingly refuting early reports in the media that independence would be off the conference agenda.

She also appeared to address those elements within the party pressing for another plebiscite before the Brexit process is complete by saying: “To all of you here in this hall and across our country who are impatient for change, let me say this: We may not yet know exactly when the choice will be made. But we can, we must, and we will always make the case for independence.

“With the UK Government so engulfed in chaos and taking the country down a path of self-imposed decline, the need to do so has never been greater. So let us make our case with conviction. Let us address concerns head on.

“And above all, let us inspire confidence in our fellow citizens that the way things are now is not the way they must always be.”

Regarding the violence and repression imposed by the Spanish Government and Spanish authorities upon the 1 October Catalan independence referendum, which has spurred solidarity actions throughout the Scottish independence movement and been a frequent talking point at the SNP’s Autumn conference, Sturgeon attempted to reconcile her earlier criticism of the Spanish Government with the SNP’s broadly pro-European position, arguing that the EU should have condemned the violence that greeted Catalonia’s democratically expressed will.

“We do want Scotland to stay at the heart of Europe,” said Sturgeon. “But that does not mean we think the EU is perfect. Sometimes it fails to live up to its founding values of human dignity, freedom, democracy and equality.

“When the people of Catalonia – EU citizens – were violently attacked by police just for trying to vote, the EU should have spoken up, loudly, to condemn it.

“Friends, in Catalonia, I hope dialogue will replace confrontation. It is time for the Spanish government to sit down with the government of Catalonia.”

On Brexit, Sturgeon remained consistent with the message she has spent the past year articulating, particularly in concert with the Welsh Government, regarding powers returning from the EU to Westminster in the aftermath of Brexit.

“The EU Withdrawal Bill gives Westminster control over Scottish agriculture, fishing, the environment, GM crops, fracking licensing and a whole host of other devolved powers,” Sturgeon said. “It is a blatant power grab.

“Conference, we will not allow a Tory government to undermine devolution. Our message to the Westminster Tories is clear: Hands off Scotland’s parliament.”

Capping a continuing theme of the SNP’s Autumn conference, Sturgeon argued against the widespread narrative amongst opposition parties and some sections of the media since the 2017 election that the SNP is in decline.

While she acknowledged SNP losses in the June General Election, she countered by saying: “The SNP is polling at a higher level today than we were at this point in the honeymoon days after our 2007 win or our landslide in 2011.

Taking the fight to her opponents, Sturgeon mocked the in-fighting of Scottish Labour’s ongoing leadership election – another common theme of conference speakers – and challenged recent scandals within the Scottish Conservatives, saying: “The racism, misogyny and sectarianism within their [the Tories’] ranks has been on full, ugly display.

“The disgusting views that have been expressed by too many Tory politicians have no place in public life.

“It’s time Ruth Davidson found some backbone and kicked the racists and bigots out of her party.”

Sturgeon gave a fulsome argument in favour of the Scottish Government’s Nordic-style ‘baby box’ policy, announced last year, aimed at reducing inequality among those with children. The baby box will be provided free to new mothers, and include clothes, nappies, toys and a built-in mattress which can be used as a cot.

Sturgeon told the conference: “The baby box really is a beautiful thing. Not just for all the practical help it provides or even the contact it promotes between pregnant mothers and midwives.

“It is beautiful because of what it says.”

In a new announcement, Sturgeon also declared that all young care leavers will be exempt from council tax, in addition to already announced measures for care leavers such as grants and guaranteed places for those with the grades to attend university.

Arguing that “the greatest responsibility of all that we owe to the next generation is to protect the planet”, Sturgeon pointed out that Scotland met world-leading climate change targets, and announced that next year the Scottish Government would go farther.

“A new Climate Change Bill will set even more ambitious targets,” Sturgeon said. “We will meet our obligations under the Paris Accord.”

Repeating pledges made in the 2017-18 Programme for Government, described by some environmentalists as the greenest ever seen by the Scottish Parliament, she brought up the Scottish Government’s commitment to eliminating petrol and diesel vehicles in Scotland by 2032 and to setting up Low Emissions Zones in Scotland’s four biggest cities, and announced that the first of these would be located in the city of Glasgow.

Echoing SNP MP Mhairi Black’s defiant argument earlier on Tuesday that “Scotland needs and wants immigration,” Sturgeon attacked the UK Government’s policy on immigration as an appeasement to the politics of UKIP and demanded that immigration be devolved to Holyrood.

“Immigration is not an easy subject for politicians,” Sturgeon said. “But we have a duty to be straight with people.”

“If we accept the Tories’ arbitrary target the number of people working and paying taxes here will fall, that means fewer people to generate the tax revenues we need to pay for our public services and support our older citizens.

“An immigration policy designed to appease UKIP must go. A Scottish policy that meets Scotland’s needs and lives up to Scotland’s values must take its place.

“It is time to give control of immigration policy to our own Scottish Parliament.”

The SNP has faced frequent criticism from political opponents, particularly Scottish Labour, that while it demands further powers for the Scottish Parliament, it has been hesitant to use the parliament’s existing powers while in Government.

While no specific policy was announced on tax, Sturgeon appeared to rise to this challenge, telling the conference: “A fair society must be paid for.

“Decisions taken at Westminster still determine our overall spending power. Revenue from income tax makes up just one third of our budget.

“But the prospect of more Tory austerity and the impact of Brexit pose growing threats to our public services and the most vulnerable in our society.

“That means it is right to consider how our limited tax powers might help us protect what we value most.

“As we do so, this question will be centre stage: what kind of country do we want to be?”