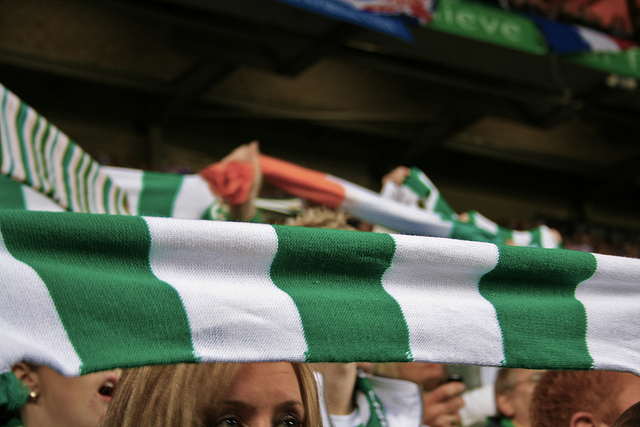 SCOTTISH WOMEN’S AID HAS again made clear its position that any interpretation of a causal link between football and violence against women elides the wider issues involved and relies upon data which may be misleading.

Dr. Marsha Scott, Chief Executive of Scottish Women’s Aid spoke to CommonSpace about the issue ahead of the Scottish Parliament Justice Committee’s latest meeting on Tuesday on the bill which would repeal the Offensive Behaviour at Football and Threatening Communications (Scotland) Act 2012.

The committee will hear evidence from a range of organisations which have submitted responses to the proposed repeal of the controversial legislation.

Scottish Women’s Aid has not submitted to the consultation, but on the question of how the current law might offer protection against violence or abuse aimed at women, Scott said that the only part of the Act of particular relevance was the – often overlooked – “threatening communications” section.

This section prohibits threats or incitement of serious violence, not confined to football settings. Scott pointed out that the application of this section appears to be woefully limited, with only six charges under this section referred to the court for prosecution in 2016-17, seven in 2015-16, and four in 2014-15.

“We haven’t seen any evidence that tells us football is a causal factor in violence against women, in any way.” Dr. Marsha Scott, Scottish Women’s Aid

“Our position is that there are few avenues for women experiencing abuse online or via text to seek and receive protection,” she said.

“Although clearly not being used, we are keen to find out why not and to improve on this section and are not supportive of having it scrapped.”

With regards to the aspects of the law linked more specifically to football contexts, Scott said: “We would obviously support any mechanism which gives a social message that violence isn’t acceptable in any context.”

However, she said: “We haven’t seen any evidence that tells us football is a causal factor in violence against women, in any way.

“The data we have seen around football games, and in particular Old Firm games, reflects policing activity and has led people to draw inaccurate conclusions.”

Football, she said, along with drinking, may be “used as an excuse” for violence, but she said this amounted to a form of “cultural permission giving”, which to some extent overlooks violence committed around football.

Writing in The Sunday Herald last year, Scott explained this position in detail, and said that Scottish Women’s Aid had “significant anxiety” around the potential conflation of domestic abuse and football culture.

“Domestic abuse is a cause and consequence of patriarchal attitudes, gender stereotypes, male entitlement and privilege, and women’s inequality.

“We do women and children experiencing domestic abuse no favours when we imply any other cause.”

The effectiveness of the Offensive Behaviour Act itself in tackling not only sectarianism but other forms of prejudice and abuse – be that against women, LGBT people, black and ethnic minorities, or disabled people – has been the subject of considerable debate.

LGBT organisations Equality Network and Stonewall Scotland have both submitted to the consultation to express concern about an outright repeal of the Act without a clear replacement, in light of the prevalence of homophobia and transphobia in sport and online, but both organisations support a detailed review and possible reform of the legislation.

CRER (Campaign for Racial Equality and Rights) submitted in support of the repeal, on the basis that the Act “creates confusion and double-standards within hate crime policy and legislation”. BEMIS (Black and Ethnic Minorities Infrastructure in Scotland) also support the repeal, saying the Act “has had a negligible to non-existent impact on race hate crime”.

The only women’s organisation to respond directly to the consultation on the repeal was the Scottish Women’s Convention (SWC). SWC oppose the repeal on the grounds that the Act offers protection to women who report feeling fear and alarm as a result of the culture of singing or shouting abusive language, and who experience violence in or around football settings.

SWC states in its submission: “The SWC gives full support to any legislation that will bolster protection of women within Scotland. Prior to the 2012 Act, football-specific behaviour was not captured within legislation and the fear and alarm that can be caused as a result of this.

“Women are often the victims of sectarianism and, as a result, often avoid public spaces on match day due to fear. This particular type of behaviour is often linked to violence against women and can deepen the inequality between the sexes.

“The OBFA will not prevent what happened to me from happening to other women, no matter what colour of scarf they wear.” Anonymous source

“Women have reported being groped, physically assaulted or even threatened with rape all because they support a particular team.

“Police, football clubs and football fans should not condone such behaviour and support women who are victims.”

That being said, SWC’s submission is clear that more needs to be done to effectively address both sectarianism and sexist abuse.

CommonSpace heard from a source who wished to remain anonymous but who felt that the Offensive Behaviour at Football Act would not address the issues highlighted by the Scottish Women’s Convention.

She said: “I want to respond to the submission from the SWC. I am a female football fan who has attended matches across Scotland but most often in Glasgow. I was assaulted outside a football ground by a football fan but I do not support the OBFA.

“The Act does nothing to prevent male violence against women. The only thing the OBFA achieves is further division and the criminalisation of working class communities.

“Violence against women around football must be condemned, as SWC suggest, but the OBFA is not the vehicle for this. The OBFA does nothing for women who are assaulted or groped by men, regardless of what team either of them support.

“The OBFA does nothing for women – whatever their religious identity – who experience domestic abuse after football games. The OBFA will not prevent what happened to me from happening to other women, no matter what colour of scarf they wear.”

The Justice Committee will continue to take evidence on the proposed repeal bill later this month.