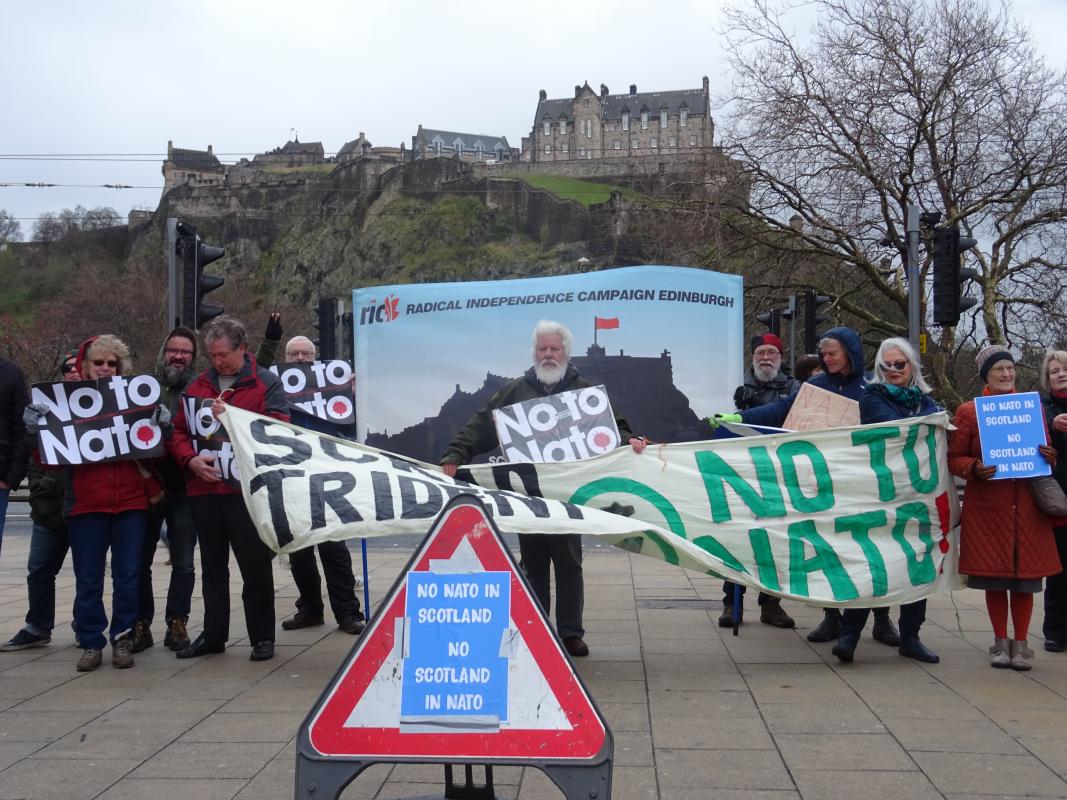 The UN voted for a treaty to ban nuclear weapons in 2017, but it was boycotted by the NATO nuclear powers, including the UK

PEACE groups protested in Edinburgh and Glasgow on Thursday [4 April] to mark the 70th anniversary of the North Atlantic Treaty Organisation (NATO), and said that the western military alliance “represents a major threat to peace in our world”.

The demonstrations come as NATO foreign ministers gathered in Washington to celebrate the anniversary, with NATO Secretary General Jens Stoltenberg defending its record.

“Its reach is vast, and it has stood the test of time – because we have united around our core commitment to protect and defend one another,” Stoltenberg said.

NATO was first established during the Cold War to act as a western bulwark against the Soviet Union.

While established as a defensive alliance, in the post-Cold War era it has increasingly taken on offensive operations, including well beyond the North Atlantic, most controversially backing US-led attacks on Afghanistan in 2001 and Libya in 2011.

In recent years focus has returned towards Russia, following the country’s defeat of Georgia in 2008, annexation of Crimea in 2014 and military intervention in Syria in support of President Bashar Al-Assad since 2015.

Since Donald Trump’s election to the US presidency in 2016, the US has demanded NATO allies increase their Defence spending to meet the NATO target of two per cent of GDP, which only eight of 29 member states currently meet.

The alliance controversially has a “nuclear strike first” policy, and if any of its members come under attack it is the requirement of all members to defend it. Turkey, a country which has been condemned for its human rights abuses and military interventions against Kurds in Syria, is a member of NATO.

Arthur West, chair of Scottish Campaign for Nuclear Disarmament, said ahead of the protests: ”Apart from being a nuclear weapons based organisation – the US is also using NATO to pressurise member countries to significantly increase their overall defence spending. Frankly, NATO in its current form represents a major threat to peace in our world.”

On the one hand opposition to Nato’s use of Scotland for military training, which last occurred in 2015, and the presence of the Faslane nuclear base, making up part of Nato’s US-controlled nuclear arsenal.

On the other hand, the SNP’s policy shift in 2012 towards support for NATO membership in an independent Scotland, a position which polarised the party at the time but has received little scrutiny since.

International Campaign to Abolish Nuclear Weapons (ICAN) Scottish liaison and Scottish CND vice-chair Janet Fenton said the protests against NATO on Thursday was international, and that the anti-nukes movement had received renewed impetus following a July 2017 UN vote in favour of a ban treaty on nuclear weapons, a vote which the nine nuclear powers – including the UK – boycotted.

Fenton said: ”The International Campaign is protesting in cities across Europe as well as at Washington DC. The US Government is aware of the changing discourse that is arising from the new Treaty that makes all nuclear weapons activity or alliance illegal for those who sign up to it. We know this from the pressure they are putting NATO countries under, in an effort to stop them from signing it.

“NATO should, for a start, change its nuclear policy. Peace people would like to see it halted altogether in its expanding its territory and escalating global tensions, and an independent Scotland should not make its job of standing up to the nuclear armed states any harder by having anything to do with it.”

Speaking at the 70th anniversary celebrations in Washington, US Secretary of State Mike Pompeo called on NATO to adapt to “emerging threats”, including Chinese “strategic competition”.

“We must adapt our alliance to confront emerging threats … whether that’s Russian aggression, uncontrolled migration, cyber attacks, threats to energy security, Chinese strategic competition, including technology and 5G, and many other issues,” Pompeo was reported in Reuters as saying. 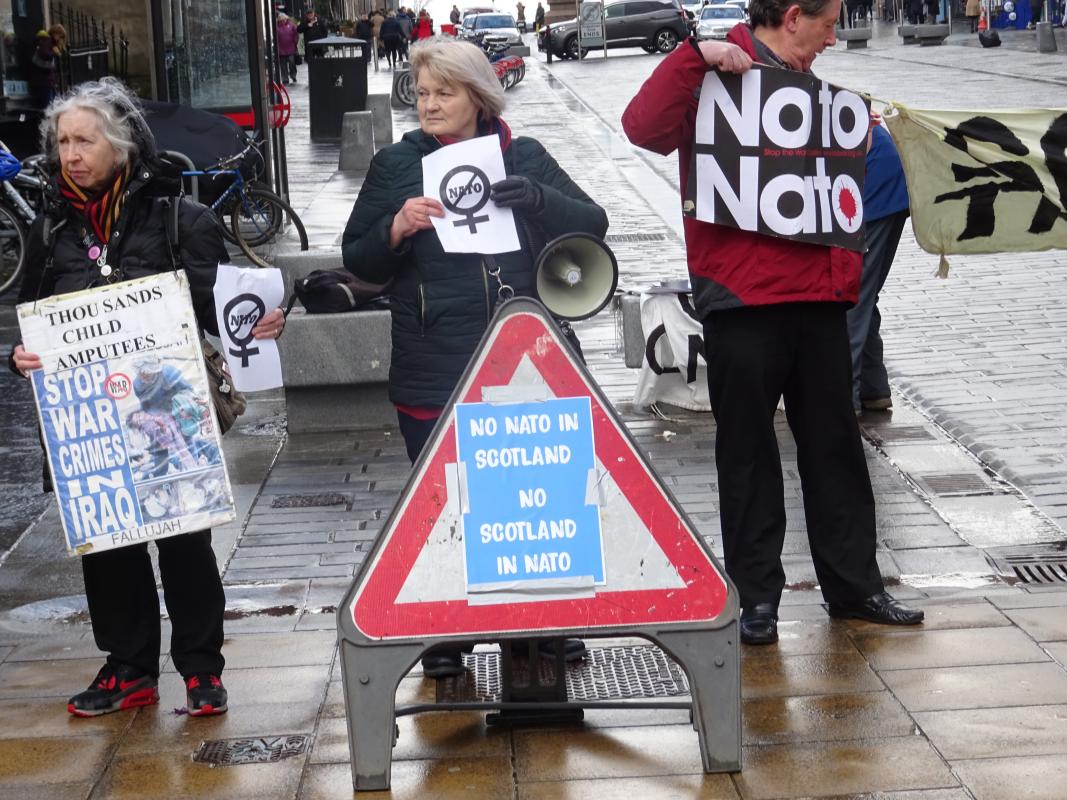 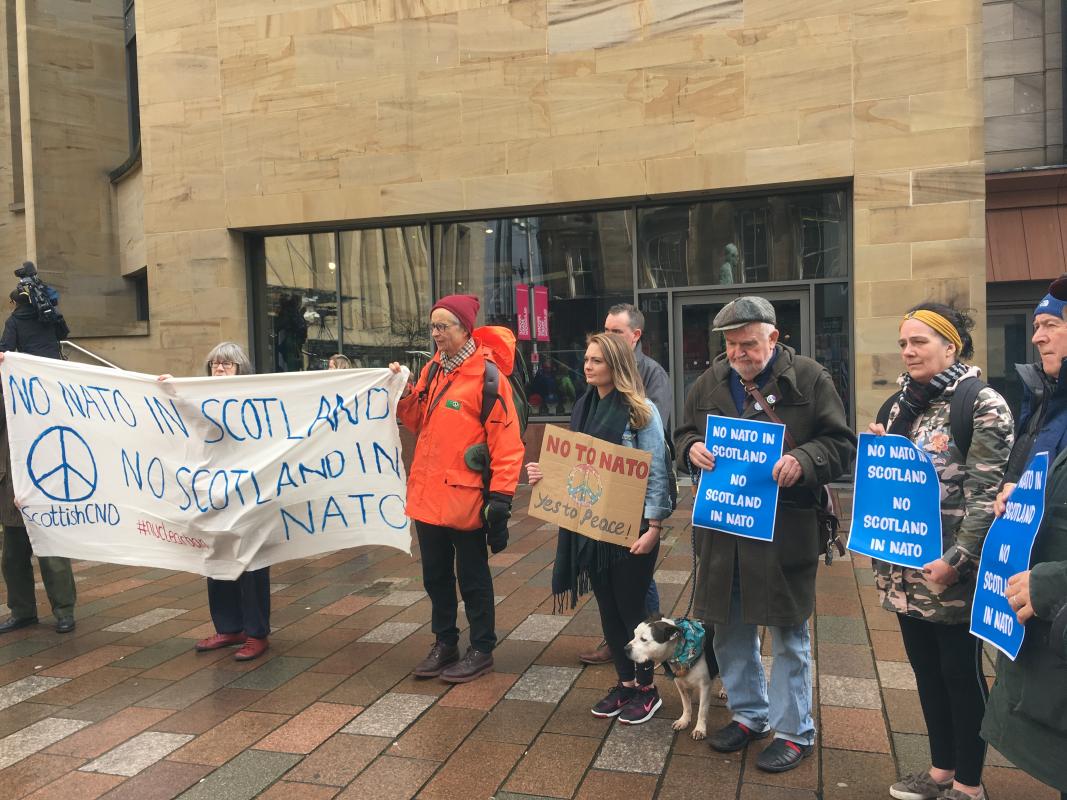