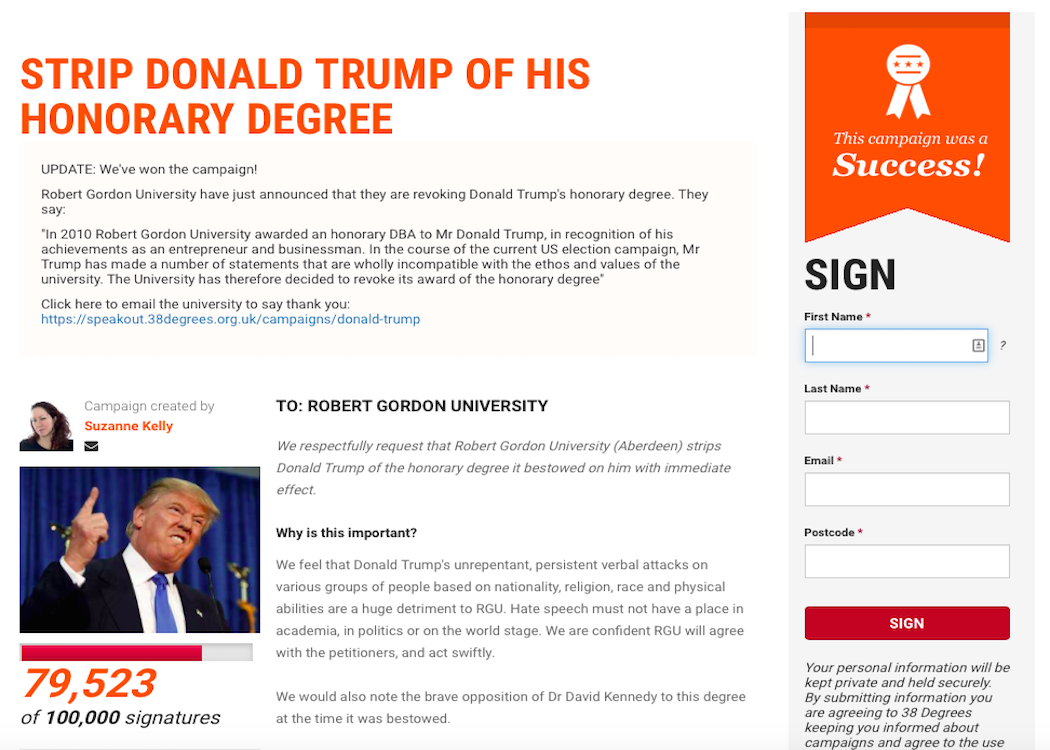 COMMENTS made recently by presidential candidate and millionaire Donald Trump have prompted online action leading to him being stripped of his honorary degree at a Scottish university.

Over 70,000 signed an online petition to strip Trump of his degree, on campaign site 38 Degrees, in the space of a day. Thousands more tweeted and emailed the principal of Robert Gordon University which awarded the degree.

Commenting on Twitter, a spokesman for the Aberdeen-based university said: “In 2010 Robert Gordon University awarded an honorary DBA to Mr Donald Trump, in recognition of his achievements as an entrepreneur and businessman.

“In the course of the current US election campaign, Mr Trump has made a number of statements that are wholly incompatible with the ethos and values of the university. The university has therefore decided to revoke its award of the honorary degree.”

The petition was started after Trump called for a “total and complete shutdown of Muslims entering the US”, including tourists. He added that many Muslims have “hatred” towards America.

Initiated by the activist Suzanne Kelly, the petition has continued to attract signatures. At time of publication to petition had garnered just under 80,000 signatures.

Kelly wrote in the petition text that Trump had engaged in “unrepentant, persistent verbal attacks on various groups” based on nationality, gender or race and argued “hate speech must not have a place in academia, politics or on the world stage.”

Trish Murray, Campaigner at 38 Degrees, said: “This is a great victory for people power. After 70,000 people signed the 38 Degrees petition, Robert Gordon University quickly realised that honouring Donald Trump was completely out of step with the feelings of the UK public.

“Honours like this legitimise hate speech. Britain has just sent a clear message to Donald Trump – we won’t stand by your hateful views.”

Kelly also noted in her petition text the “brave opposition of Dr David Kennedy to this degree at the time it was bestowed.”

Dr Kennedy, former principal of RGU, handed back his own honorary doctorate in 2010 in protest when the university first made the award to Trump. He said at the time: “I would not want to hold the award after Mr Trump has received his.”

The award honoured Mr Trump’s “business and entrepreneurship”, including “his investment in the North-East of Scotland”, the university said at the time. This referred to the PS1bn golf course and luxury hotel Trump was building on protected dune systems at Menie, on the Aberdeenshire coast.

In handing back his award Mr Kennedy called Trump’s actions at Menie “deplorable”; the Menie development was also the subject of several online petitions and also a documentary film, which showed evidence of harassment of local residents who refused to make way for the golf course. Trump’s lawyers attempted, in 2012, to prevent the BBC from screening Anthony Baxter’s feature-length film.

Following Trump’s recent comments Trump was also stripped of another honour in Scotland, as First Minister Nicola Sturgeon withdrew his membership of the GlobalScot business network, which was first bestowed on the businessman in 2006.

Another petition demanding that Trump is refused entry to the UK has reached 383,000 signatures at time of publication.