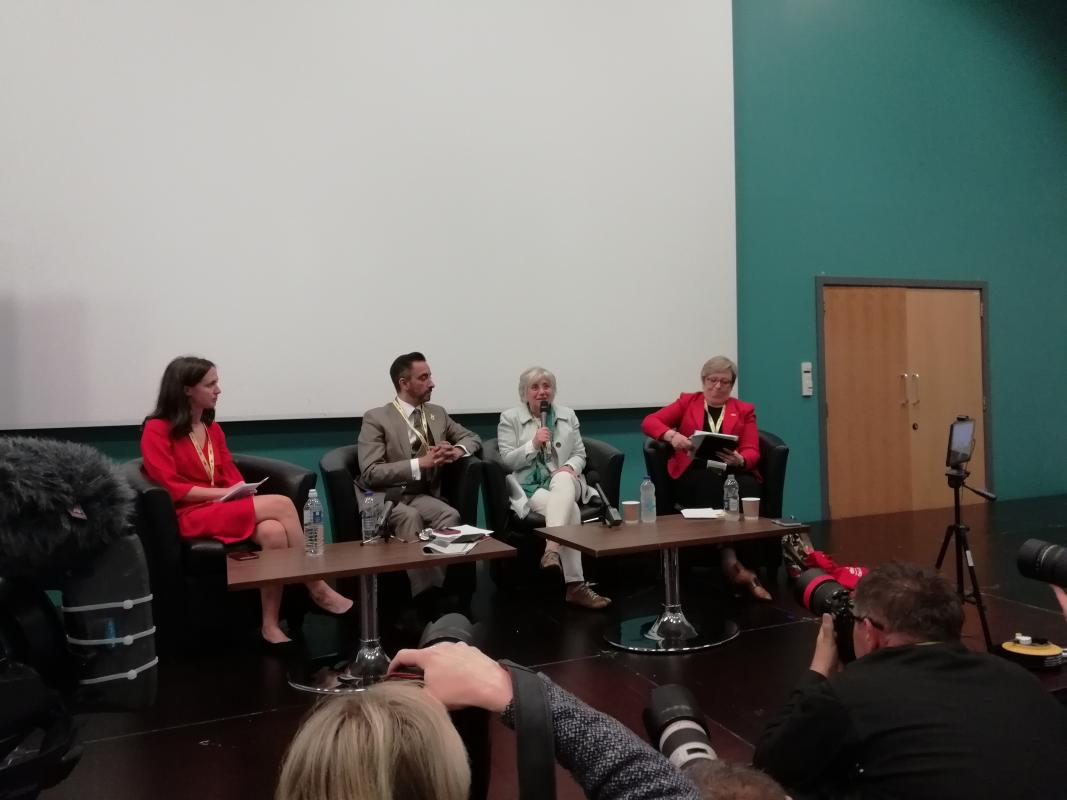 AN EMERGENCY RESOLUTION expressing the SNP’s solidarity for St Andrews academic Professor Clara Ponsati has been passed unopposed by the SNP at the Spring conference in Aberdeen.

Ponsati, the former Catalan education minister, is one of several Catalan political exiles around Europe currently battling extradition back to Spain under European Arrest Warrants, issued in response to their role in the Catalan independence referendum of October, 2017.

Seconding the resolution, her lawyer, the noted human rights advocate Aamer Anwar, told the conference to thunderous applause: “The SNP is more than just a political party – it has built a movement for independence which at its heart has always had the principles of justice, freedom and equality.

“And that is why, as internationalists, wherever injustice takes place, whether in Palestine or on the streets of Barcelona, we can never, ever be silent.”

Reiterating what has become the driving force behind his argument, articulated earlier today at a fringe conference meeting organised by the Young Scots for Independence, Anwar argued that the only guilt for the events surrounding the Catalan plebiscite lay with the Spanish authorities, and the government which dispatched them in an effort to suppress a vote which, Ponsati and Anwar argued today, broke no law, despite the ruling of the Spanish Constitutional Court.

“Shame on those who sided with the corrupt Spanish Government. How can you call it undemocratic for a people to vote?” Clara Ponsati lawyer Aamer Anwar

“On 1 October, the Spanish state was desperate to criminalise the Catalans’ aspiration to decide their own destiny,” Anwar said.

He echoed Ponsati’s defiant claim earlier in the day when he said: “Let me say this: no referendum can ever be illegal.”

Reiterating his belief that the legacy of Francoism persists within modern Spain, Anwar told the conference: “Never forget, that in 1939, the fascist Franco marched into Barcelona with his troops and unleashed a reign of terror over four decades. We must never see a return to those dark days.

“Let me say it clear to all those so-called silent democrats and all those so-called silent social justice warriors in Scotland: there is no point in standing in solidarity with the people of Barcelona last year, when terrorists attacked their freedoms on the streets of La Ramblas, yet now you close your eyes and ears when their freedoms and democratic institutions are under attack from the Spanish state. When half their government is put in prison, and the rest in exile.

Anwar continued: “Conference, there is a statue in Glasgow just two minutes from my office called La Pasionara – ‘no pasaran!’ That monument is dedicated to 534 Scottish volunteers of the International Brigade who left Scotland and died fighting against Franco and his fascists.

If Ponsati is extradited and convicted at the age of 61, she could potentially face a sentence of 33 years and die in a Madrid prison, Anwar said: “Silence is not an option for those on the side of justice.”

Speaking earlier alongside Anwar and SNP MP Joanna Cherry QC, who acted as an international election observer during the Catalan referendum, Ponsati said: “It’s amazing the support we are getting from the Scottish people, and we’re very grateful.

“The Catalan people have been fighting for their own self-determination very actively for the last ten years; the movement has picked up a lot in the past five years. All along, there was a demand for an agreement on a referendum. And the Spanish authorities have always chosen to ignore these demands.

“So, it was the duty of the Catalan parliament to organise that referendum. The voters had given us a mandate – we were obliged to do it. Besides, it’s not illegal; we’ve done nothing illegal.

“So, at the end of the day, yes, there is an article in the Spanish constitution that was approved many, many years ago, and has not been revisited, that says that Spain is a united, indivisible kingdom. But human rights and self-determination as a human right are founding elements of Spanish democracy.

“What is going on here is that Spanish nationalism, in their desperate defence of this sacred united, are prepared to sacrifice democracy.”