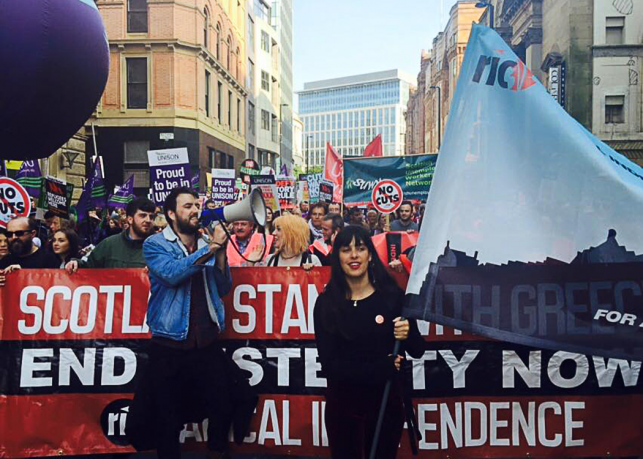 THE RADICAL INDEPENDENCE CAMPAIGN (Ric) will tackle key points of division within the Scottish independence movement and debate its reaction to an unpredictable and fast-moving world in its upcoming Spring conference on Saturday, 10 March.

Ric, established in 2012 as a left-wing, non-party affiliated political action group in anticipation of the 2014 independence referendum with the slogan ‘another Scotland is possible’, has united both sympathetic forces and traditional opponents within Scottish radicalism in the past, bringing together figures from the left of the SNP, the Scottish Greens, the Scottish Socialist Party and RISE, as well as trade unionists, anti-nuclear activists, republicans and unaligned pro-independence leftists.

The Spring conference, taking place at the City of Edinburgh Methodist Church, will host a series of panel sessions on some of the most pressing and divisive topics currently facing the independence movement.

The conference will open with a discussion of the impact of Brexit on Scottish independence between Scottish Green co-convener Maggie Chapman and Neil Davidson, lecturer in sociology at the University of Glasgow and author of ‘Neoliberal Scotland: Class and Society in a Stateless Nation’.

Later on, the conference will address the effect of Corbynism and the election of Richard Leonard as Scottish Labour leader on Scottish politics, with a discussion including Ric co-founder Cat Boyd, left-wing SNP MP Tommy Sheppard and Rory Scorthorne, author of ‘Roch Winds: A Treacherous Guide to the State of Scotland’.

The Scottish independence movement’s internationalist connections will also be covered in a session on Catalonia and Ireland, featuring former SNP MP and Catalan solidarity activist George Kerevan and Gerry Carroll, West Belfast’s Member of the Legislative Assembly for the People Before Profit alliance.

“Looking at the lineup, I get the feeling that it will involve real debate, not just fragile declarations of unity.” Ric co-founder Cat Boyd

Writing in her column in the National newspaper, Cat Boyd commented on the upcoming conference, saying: “The grassroots activists who organised this year’s conference have done brilliantly in this regard. Looking at the lineup, I get the feeling that it will involve real debate, not just fragile declarations of unity.

“Speakers will outline divergent positions on Brexit, Corbyn and internationalism to an audience who will – I expect – show a capacity for intellectual respect and tolerance for difference that will shame mainstream politicians.”

The Ric Spring conference begins at 11am on Saturday, March 10, at the City of Edinburgh Methodist Church, 25 Nicholson Street. Organisers will be asking for £10/5 on the door, but those attending are requesting to book a ticket on EventBrite.