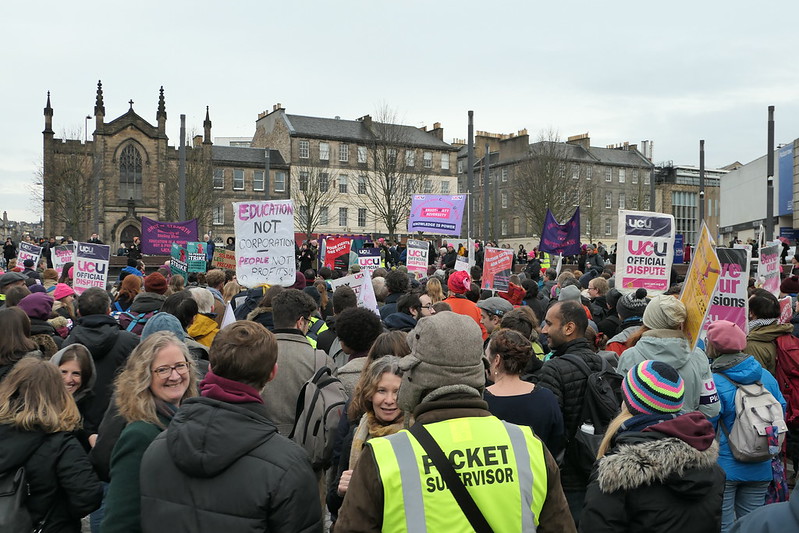 Members of the University and College Union began strike action this week over pay, working conditions and pensions

THE SCOTTISH GREENS have challenged the Scottish Government not to “undermine” the ongoing strike by the University and College Union (UCU) over pay, working conditions and pensions, after industrial action began at 12 Scottish universities this week.

As part of a wider strike affecting 48 universities across the UK this week, UCU members in Scotland joined picket lines on Monday [25 November] after 78 per cent of the polled union members voted in favour of strike action over changes to pensions, and 73 per cent supported action over pay and conditions.

In addition to the strike, UCU members will protest further by refusing to cover absences, working to contract or reschedule lectures lost due to the industrial action.

While UCU Scotland official Mary Senior has described the strike as a “last resort”, she said that universities had left the union’s members with “no alternative.”

Senior commented: “We’re asking students to call on university principals to get their representatives back to negotiating table for serious talks.”

Upon the announcement of the strike action, NUS Scotland pledged its solidarity with the UCU, with NUS Scotland president Liam McCabe commenting to CommonSpace: “The UCU have the full support of the student movement as they fight for the fair deal they rightly deserve.”

Lochhead described the strike as “unwelcome news,” adding: “Universities are autonomous institutions and matters relating to pay, working conditions and pensions are for them to determine. Although it is not for the Government to intervene, it is worth saying that industrial action is in the interests of no one, especially students, and I expect management and unions to make every effort to reach a settlement on these matters.

Responding, Greer pressed the minister on the matter, saying: “Dring the previous round of sustained industrial action, which in that case was by college lecturers, the government said that it would remain neutral and then in the very next breath called for the union to suspend its industrial action.

“In this case, will the minister respect the right of workers to take industrial action and withdraw their labour? Will the Government give a commitment to do nothing to undermine the union during the strike action?”

Lochhead replied that the union were “of course” acting within their rights to highlight “genuine concerns”, and that they were “right to do so.”

Lochhead continued: “I urge both sides to get round the negotiating table – I know that employers have offered to do that – in order that we can settle the dispute sooner rather than later. Any government anywhere would want to minimise the period in which industrial action takes place, and we will continue to monitor the situation.”

Greer argued that the minister had not answered his question, but went on to ask: “Will the government acknowledge that university lecturers’ pay has plummeted by 20 per cent in real terms at the same time as their workload has increased to the point that they work an average of two days’ overtime a week? Does the Government consider it acceptable for any worker to see their pay plummet by 20 per cent while their workload explodes?”

Without addressing the specific issues raised by Greer or the union, Lochhead answered: “If employees have concerns about their workload, or about any other issue – I know that a number of issues are being discussed as part of the dispute – they have every right to raise those concerns with their employers and act through their union representatives.

“We hope that both sides can reach an agreement sooner rather than later, so that there is an end to industrial action. As I said, staff have the right to act through their unions.

“For all the SNP’s criticism of Tory attacks on union rights, their own record in government is a poor one when it comes to industrial relations and respecting workers.

“At the same time as lecturers and support staff have seen their pay decline 20 per cent in real terms, their workload has exploded, with the average lecturer working the equivalent of two days unpaid overtime a week. More than half of academic staff are on insecure contracts. No wonder they are on strike.

“The Scottish Government can’t wash their hands of this and they certainly shouldn’t be undermining workers’ rights to take industrial action in defence of their pay, pensions and conditions.”