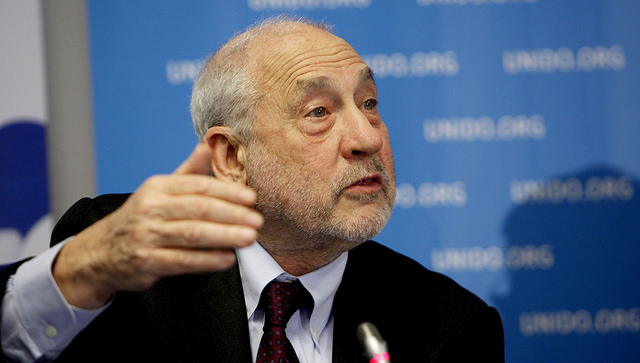 JOSEPH STIGLITZ, the Nobel Prize-winning economist and member of the Scottish Government’s council of economic advisors, has argued if Scotland were to “go its own way” by achieving independence and subsequently re-join the EU, it would “resolve a lot of the uncertainties that are being created by the mismanagement of Brexit”.

Speaking in an interview on the BBC’s Sunday Politics Scotland, Stiglitz – who endorsed Scottish independence during the 2014 referendum and has also served as an advisor to Labour leader Jeremy Corbyn – said that he was still “sympathetic” to the arguments for independence in light of Brexit, saying that the UK’s negotiations for leaving the EU were heading for a “disaster”.

Stiglitz elaborated: “When you had a referendum a couple of years ago it seemed to me at that time it was very clear that the values and policies of Scotland were moving in a markedly different direction from those in England and that within the broader context of the EU, you might say the greater devolution of powers that might be associated with independence would be of value.”

“It was very clear that the values and policies of Scotland were moving in a markedly different direction from those in England.” Economist Joseph Stiglitz

Stiglitz also spoke in favour of devolving immigration powers to the Scottish Parliament, saying: “It fits into a complicated issue of devolution and what powers are given to Scotland.

“It’s very clear, just to take one example – Scotland’s approach to education is very different from that of England. Scotland for many years has been trying to ensure that everybody has access to education but keeping fees low, and being very open to the rest of the world rather than being more closed.

“It is certainly an appropriate issue to be on the table that Scotland should have the powers to go its own way in migration policy.” Economist Joseph Stiglitz

“So given that there are these fundamental differences in values and in economic needs, it seems to me that it is certainly an appropriate issue to be on the table that Scotland should have the powers to go its own way in migration policy.”

Stiglitz also offered some qualified words of warning about any future basic income policy, in the wake of the Scottish Government’s announcement in its Programme for Government that funding would be provided to study to feasibility of such a scheme.

While Stiglitz did not come out against basic income in principle, he argued for the primacy of fighting economic inequality, saying: “Should this scarce money be used to give everybody a basic amount or should it be targeted at those who have particularly strong needs? I think there needs to be some targeting.

“Secondly, over the long run, our responsibility as a society is to make sure everybody who wants a job can get one. The underlying problems of lack of employment and lack of adequate pay – anybody who works full time ought to have a liveable income – those are the issues that in the long run we need to address.”