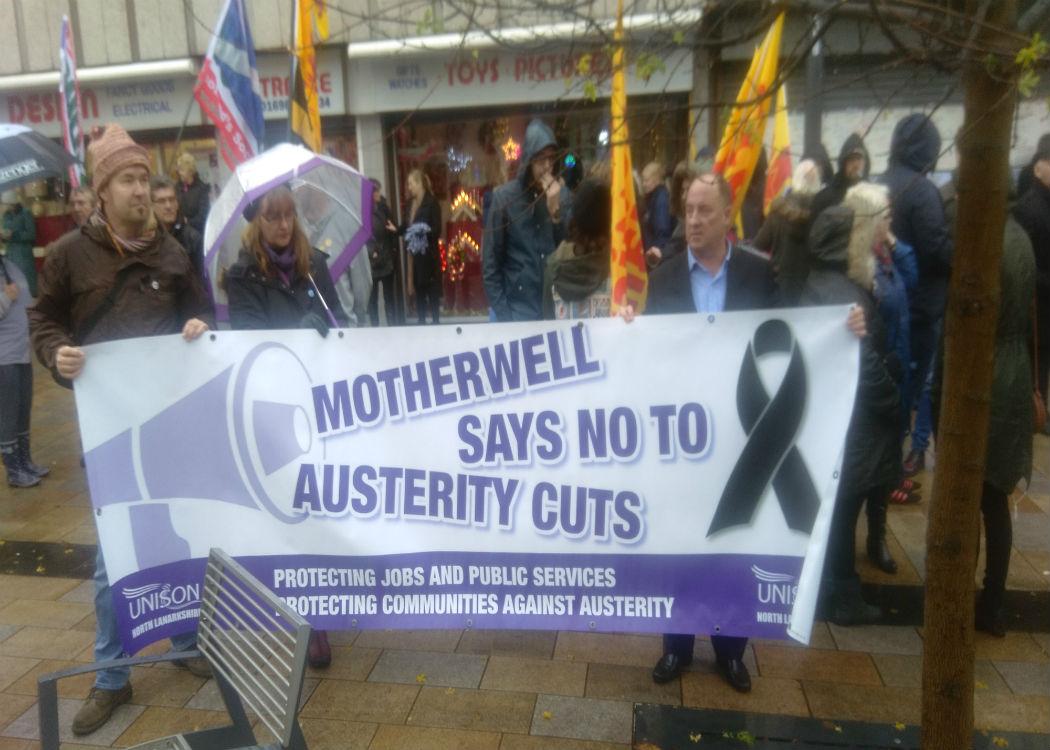 A PROTEST march in Motherwell has delivered a defiant message to North Lanarkshire Council over austerity cuts and job losses at the local Tata steel works which is facing closure.

The demonstration, organised by local campaign group North Lanarkshire Fights Back (NLFB), marched with over a hundred local residents from the town centre on Sunday 16 November, past the threatened Dalzell steel works and onto the North Lanarkshire Council headquarters to deliver a statement refusing to accept cuts.

The protest comes after 270 job losses from the Tata steel plants in Motherwell and Cambuslang and PS45m in cuts by North Lanarkshire Council were both announced within a week.

Independent MSP John Wilson, who joined the march, told CommonSpace that the message to North Lanarkshire council from the demonstration was “think again about what you are doing”.

He said: “On top of the job losses we have already heard from Tata, the council job losses and the service cuts, for the people in the most vulnerable and deprived communities their opportunities to get into employment, to get a decent income and to be able to raise themselves out of poverty will be virtually impossible.”

Wilson argued that the steel industry had to be protected as a strategic asset: “Steel is vital to our growth. It is vital to many of our industries, construction, ship-building and others and we have to ensure that the production capacity in Scotland remains,” he said.

“We shouldn’t rule out public ownership or a worker’s buyout supported by the government rather than renationalising it, asking the workforce to take on the industry,” he added.

The march, which included steel workers, moved through the town, taking in the Dalzell steel works, to the council buildings, where speeches were heard from local trade unionists and campaigners.

At the rally Willie Murphy, who has worked in the local steel industry for 37 years told CommonSpace: “It’s fantastic seeing people come out on a wet and miserable November day to offer their support to all those who are losing their jobs.

“A lot of the people here are going to be losing their jobs. But there are some people here who are in safe jobs, or who don’t work at all, but they’ve come here to show their support and that’s fantastic”

When the march reached the council headquarters, police officers and council staff refused to allow organisers either to submit the statement by hand to the council or to tape the statement to any doors or walls.

Local SNP councillor David Baird, who was among the protestors, offered to take the statement personally to the council.

Part of the NLFB statement, which was submitted to the council with the signatures of local residents, read: “We cannot afford to allow this to happen at a time when one in four children in Scotland are living in poverty, and unemployment in Scotland stands at over 150,000. Those facing redundancy and the communities built around their hard work cannot be left to fight this alone.”

“Since we lost Ravenscraig, Dalzell is the only steel works we have left; it makes specialists steel so there’s no reason to close it down. I’d like to see it nationalised. I’m hoping we will win.”

The campaign organisers have stated their intention to continue the campaign and establish local branches throughout North Lanarkshire.