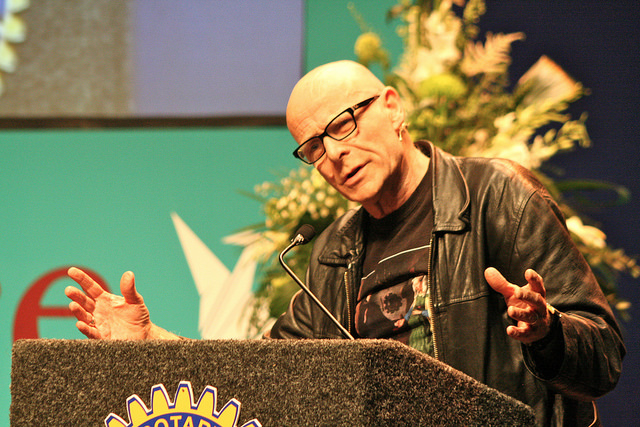 Speaking to CommonSpace, Eamonn McCann said the people of Northern Ireland should not wait on London, Brussels or Dublin to make decisions

LONGSTANDING Northern Ireland civil rights activist Eamonn McCann has urged working class people to organise in preparation for Brexit instead of waiting for decisions from Brussels and London.

The border between the north and Republic of Ireland has been a key issue in the ongoing Brexit negotiations, while the region has also been in crisis for over a year after the Stormont government broke down when former deputy first minister Martin McGuiness resigned.

Northern Ireland – which voted to Remain in the EU by 55 per cent to 45 per cent at the referendum on membership in 2016 – has been at the centre of a vital tussle between the EU and the UK over the terms of Brexit because of its impact on the Irish border and Good Friday Agreement.

“Whether or not we are in the single market at the cost of the [UK] union or the EU, my view is that working class people have to be organised to defend themselves.” Eamonn McCann

Speaking after Prime Minister Theresa May’s recent visit to Stormont, former People Before Profit MLA McCann – who has been a high profile activist in Northern Ireland throughout the Troubles, and who was a witness to the Bloody Sunday massacre which saw 28 civilians killed by British soldiers in 1972 – urged the region’s working classes to take control over their own futures.

“Whether or not we are in the single market at the cost of the [UK] union or the EU, my view is that working class people have to be organised to defend themselves,” he told CommonSpace.

EU member state Ireland wants to protect the open border to Northern Ireland because of trade and cooperation between the north and south. The EU feels responsible to keep this intact, since Ireland is expected to be hit hard economically by the effects of Brexit.

With no other border neighbours as members in the EU, the Irish economy is predicted to suffer by seven per cent in the event of a hard border. In December, Brussels and London decided that one of three scenarios will happen with the Irish border issue: creating a frictionless border; negotiating on a customs arrangement for Northern Ireland; or allowing Northern Ireland to stay in the single market and the customs union in case of a hard Brexit. Now, the European Union is preparing a legal document based on the third option.

Earlier this month, EU Chief Brexit Negotiator Michel Barnier, said: “The UK decision to leave the single market and to leave the customs union would make border checks unavoidable. Second, the UK has committed to proposing specific solutions to the unique circumstances of the island of Ireland. And we are waiting for such solutions.

“The third option is to maintain full regulatory alignment with those rules of the single market and the customs union, current or future, that support north-south cooperation, the all-island economy and the Good Friday Agreement.

“It is our responsibility to include the third option in the text of the withdrawal agreement to guarantee there will be no hard border whatever the circumstances.”

The Good Friday Agreement was significant to the peace process in 1999 by decommissioning weapons, introducing a multi-party system in the north and removing the border between The Republic of Ireland and Northern Ireland.

“We have a very weak private sector in Northern Ireland, much weaker than in Scotland.” Mick Fealty

“It’s 20 years since the Good Friday Agreement was signed, and it was based upon having, in fact, two separate electorates in Northern Ireland; one catholic and nationalist, the other protestant and unionist. I think it never solved the Northern Ireland problem.”

Mick Fealty is the editor of the influential Northern Irish political blog Slugger O’Toole, and a co-writer of the book A Long Peace? The Future of Unionism in Northern Ireland. Contrary to McCann, Fealty believes that the Good Friday Agreement is vital to protect: “Trade, with a ‘no deal’ scenario could create some serious economic imbalances around the border,” he told CommonSpace.

“There are businesses in Derry that almost entirely exist because there is no tariff border between the north and the south. They trade on the advantage of the currency difference. Big companies like that, where some of them are acquiring 200-300 employees, may go out of business within the following months.

“We have a very weak private sector in Northern Ireland, much weaker than in Scotland. We do not have any big major players like the whisky distilleries, the banking sector or the oil industry. North-side trade is going to have some very painful consequences.”

“We do not have any big major players like the whisky distilleries, the banking sector or the oil industry. North-side trade is going to have some very painful consequences.” Mick Fealty

Meanwhile, Northern Ireland remains at a stalemate over the crisis of government at Stormont regarding domestic politics in the north and a dispute between Sinn Féin and the DUP. A deal must be signed by the two parties but both are holding firm on their positions and no compromise has been reached.

If no agreement can be made, Northern Ireland may return to direct rule from London, potentially disrupting stability in the region further.

DUP leader Arlene Foster has said that restoring an executive continues to be the goal, but that the party will not accept a one-sided deal, while Sinn Féin’s leader in Northern Ireland Michelle O’Neill says the party is in contact with the Irish and UK governments to discuss the future.