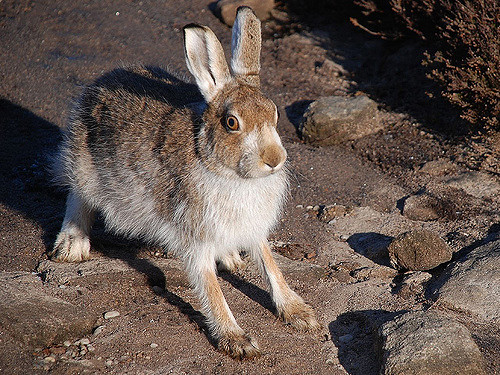 THE LARGE-SCALE CULLING of Scottish mountain hares is “not acceptable”, First Minister Nicola Sturgeon has stated at First Minister’s Questions.

Sturgeon made her condemnation of the practice in response to a question from Green MSP Alison Johnstone, who described the practice as “sickening slaughter”.

Johnstone’s question was spurred by the recent release of footage, passed to BBC Scotland’s investigation unit by animal rights charities OneKind and The League Against Cruel Sports, showing gamekeepers on Scottish grouse moors in the Cairngorms using all-terrain vehicles to hunt and kill mountain hares.

Sturgeon said that the Scottish Government would explore all options to prevent such culls from taking place in future.

These options would include that which has been proposed by the Scottish Greens, who are calling for a ban on the killing of mountain hares.

At present, Scottish landowners can shoot mountain hares without a licence between August and February. No restrictions are currently imposed by the Scottish Government on how many hares can be killed during the open season.

As an activity offered by Scottish game estates, the Scottish Greens have said that it is estimated 25,000 mountain hares have been killed in one year, comprising 14 per cent of the overall mountain hare population.

Following their exchange at FMQs, Alison Johnstone, who is also deputy convener of Holyrood’s cross-party group on Animal Welfare as well as Species Champion for the Mountain Hare and Brown Hare, said: “Large-scale culling of mountain hares is routine on many sporting estates in the belief that it protects grouse against viruses spread by ticks but there is no scientific evidence to back that up. We need to ban these culls.

“The voluntary restraint urged by the government’s nature agency has proved inadequate. I have previously suggested ministers use their powers to introduce a nature conservation order to prohibit culls. Scotland is a national of animal lovers and the public will be outraged that the government continues to drag its feet on ending animal cruelty.

“It was good to hear the First Minister say that the Government will explore all options to prevent mass culling.”

Johnstone’s dismissal of the policy of voluntary restraint went against earlier comments made by Tim Baynes of Scottish Land and Estates, who told the BBC that hares were only culled when their numbers were high, and argued that gamekeepers did practice restraint.

Baynes said: “The restraint is in not shooting them when their numbers are low.”

In October of 2017, a coalition of 10 environmental and wildlife groups – including RSPB Scotland, the Scottish Wildlife Trust, the Scottish Raptor Study Group, the Badenoch and Strathspey Conservation Group, the Cairngorms Campaign, the National Trust for Scotland, the Royal Zoological Society of Scotland, the Mammal Society and the John Muir Trust and Mountaineering Scotland – called for a temporary ban on all mountain hare culling on grouse moors, arguing that such culls threatened the species with local extinction.