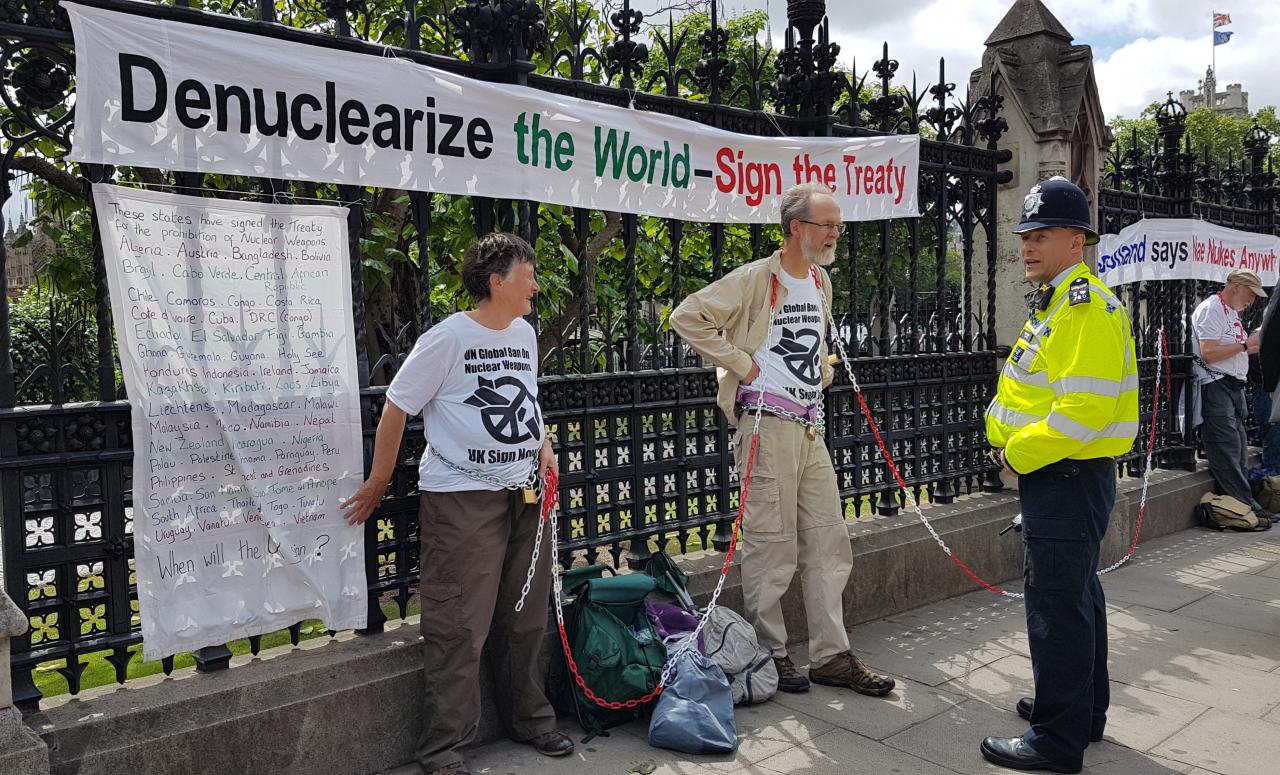 The UK has refused to sign the UN Treaty on the Prohibition of Nuclear Weapons, which if ratified by 50 countries will make the possession of nuclear weapons illegal

ANTI-TRIDENT protestors from Scotland have chained themselves to the UK Parliament, demanding the government signs the Treaty on the Prohibition of Nuclear Weapons and disarms its Trident nuclear missiles.

Janet Fenton from Edinburgh, a Vice Chair of Scottish CND, was one of those to take part in the direct action, and said: “The Scottish Government, civil society groups, faith community leaders, and most people in Scotland want nuclear disarmament. A majority of our MPs voted against Trident replacement in the debate last summer. The government refuses to listen to our elected representatives, so we’ve come to London to remind Theresa May that Scotland totally rejects the UK’s nuclear weapons and call on the government to Scrap Trident and sign the Ban Treaty.”

The Treaty on the Prohibition of Nuclear Weapons (TPNW) was agreed at the UN  in July 2017 by 122 countries who took part in drafting it. It has been signed by 59 countries and ratified by twelve. If 50 ratify the Treaty, it will make the production, possession and deployment of nuclear weapons illegal.

The UK has refused to sign the Treaty and lobbied other countries to rebuff it, releasing a statement saying it “firmly believes that the best way to achieve a world without nuclear weapons is through gradual multilateral disarmament negotiated using a step-by-step approach”.

The UK is one of nine countries in the world which currently has nuclear weapons. The UK Parliament voted in 2016 to begin the construction of a new Trident nuclear weapons programme to replace the current one, at a total lifetime cost which has been estimated at over £200 billion.

Brian Larkin from Penicuik, Coordinator of the Edinburgh Peace & Justice Centre, was another to participate, and said: “The Trump – Kim summit should have been a wake-up call. Media reports have focussed on North Korea giving up its nuclear weapons. But nine countries still have over 14,000 nuclear weapons. Trump and Kim have agreed to ‘denuclearize’ the Korean Peninsula. But Britain, the US, and the other nuclear powers can’t expect Kim to give up his nuclear weapons while we keep ours. So let’s sign the Ban Treaty, denuclearize Britain and the whole world.”

Jane Tallents from Penicuik said their protest was in the spirit of the Suffragettes, who took direct action – including chain themselves to the Parliament – to demand the vote for women. The centenary of women’s right to vote was celebrated in demonstrations across the UK earlier this month.

Tallents said: “Last week marked the centenary of women being given the vote. Women campaigned for the vote in many ways.  Once two suffragettes chained themselves to a metal grille that confined women to a separate seating area – they were excluded from the men only public gallery of the House of Commons. Like them we’ve tried everything to persuade the government to disarm Trident and abolish nuclear weapons. We’ve signed countless petitions, lobbied MPs and held countless demonstrations – to no avail.

“We even held a singing demonstration in the Westminster Central Lobby when Theresa May said she would push the button and kill a hundred thousand people and Parliament approved Trident replacement. By chaining ourselves to the railings we are sending a strong message: Our having nuclear weapons keeps the world in chains. It’s time to break the nuclear chain and free the world from the threat of a nuclear war.”

A demonstration will take place on 26 June in Glasgow against the Council’s hosting of a major arms fair, of which the two main sponsors – BAE Systems and Babcock – are the two leading companies in the Trident renewal programme. SNP council deputy leader David McDonald claimed there would be no discussion of Trident on the programme, despite CommonSpace revealing sessions, speakers and a student recruitment effort clearly linked to the Trident renewal programme.

On Tuesday [19 June], the council removed it’s People Make Glasgow logo from the arms fair website, but said it was still providing practical support for the exhibition. 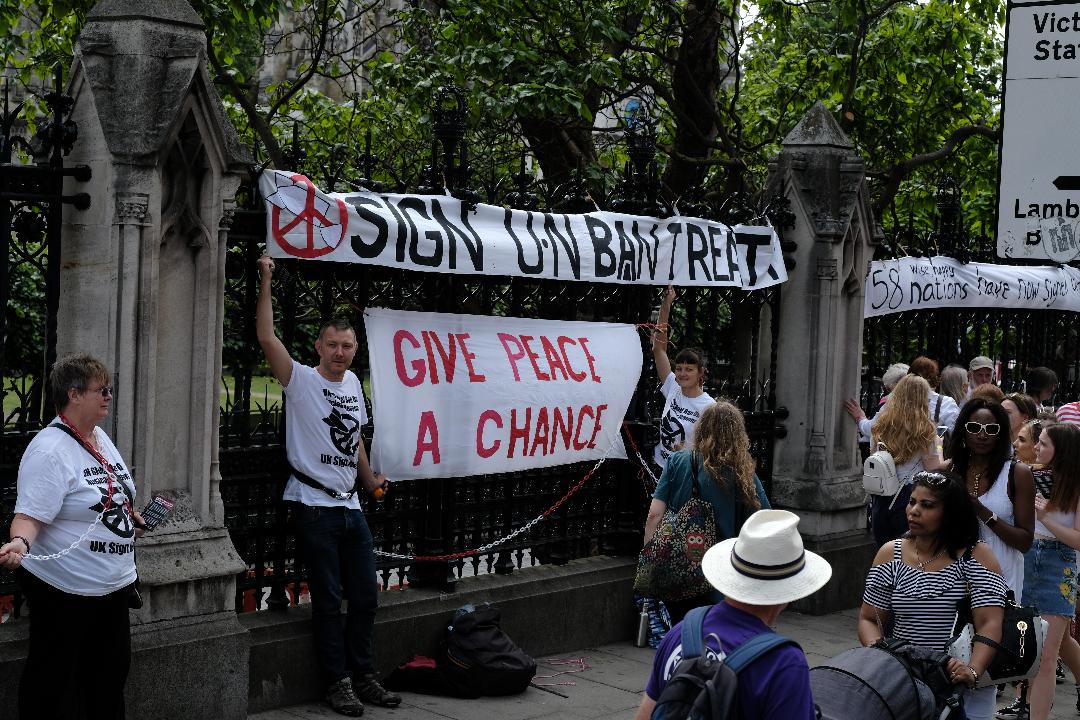 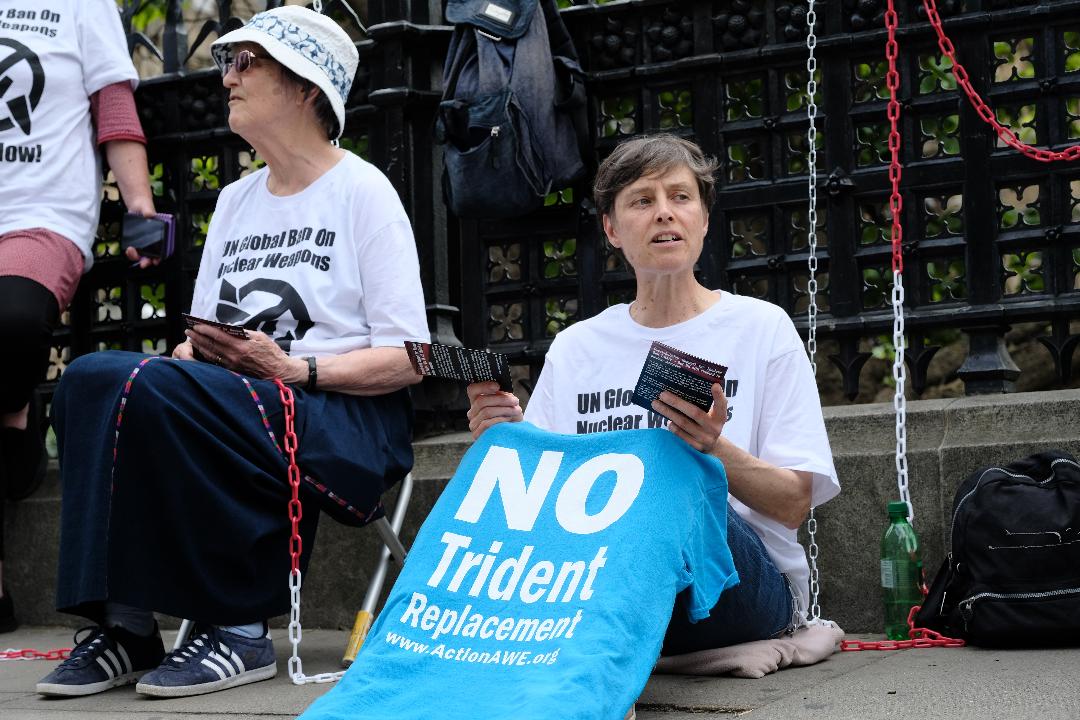 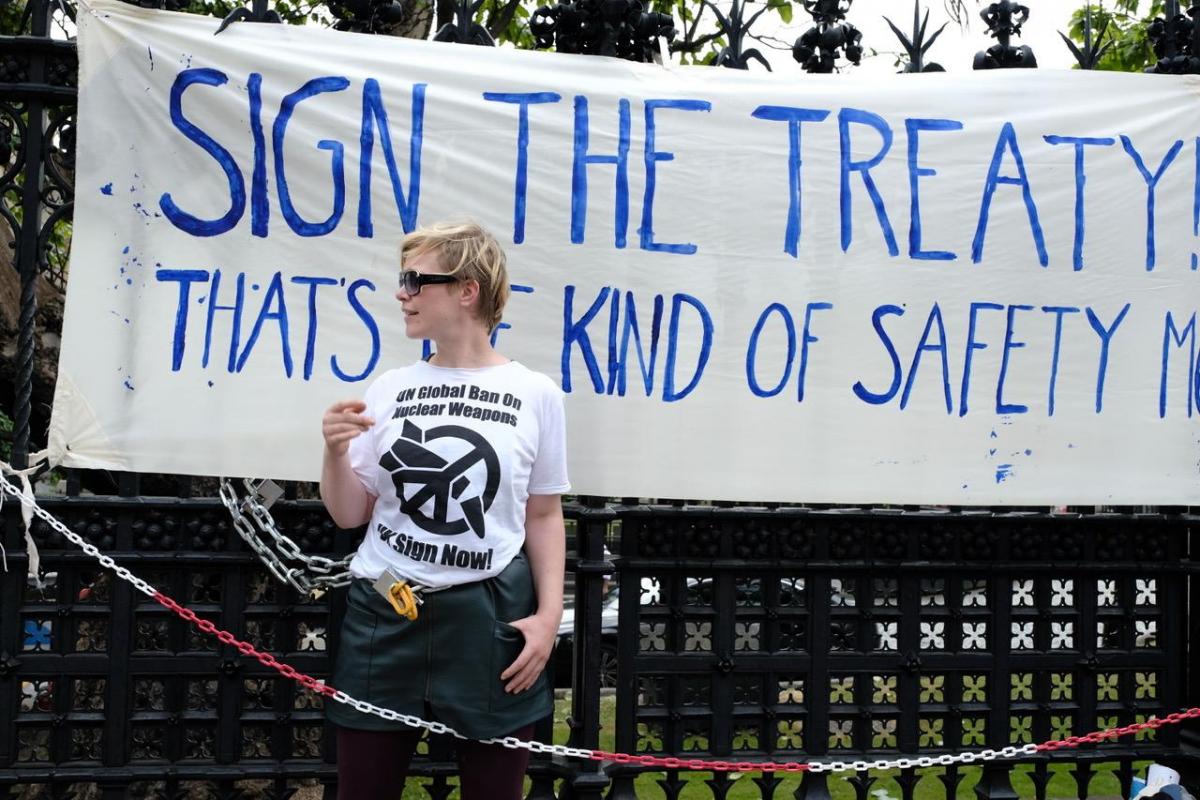