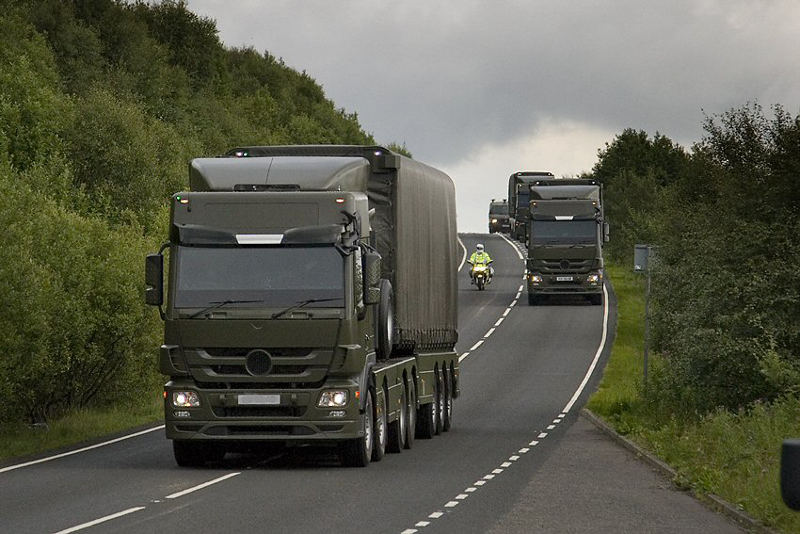 AFTER concerns were raised about the readiness of Scottish authorities to respond to emergencies involving nuclear convoys in Scotland, anti-nuke campaigners have “cautiously welcomed” a commitment from deputy first minister John Swinney for a review of response plans.

The Scottish Campaign for Nuclear Disarment [CND] were responding to a promise by the Scottish Government to review the readiness of Police Scotland, the Scottish Fire & Rescue Service and other civil authorities to respond to serious incidents involving the road convoys which regularly transport nuclear warheads over Scotland.

Serious concerns about public safety were raised in a 2017 report by the monitoring group Nukewatch, “Unready Scotland”, concluding that authorities were unprepared to respond to any serious incident involving the convoy.

An investigation by The Ferret also found that incidents involving the convoys had been on the increase since 2008, with 44 accidents being recorded during the journeys in 2017, including cases of brake failure, fuel leakage, overheated engines, delays or diversions due to weather, protests and traffic accidents, and one instance of “dogs loose on the carriageway”.

In a statement, Scottish CND said that Deputy First Minister John Swinney had confirmed the Scottish Government would carry out the review.

Scottish CND Chair, Arthur West, said: “ We are pleased that the Scottish Government has decided to conduct a review  – this is a significant step forward. Our caution is prompted by two considerations.

“The threat posed by the convoys is specific, given that the warheads, though unarmed, will contain both high explosive and plutonium and this means that a response to an incident could involve dealing not only with highly toxic radiological substances but also widely distributed and unexploded explosive fragments. We of course understand that there are many features that will be common for any emergency response, such as evacuations, public communications, recovery hubs, shelter etc. but any review that does not look specifically at the nuclear weapon issue will not address our concerns.

“We are also convinced that an effective review has to be transparent, at least in terms of the participants, the remit and the outcomes. Without that transparency the public cannot be assured that the issue is being addressed with any rigour. As Annabelle Ewing herself said during the recent debate: ’we all want to have that assurance’. “

“We share with the Scottish Government an utter rejection of nuclear weapons and the belief that the new UN Treaty on The Prohibition of Nuclear Weapons has given fresh impetus for global nuclear disarmament. We believe that with an open and honest look at the convoy risks the government will be taking a modest but logical step towards acting on that rejection.”

The SNP Government has been a strong opponent of the UK Government’s approach to nuclear weapons, and has said that they would seek to remove them from an independent Scotland.

In a Scottish Parliament debate earlier in May, SNP MSP Clare Haughey said she thought Scotland had been “incredibly lucky” that no major incidents have occurred in the 50 years for which nuclear weapons have been transported around the country.