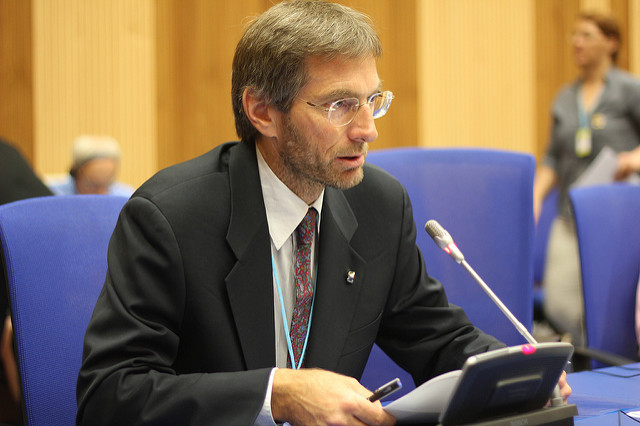 Global nuclear weapons authority to speak in Edinburgh this week

A WORLD renowned authority on the impact of nuclear weapons, Dr Tilman Ruff, will speak at an event in Edinburgh this Friday focusing on nuclear weapons and climate change.

This comes just weeks before the UN Treaty to Prohibit Nuclear Weapons (TPNW) is open for signature by all states, and amid rising tensions between the USA and North Korea following North Korean nuclear tests.

Dr Tilman Ruff is a founding chair of the International Campaign to Abolish Nuclear Weapons (ICAN) in Australia and has played an important role in developing the global understanding of the humanitarian, health and environmental consequences of nuclear weapons.

The event at the Quaker Meeting House in Edinburgh will be hosted by Scottish peace campaigners including Scottish Campaign for Nuclear Disarmament (SCND) and Scrap Trident.  Janet Fenton, vice-chair of Scottish CND said: “This is a rare and timely opportunity to hear directly Tilman’s expert testimony on the humanitarian and environmental catastrophe that nuclear weapons can inflict, and their incompatibility with the sustainable development goals.

“This is a great chance also to explore with him the implications and significance for Scotland, a small country with concerns about climate change, that is forced to host all of the UK’s nuclear weapons.”

Ruff is co-president of International Physicians for the Prevention of Nuclear War (IPPNW), which won the Nobel Peace Prize in 1985, the year he joined the organisation’s world conference.

In July this year, 122 countries at the UN voted in favour of a treaty to ban nuclear weapons, which will open for signatures on 20 September. Once the treaty is ratified by at least 50 countries, it will come into force in 90 days.

Ruff has described the treaty as a “historic step” and noted just how momentous this move was given “the ferocious pressure on countries to vote no by the nuclear-armed states, who see that this will fundamentally challenge their continued possession of nuclear weapons.”

The UK remains one of nine states known or thought to possess nuclear weapons and the UK Government released a joint statement with the USA and France indicating that it does “not intend to sign, ratify or ever become party to” the treaty to prohibit nuclear weapons. The statement said that nuclear deterrance had been “essential to keeping the peace in Europe and North Asia for over 70 years”.

The Conservative UK government supports the renewal of Trident nuclear weapons which are based in Scotland. The Scottish Government opposes renewal and the SNP has said that “nuclear weapons are immoral and have no strategic value in preventing conflicts in today’s world”.

Yesterday, North Korea conducted its largest nuclear test yet, which the North Korean media has described as a new type of hydrogen bomb. In response, Pentagon chief James Mattis has warned of a “massive military response” if any threat is made to the USA.

Scottish CND has advocated for a “diplomatic solution” to the situation, and called on all parties involved to refrain from “proactive military exercises and inflammatory and aggressive public statements”.