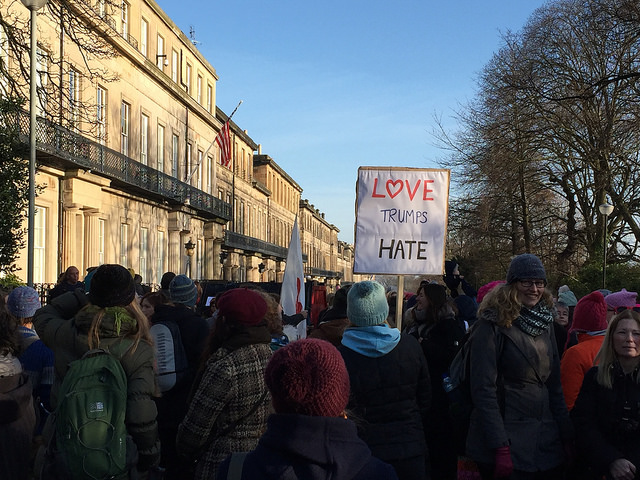 NUS Scotland president Liam McCabe said any attempt to monitor protests against Donald Trump’s UK visit would encroach on “the privacy of citizens of Scotland, and their right to protest freely”

THE PRESIDENT of the National Union of Students (NUS) Scotland has condemned any attempt by authorities to monitor or limit lawful protest, following reports that Police Scotland has been contacting student associations in Edinburgh seeking information about activist groups involved in protests against US President Donald Trump’s upcoming visit to Scotland.

Yesterday afternoon [11 June], NUS Scotland president Liam McCabe wrote a post on Twitter, asking Police Scotland directly why they were emailing student officers at the Edinburgh Napier Students Association, the Heriot-Watt Student Union, the Edinburgh College Students’ Association and the Scotland’s Rural College (SRUC) Students Assocation “to ask them about activist groups attending #TrumpUKVisit and who they are?”

McCabe continued: “I’d appreciate an explanation for these invasive inquiries.”

In a reply to McCabe’s original Tweet, the SRUC Students Association stated: “Just to clarify, none of our officers are collaborating. We received an unsolicited email from police Scotland and have informed NUS Scotland that this was happening.”

During Trump’s visit to the UK, part of which will be spent in Scotland, protests have been arranged in Edinburgh, Glasgow, Dundee and Aberdeenshire by Scotland United Against Trump, a coalition of organisations including the STUC, the SNP, the Scottish Greens, Scottish Labour and the Scottish Trade Union Congress.

“Students’ associations will continue to build on their proud history of activism by supporting their students to protest peacefully.” NUS Scotland president Liam McCabe

Speaking to CommonSpace, McCabe said: “Students have been at the heart of many progressive causes – from fighting apartheid, to leading the charge to introduce equal marriage alongside LGBT+ activists. Donald Trump’s dangerous and divisive politics represent everything that our movement stands against. I’m proud that so many people will be taking to the streets this weekend to make it clear that this brand of politics is not welcome here.

“The right to peaceful protest is the cornerstone of any democracy. We’d be concerned by any measures to limit this right, or monitor those opposing Trump’s visit, as this would be an encroachment on the privacy of citizens of Scotland, and their right to protest freely.

“Students’ associations will continue to build on their proud history of activism by supporting their students to protest peacefully. We hope to see as many people in Scotland come together in peaceful protest to send a clear message that Scotland stands against everything Trump stands for.”

ACC Mark Williams of Police Scotland told CommonSpace: ”Any groups who we believe may be involved in peaceful protest would be contacted as a matter of course during our planning for major events. Our primary aim is to keep people safe, we also have a duty to facilitate peaceful protest and will be engaging with organisers of these events to ensure they pass off as safely as possible and that disruption to local communities and businesses is kept to a minimum.”*

Police Scotland has previously been the subject of controversy surrounding allegations that it has attempted to use students as “informants” against migrant sex workers. In April of this year, the grassroots sex worker-led collective Sex Worker Advocacy and Resistance Movement (SWARM) revealed that it has learned Police Scotland were seeking to encourage students to report flats occupied by Eastern European women that showed “signs” of sex work happening within, “under the pretence of investigating human trafficking.”

“Student unions remain a powerful force for good, and non-compliance with Police Scotland ahead of these actions will be of the utmost importance.” EUSA international students representative Emily Robinson

Emily Robinson, international students representative for the Edinburgh University Students Association, also told CommonSpace: “The increasing reliance of Police Scotland on student informers (both in this case and in the case of police in Edinburgh using students as informants against migrant sex workers) is worrying for the safety of the student movement but should also be a source of comfort — the powers that be don’t try and attack unsuccessful movements or movements with no chance of reaching hegemony.

“Student unions remain a powerful force for good, and non-compliance with Police Scotland ahead of these actions will be of the utmost importance.”

Speaking on behalf of Scotland United Against Trump, Kirsty Haigh said of the upcoming protests: “Trump likes to talk up his Scottish connections, but we are going to show that his politics are not welcome here.

“We will also send a message to the Tory government that we will not tolerate their pandering to Trump.”

Protests against Trump will take place in Glasgow’s George Square and Dundee’s City Square at 5pm on 13 June, as well as at the Trump-owned golf course in Balmedie, Aberdeenshire at 11am and at noon outside the Scottish Parliament in Edinburgh on the following day.

*This response was sent to CommonSpace folllowing publication of the orginal version of the article above. As a result, the article has been updated.