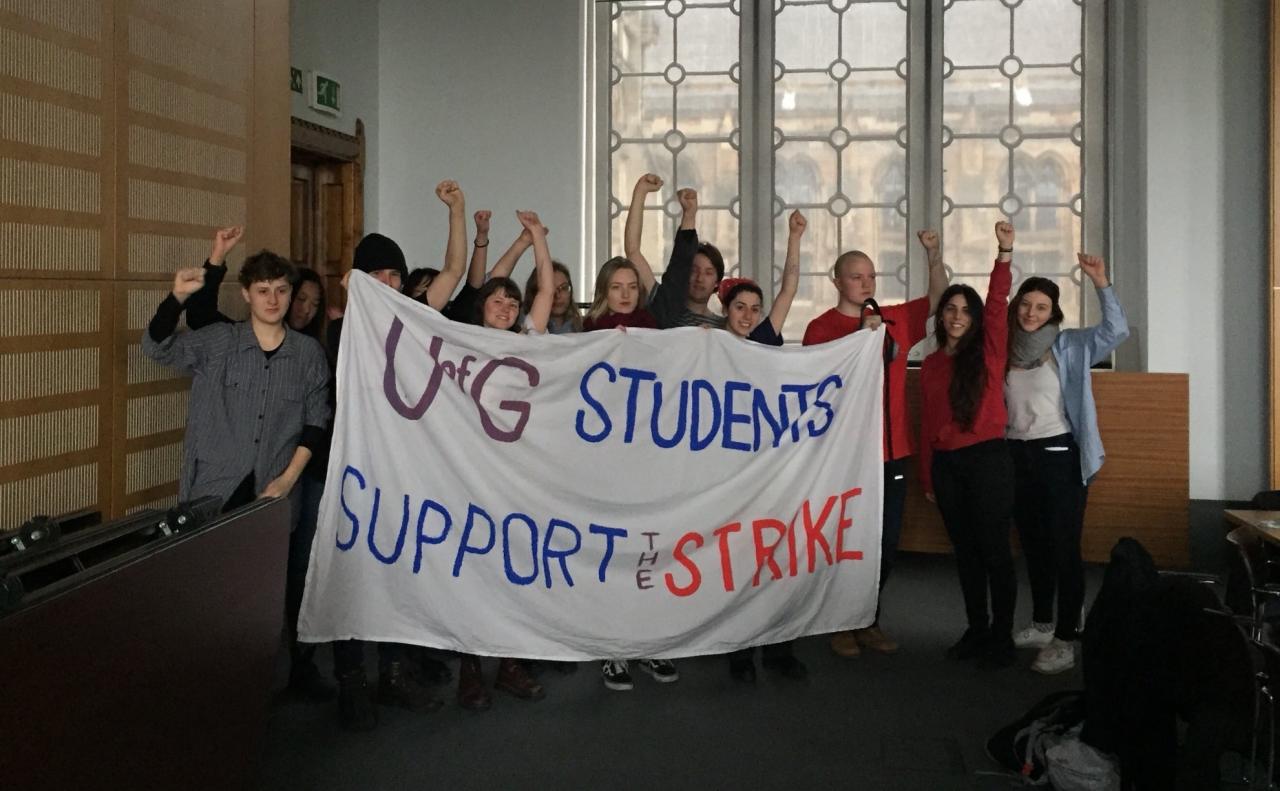 STUDENTS AT Glasgow University and Strathclyde University are the latest in a list of student solidarity groups to stage occupations in support of lecturers striking over pension cuts.

University teaching staff across the UK have been undertaking industrial action led by the University and College Union (UCU) since February after Universities UK (UUK) proposed pension changes which unions say would leave staff significantly worse off.

As of Thursday morning, students are occupying the Senate Room of the Main Building at Glasgow University, and Room 301 at the McCance Building at Strathclyde, joining students across the UK in demanding that the lecturers’ concerns are addressed.

READ MORE: “We will not tolerate any strikebreaking”: Stirling students stage occupation in support of UCU strike

Speaking to CommonSpace, a member of the GU Strike Solidarity Group which organised the occupation, explained why the students were taking action: “I think a lot of the students involved in this movement think that any worker should have a safe retirement – that’s a basic right of workers.

“We also see it as part of a wider development of commodification of education where students are seen as consumers and lecturers are providers. We think this is quite divisive of the university community.

“And at Glasgow University specifically, management is not providing enough information on the negotiations and are not being transparent enough on their relationship with UUK.”

The solidarity group was established a few weeks ago by a group of students who “didn’t think other university bodies were doing enough to support the strike”, a member said.

Students have also been joining lecturers on the picket line, and on Wednesday, the group organised a teach-in focussed on resisting financial capital and ‘the neoliberal university’ as well as hearing from Better Than Zero on the issue of unpaid trial shifts.

The students published a list of demands for university management, asking that senior management support the strike and provide full pay for staff participating, to provide students with adequate information about the strike, and to reveal the full extent with their relationship with UUK.

CommonSpace was advised that representative from human management at the university had already approached the students for further negotiations, and that the occupiers were waiting to hear back about the conclusions.

A statement released by the group warns: “Failure to respond to our demands by 2PM will not be taken lightly, and if our demands are not met we may be forced to take further action.”

Asked what this action might involve, one student said: “You’ll know when it happens. We don’t want to give anything away.”

The students occupying at Strathclyde have put forward their own list of demands, asking that strikers’ pay is not docked and that no demand is made for lectures to be rescheduled, that students who refuse to cross the picket line or join the occupation are not penalised, and that the university principal John McDonald speaks out in support of the strike.

Alessio Gentile, one of the students participating in the occupation, told CommonSpace why the students were demonstrating their solidarity with the strike: “A lot of students have respect and time for lecturers because they see they put a lot of time and passion into their jobs.

“Some of us see ourselves in academia in a few years so we see that these are going to be our working conditions and that needs to be improved.”

A further demand issued by the occupiers unrelated to the strike asks that the new students’ union building include rooms for clubs and societies and a debating chamber. Gentile explained that a new building was set to be opened in 2020 but that the students feel the space proposed, which is considerably smaller than the current union, is insufficient for their needs.

Gentile added: “We’ll be taking further occupation during the new strike period if our demands are not met.”

The strikes do not affect Glasgow Caledonian University, however, the students’ association at GCU has released a statement in support of the strikes.