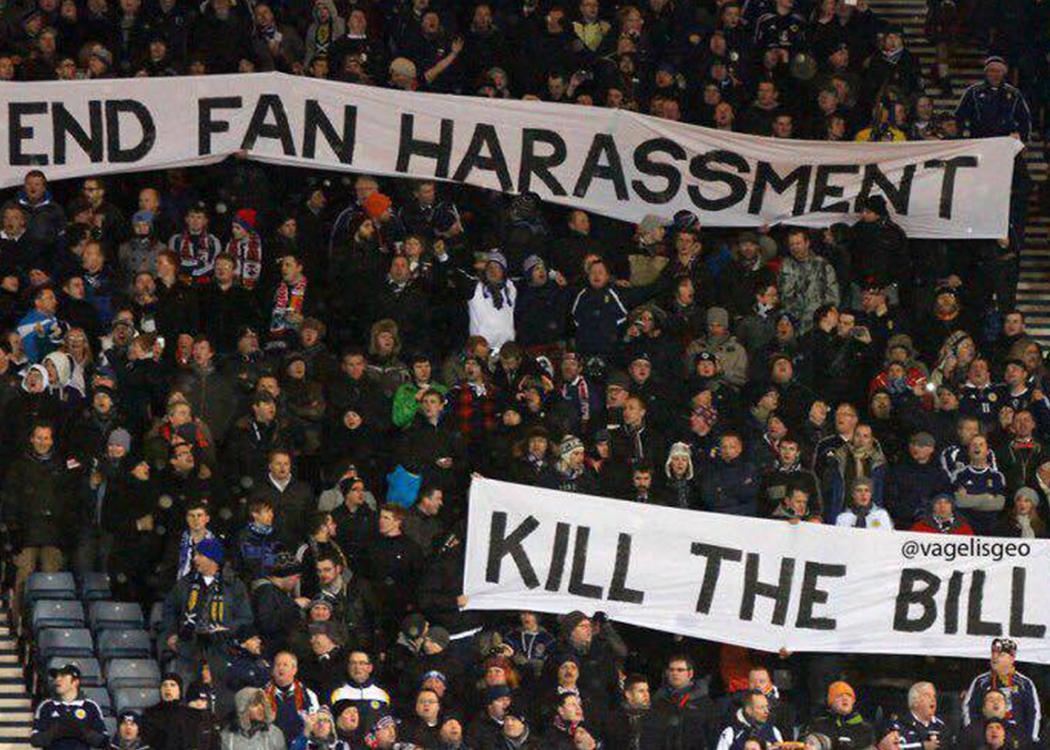 A ROW has erupted over allegations that a Scottish Government minister misled the Scottish Parliament with claims that an anti-Offensive Behaviour Act (OBA) campaign supported his proposals for a rehabilitation scheme for those guilty of breaching the OBA.

Paul Wheelhouse, the minister for community safety and legal affairs, has denied misleading parliament after the campaign group Fans Against Criminalisation (FAC) accused him of claiming FAC supported a diversion from prosecution scheme to rehabilitate OBA ‘offenders’, despite Wheelhouse and FAC having not discussed the scheme.

FAC object to the controversial OBA legislation, which is designed to crack down on sectarianism in football, which they claim criminalises football fans and is not enforceable.

The minister’s initial comments were made on June 6 in a session in the main chamber of the Scottish Parliament, during a debate on the OBA.

Wheelhouse said: “I was delighted to be able to announce last Friday that I have extended the diversion from prosecution programme – which is run by Scotland’s leading organisation for reducing offending in communities, Sacro, as an alternative to prosecution. I know that that chimes with concerns that have been raised by football clubs and other groups, including fans against criminalisation.”

The diversion from prosecution scheme, administered by Safeguarding Communities – Reducing Offending (Sacro), diverts young offenders from being processed through the courts by offering them rehabilitation schemes.

“Paul Wheelhouse clearly misled Parliament on that issue though he continues to claim that he did not.” Michael McMahon MSP

In reply, Wheelhouse claimed that he had discussed the scheme with FAC, to their approval.

He said:”Fans against criminalisation and I had a full and frank discussion, and I am fully aware of the group’s criticisms of the act. I understand their perspective. However, we also discussed whether the group would be supportive of alternatives to prosecution. Members of the group certainly gave me the impression–I appreciate that Mr McMahon was not there–that they were supportive of that.”

FAC reject the use of Sacro schemes in cases of breaches of OBA, as they believe the legislation should be scrapped outright. They claim they made it clear to Wheelhouse in communications before his statements in the house that the only outcome campaigners were willing to accept was the repeal of the legislation.

“I ask the minister to withdraw his claim that his views on the extension of diversion from prosecution chime with those of fans against criminalisation. Nothing could be further from the truth.” Michael McMahon

FAC also claims that the comments were made despite them notifying one of Wheelhouse’s aides immediately before the session that it was not to be said that FAC supported the Sacro scheme.

In correspondence between FAC and Wheelhouse, which CommonSpace has seen, Wheelhouse confirms that no discussion had taken place with FAC representatives regarding the scheme.

The matter has since escalated, with Wheelhouse issuing a letter to FAC disputing the idea he was misleading in his comments, and FAC issuing an open letter to Wheelhouse on Tuesday (2 February) which accuses the minister of being “inncapable of admitting” that he misled parliament.

Speaking to CommonSpace Michael McMahon MP said: “Paul Wheelhouse clearly misled Parliament on that issue though he continues to claim that he did not. He points to an earlier answer which is quite wooly on the issue but in response to a direct question from me later in the debate he specifically claims to have FAC’s support for his position when he evidently did not.”

“The Minister did not mislead parliament; he gave his opinion, and it remains his view” Government Spokesperson

Answering the accusations, a Scottish Government spokesperson said: “The Minister did not mislead parliament; he gave his opinion, and it remains his view, that measures to avoid criminalising fans unnecessarily, such as is now being taken forward through the Sacro Diversion from Prosecution Scheme, respond positively to, or ‘chime’ with, one of the key concerns that have been raised with him by organisations including Fans Against Criminalisation and football clubs.

“The Minister has made clear he understands FAC’s stated position is that they seek to repeal the Act.”

Campaigners have complained that the OBA has poisoned relations between fans and police. In March 2013 hundreds of Celtic fans were kettled and 13 arrested in Glasgow.

In November 2015 CommonSpace reported on alleged incident of abuse committed by and Police Scotland officer against a young football fan.